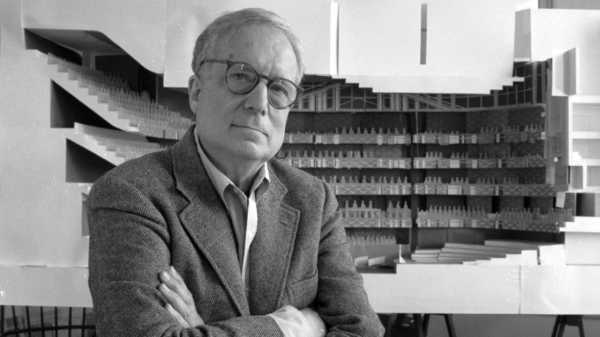 In 2001, when I was a freshman at Columbia, a close friend, a student of architecture who is now a professor of geography, took to trawling nasty comment threads online. He was an admirer of the neoclassicism of the Chicago World’s Fair, and he detested anyone—especially postmodernists—who treated its verities with irony or contempt. As I remember, and as he recalled to me recently, he found his way to a Web site called Architecture Hate Page, where he posted some disparaging remarks about the work of the renowned architects Robert Venturi and Denise Scott Brown. Some months later, he received an e-mail from Venturi, asking him to coffee. At a Starbucks near campus, he met both Venturi and Scott Brown. In his recollection, Venturi scowled at him for his misunderstanding, while Scott Brown seemed apologetic on both men’s behalf.

I thought of this story when Venturi died, on Tuesday, at the age of ninety-three. It shows not only that the Internet was always a venue for the idiocy of young men but that Venturi, one of the major architects of the twentieth century, was a teacher as much as he was a thinker. With him dies half of an extraordinary partnership, and, to some degree, an era of real seriousness about the aesthetics and ethics of architecture. It is hard to imagine architects of his and Scott Brown’s stature responding, today, to a random student’s pique, let alone engaging with him in debate. For both, architecture was a combat sport, but one that required wit and grace, as well as accommodation for the unusual, extrinsic, and incongruent.

This could come at a cost. In their books, the couple argued, in mandarin prose, for an aesthetic populism, which often led to misunderstanding. Their most famous text, “Learning from Las Vegas”—even the title was a troll—seemed to endorse letting the market decide what got built, and how: a sort of architectural neoliberalism. But its much quoted aphorisms (“Main Street is almost all right”) distracted from how their buildings actually worked. In truth, many of them were built for universities and, in keeping with that context, have a coded elegance that derives from Venturi’s studies of late Renaissance and Baroque Rome, when he was in residence at the American Academy.

Venturi was argumentative, but in the manner of a literary critic: he was a close reader of buildings. (He was influenced in this pursuit by T. S. Eliot and William Empson.) He admired structures with ambiguities and overloud statements, and wanted to produce them, even if what he and Scott Brown ended up creating was quieter and more understated. In his wonderful, example-rich book “Complexity and Contradiction in Architecture” (1966), he lauded what he called “super-adjacencies”—“the superimposition of various elements”—in building façades. super-adjacencies, he wrote, is

inclusive rather than exclusive. It can relate contrasting and otherwise irreconcilable elements; it can contain opposites within a whole; it can accommodate the valid non sequitur; and it can allow a multiplicity of levels of meaning, since it involves changing contexts—seeing familiar things in an unfamiliar way and from unexpected points of view.

It can accommodate the valid non sequitur: so much of Venturi and Scott Brown is contained in this statement. When I first moved to Philadelphia, where the couple taught since the nineteen-sixties, and where their work is well represented, I made a pilgrimage to the Guild House, a housing development for low-income seniors on a bleak stretch of Spring Garden Street. For anyone expecting a brash, postmodernist statement, the first impression of its symmetrical, unassuming brick façade is underwhelming. But sustained attention—something their buildings always require—begins to disclose its essential weirdness. The cartoon lettering of “GUILD HOUSE”, the squat, thick column of polished granite that bisects the recessed entrance, the chain-link fencing on the balconies, the elongated lunette window beneath the flat roof: these are the details that create drama and surprise in otherwise “normal” contexts. The windows, Venturi and Scott Brown would write in “Learning from Las Vegas,” “look like, as well as are, windows.” The statement is marvellous, a valid non sequitur. Of course the windows are windows. But they also recall “windows”—they estrange you, if only slightly, from what windows often are. 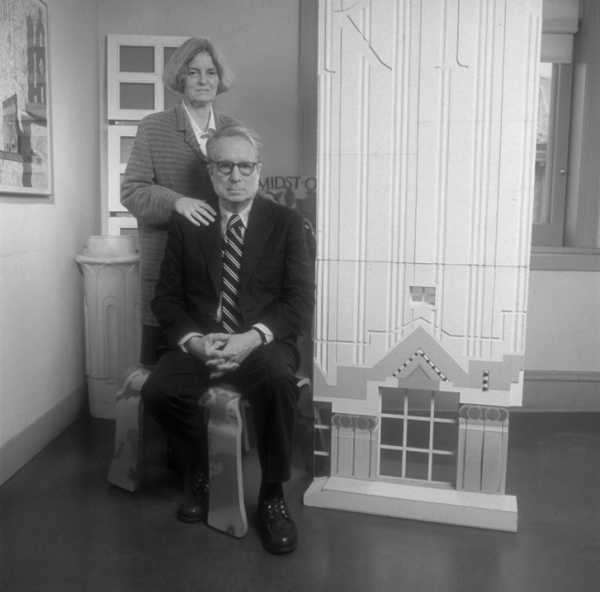 With Venturi dies half of the extraordinary partnership he shared with his collaborator and wife, Denise Scott Brown.

This sort of thing was naturally infuriating to many people, as were the paeans, in “Learning from Las Vegas,” to the detritus of American kitsch landscapes—billboards, signs, neons. The book cemented Venturi’s image as a postmodernist, even if it was an association he rejected. “I would like to make it plain that I consider myself an architect who adheres to the Classical tradition of Western architecture,” he once wrote, in a manner that seemed to protest too much. But it was true. In buildings such as the extension of the Allen Memorial Art Museum, at Oberlin, Venturi and Scott Brown produced a façade of checkered sandstone that, as the Times critic Ada Louise Huxtable pointed out at the time, recalled the rose-cream stone of the original Beaux Arts building, while also suggesting a nineteen-thirties industrial loft. There is much to “read” in the details—the roof overhang that is both Renaissance and Midwestern—but those details rarely clamor for attention.

As with all architects, Venturi and Scott Brown produced some junk, and, unfortunately, junk one has to live with. Welcome Park, built in 1982, outside one of Philadelphia’s few art-house theatres, is a strangely conceived space that flaunts scale and proportion until the joke falls flat. At its center, perched on a thick marble cylinder, is a comically undersized bronze of William Penn, the city’s founder, who presides over an almost invariably empty plaza. Not far away is a tiny model of the Slate Roof House, the city’s first house of government. The whole experience, which you have to repeat every time you see a film there, is ridiculous in a way that punctures the solemnity of Philadelphia's heritage—but it also denudes the city of a usable public space. It was one of the moments in which Venturi and Scott Brown, to their detriment, seemed to believe their own myth.

Still, some of Venturi’s most enduring work won’t be what he built but what he saved. His attention to the past meant that he was an ardent preservationist, and he often supported work that might otherwise have fallen to the wrecking ball of urban renewal. The Fisher Fine Arts Library, at the University of Pennsylvania, designed by the wild Gilded Age architect Frank Furness, is one of the most extraordinary buildings in North America, and we owe it to Venturi and Scott Brown that it has survived in its particular shape. A Victorian castle crammed with gargoyles, terra-cotta arches, and fine glass windows graced with aphorisms—a classic of super-adjacencies—it was, in the nineteen-sixties, on the verge of being torn down. Venturi, who adored the library’s “diversity, wit, tragic dimension,” helped conduct a restoration, which both opened up the building and clarified the strange side-traditions that his work carries forward.

The Fisher Library was also how Venturi met Scott Brown. In 1960, during a meeting about the fate of the building, she emerged as one of the fiercest voices for its preservation. After the meeting, she said, “another teacher introduced himself and told me: ‘I agreed with everything you said. My name’s Robert Venturi.’ And I replied, ‘If you agreed with me, why didn’t you say anything?’ ” The exchange began one of the most influential design partnerships of the last century—and, as with a similar partnership, that of Ray and Charles Eames, the woman’s contributions have been sidelined. In 1991, Venturi alone was awarded the Pritzker Prize for architecture, which shocked him; only in 2013 did campaigners try—unsuccessfully—to add Scott Brown to the citation. Meanwhile, a recent pair of exhibits in London displayed Scott Brown’s exceptional photography, showing just how much her understanding of vernacular landscapes contributed to their work. If there is a way to remember Venturi, it is by honoring his partner, who remains impoverished of attention. The knots tying her ideas to his are impossible to untangle, and to ignore.

Ryan Zinke spent his first year in office selling off our...