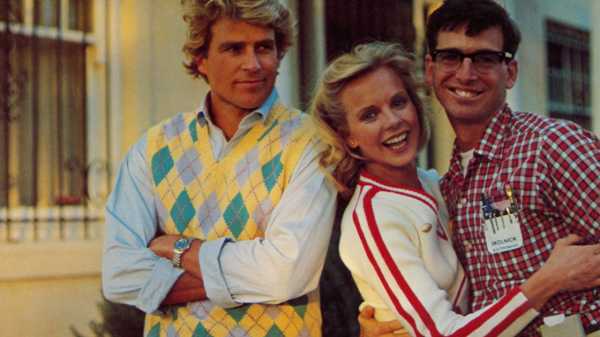 Earlier this week, the Times published a letter written by Brett Kavanaugh to his buddies, in 1983, in which he went over the logistics for renting a house on the Maryland shore for an annual prep-school rite of passage known as Beach Week. Among more mundane matters, Kavanaugh noted, with teen-age bravado, that any girls they might “beg” to stay at the house would be “welcomed with open . . . .” (his winking ellipsis there) and that it might be prudent to warn neighbors that “we’re loud, obnoxious drunks with prolific pukers among us.” When contacted about the letter, one of Kavanaugh’s former classmates called it harmless, and said, “It sounds like the script of ‘Revenge of the Nerds’ really.”

Kavanaugh’s nomination to the Supreme Court has surfaced its share of Gen X ephemera—including, perhaps most oddly, the British reggae band UB40, in connection with a New Haven bar fight. But this reference to “Revenge of the Nerds,” a raunchy college sex romp, from 1984, in which a group of freshmen outcasts form their own fraternity, Lambda Lambda Lambda, and enact vengeance on the jocks of Alpha Beta, seemed particularly, and rather sordidly, appropriate. The movie, a box-office and VHS hit that spawned a slew of sequels, is part of a genre of eighties comedies that features nerds, dorks, dweebs, and the otherwise misunderstood harnessing their superior intelligence and alleged greater humanity to outwit their beautiful but stupid tormentors. It’s the ultimate power fantasy for the dispossessed adolescent male. At the end of the movie, when Anthony Edwards’s character, Gilbert, sets off an “I am Spartacus” moment of nerd self-empowerment and campus-wide acceptance, backed by Queen’s “We Are the Champions,” the whole thing looks a lot like justice triumphant.

It’s not entirely clear what Kavanaugh’s classmate meant when he compared Georgetown Prep Beach Week to “Revenge of the Nerds”—it is difficult to map Kavanaugh and his crew onto the movies’ binary nerds-versus-jocks landscape. In many ways, Kavanaugh has been portrayed as a familiar entitled-jock type, a football player who prided himself on polishing off kegs and, even thirty-five years later, in testimony before the Senate, bragged about how often he virtuously lifted weights as a young man. All this would have made him a hated Alpha Beta in the world of the movie, the sneering guy with a broad chest, feathered hair, and a letterman jacket who is ripe for comeuppance.

But I think the reference to the movie was, instead, intended to downplay the real social power that Kavanaugh and his friends wielded in the summer of 1983. Seen in the best light, the letter reveals them to be nerds, even if they didn’t know it at the time, scrappy losers who took their attempts at adolescent high jinks too seriously and who were just out for their own lame version of eighties high-school fun. They were the kinds of guys who would, even among themselves, talk about sex and women elliptically, and with sad innuendo. Surely, they must have felt like big shiny fish, but even the jocks at a place like Georgetown Prep, compared to the athletes at the big public schools that surrounded it, were nerds.

The distinction between jock and nerd, however, doesn’t really matter—and this is the lesson of “Revenge of the Nerds” three and a half decades after its release. For such a popular movie, one filled with characters and quotes that entered a generation’s pop lexicon (Booger, wonder joints, etc.), I was surprised to see that it’s not available for streaming or purchase on any of the major digital services. (It’s for sale on Blu-ray, and as part of a “Guys Being Guys Party 3-Pack”; I eventually found a pirated version on YouTube.)

The movie’s absence for ready viewing makes sense. Its basic plot is monstrous, with the nerds, the nominal good guys, committing an escalating series of sexual crimes against their female classmates in order to get back at the men of Alpha Beta. After the Betas, along with their sister sorority, Pi Delta Pi, release a bunch of pigs into the Lambda house, the Lambdas go on a “panty raid,” breaking into the Pis sorority house, stealing their underwear, rushing into bathrooms to gawk at them naked in the shower, and planting hidden video cameras in the ceiling, which allow them to surveil the women after they have been chased off. The guys assemble back at the house, spying on the women changing, with Booger (Curtis Armstrong) demanding that the camera operator “pan down.” This may have been the filmmakers’ lame attempt to squeeze some “Porky’s”-style nudity into the movie, but the sight of the Lambdas shrieking and catcalling turns them from harmless geeks into outright predators. The whole thing, of course, is played for laughs.

And then it gets worse. Later, during the college’s Greek carnival, where the Lambdas are selling nude pictures of the Pis to their male classmates, Lewis (Robert Carradine), the movie’s nerd hero, dons the costume of Stan, the head Alpha Beta, and follows Stan’s girlfriend, Betty, into a fun-house tent. There, the two have sex, or, more accurately, Lewis commits rape by deception. Afterward, he takes off his mask, and Betty reacts with delighted shock. “You’re that nerd!” she exclaims. “God, you were wonderful. Are all nerds as good as you?” To which Lewis responds, “All jocks think about is sports. All we ever think about is sex.” In 1984, Lewis was framed as a nerd conqueror, but, really, he is the embodiment of every menacing incel fantasy, in which the hot girl is forced to acknowledge the virility of the man she has ridiculed and ignored. In the movie’s final scene, when Gilbert and Lewis and the rest of them are declaring their proud nerdiness, Betty ditches her boyfriend and joins Lewis in a swooning embrace.

All of this is grotesque, but it is especially so when considered alongside what the movie considers to be its essential message: that everyone, even the nerdiest or the weirdest or the lamest, deserves to be treated with respect. The only national fraternity that would back the nerds were the Tri-Lambs, a black fraternity, and the movie clumsily, but earnestly, links the assertion of nerd rights to the larger idea of civil rights. This push for greater acceptance, unfortunately, only extends to the men on campus. Earlier in the movie, the Lambdas seem to have found their female counterparts in the sorority Omega Mu, a group of so-called ugly women on campus who have a similarly eccentric set of intellectual interests and who, it turns out, love to party. Yet the Mus aren’t enough for the nerds of Lambda—they remain obsessed with the women of Pi, infatuated by their bodies and the promise that by desecrating them, they can prove themselves somehow better than the jocks of Alpha Beta. Say what you will about the Betas, but at least they weren’t rapists. Or probably they were, too.

As we’ve been tossed back into the swampy waters of nineteen-eighties youth culture in the past few weeks, there has been a jarring tension between how foreign so much of it seems, and yet also how familiar and persistent. “Revenge of the Nerds” would never be made in its current form today, yet its themes keep playing out, both onscreen and off. The real message of the movie is that, jock or nerd, young men share an essential thing in common—the need to prove their worth to other men by subjugating and mocking and victimizing women. Seen like this, the song that plays over the movie’s rousing finale, “We Are the Champions,” takes on a different meaning entirely.

Nancy Pelosi Says She Would Be Okay With Sanders as a...