Home Culture Review: “Ant-Man and the Wasp” Should Have Been the “Godfather: Part II”... 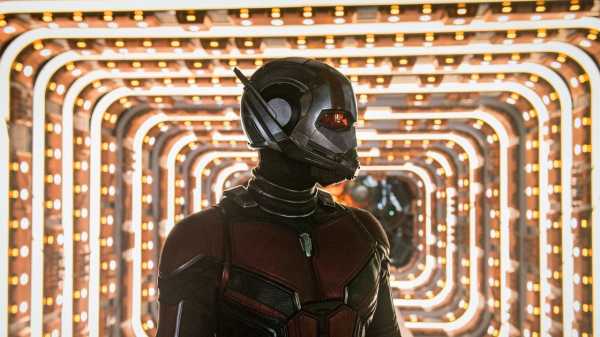 The original “Ant-Man,” from 2015, was a giddy delight, thanks to the inspired direction of Peyton Reed. Its domestic box-office take wasn’t much more than its budget, but international audiences turned it into a hit, giving it more than a half-billion dollars in ticket sales. That's why I had high hopes for “Ant-Man and the Wasp,” which, like the earlier film, is directed by Reed; I suspected that, on the basis of the first film's commercial success, this installment might be, in effect, the “Godfather: Part II” of superhero movies—a sequel made with even greater directorial freedom and audacity than the original.

No such luck. “Ant-Man and the Wasp” draws its premise and its range of action from another movie in the Marvel domain—“Captain America: Civil War,” in which Scott Lang, a.k.a. Ant-Man (Paul Rudd), makes a brief, astonishing appearance—and, unlike the earlier film, the sequel is closely tethered to the Marvel series in an array of methodical plot steps that feel like mandatory routines rather than freestyle inventions.

Owing to a suit created by the super-scientist Hank Pym (Michael Douglas), Ant-Man can shrink instantly to the size of a bug and beyond, to the atomic scale. In “Captain America: Civil War,” in which he displays the additional power to expand to colossal size , Ant-Man went rogue with rebel superheroes (led by Steve Rogers) and was arrested. “Ant-Man and the Wasp” begins about two years after the end of “Captain America: Civil War”: Scott is three days away from the end of his sentence of house arrest. He lives in the San Francisco area and runs a modest home-security business with his former partners in crime, and his paternal devotion to his young daughter, Cassie (Abby Ryder Fortson), provides a motive for him to live an ordinary life without superheroes after his sentence is up.

But, just when Scott thought he was out, they pull him back in: Hank and his daughter, Hope van Dyne (Evangeline Lilly)—who also wears a shrinking suit and works as the Wasp—effect some transformational wonders to bring him to their laboratory while leaving behind the ankle monitor he wears as part of his house arrest. They need him for a rescue mission: thirty years earlier, Hank and his wife, Janet van Dyne (Michelle Pfeiffer), also the Wasp, shrank to subatomic size for a battle, but Janet got stuck in the subatomic realm and hasn’t been back. Since Ant-Man, in the earlier film, proved able to both enter the “quantum realm” and exit it safely, they need him for a mission to bring Janet back.

Reed, who made “Down with Love” and “The Break-Up,” is the Rube Goldberg of modern comedy, and by far the best parts in “Ant-Man and the Wasp” involve action. Reed’s joyful comedic contraptions are on display early in “Ant-Man and the Wasp,” showing Hank and Hope dragging him into their quest by shrinking him down—along with themselves and their car, which now resembles part of a Hot Wheels set and zips under and between regular vehicles on the road. The Hot Wheels trope becomes explicit later in the film, with a set of toy-size cars, packed in a carrying case, that are ready to be expanded and driven—and the boxed-set concept gets another brilliant tweak when, in the interest of safety, Hank shrinks his entire laboratory building to resemble a small suitcase, which he tosses into his car—and then is able to blow it back up to full size. “Ant-Man and the Wasp” is filled with deft and surprising trickery involving size and scale. A supercut of these scenes would be a giddily kinetic short film, one altogether more gratifying than the feature into which they’re slotted.

Instead, the plot that lends these sequences their dramatic stakes is unfortunately assembled from a kit of commonplaces and conveniences, including a very significant mind-melding dream with quantum implications. There’s a MacGuffin involving an extra part needed for the ultimate subatomic descent to rescue Janet; to that end, Hope meets the nefarious arms dealer Sonny Burch (Walton Goggins) in a fancy hotel restaurant, and a mighty but whimsy-infused fight results—amped up by the arrival of yet another combatant, Ava, a.k.a. Ghost (Hannah John-Kamen), whose jittery aura offers ornamental delight to match her power to pass through matter. Ghost suffered an atomic-level catastrophe years earlier (as seen in a flashback), and her powers are also her vulnerability: she’s on the verge of disintegration and needs Hank’s technology to restore her molecular structure. (Her plight also involves another franchise-centric subplot, involving Hank’s former friend and colleague, the scientist Bill Foster, played by Laurence Fishburne.)

The plethora of backstory (whether of Ghost, the mother and daughter Wasps, Pym, Bill, or others), specific but impersonal, defining characters by narrowing them to one main trait, is only one of the many simplistic dramatic struts on which the story is sustained. Not only does “Ant-Man and the Wasp” lock its characters and its actions in the Marvel mechanism; it reduces the story’s emotional range to the characters’ least common denominators (without any of the political vision of “Black Panther” or the loopy wonder of “Ant-Man”). Reed’s earlier films energized their antic contraptions with boldly modernized reconfigurations of romantic comedy, and the very title of “Ant-Man and the Wasp” highlights the push-and-pull coupling at the movie’s core. Hope saw Scott’s rebel action in “Captain America: Civil War” as a betrayal, and she reminds him that, had she gone with him, he wouldn’t have been caught. Their mild bickering and bland bantering wink at rom-com tropes without revising or deepening them; their romance is utterly devoid of substance and surprise. Though Hope is one of the title characters, she’s treated like a dramatic appendage.

As he did in the earlier film, Reed again extracts comedy from the gabby habits of Luis (Michael Peña), Scott’s business partner, morphing Luis’s frenetic way of telling stories into onscreen flashbacks with idiosyncratic lip-synching. Reed has fun with the officious intrusions of the nerdy F.B.I. agent Jimmy Woo (Randall Park) and with a gallery of bewildered bad guys, and he extracts a maximum of radiant glamour from Michelle Pfeiffer’s minimal screen time. Her presence and her performance exemplify the peculiar paradox of many superhero movies (fortunately, there are notable exceptions): they’re long and demanding to make, but the actors who exert themselves in them have very little leeway, little space and time, in which to act. Their snippety and constrained performances are turned, above all, into symbols; their stardom counts more than the performances they’re allowed to give.

Reed, in his earlier films (and even in “Ant-Man”) revels in his control of time as well as of space: he gives his actors a framework, and an actual onscreen frame, within which to work, and to work out the dimensions of the action and of their role. He’s the creator of one of the most ingenious long takes in recent years—it’s the dénouement of “Down with Love,” which is the springboard for a tour de force by Renée Zellweger. “Ant-Man and the Wasp,” with Pfeiffer, Douglas, Lilly, Rudd, Fishburne, John-Kamen, Peña, Woo, and many other excellent actors, ought to be a similar feast of performance. Instead, it’s a lesson in how little great actors need to be permitted to do in order to radiate the allure of star power—and in the difference between a movie that capitalizes on its actors and one that engages with their inspirations.

The Infuriating Innocence of Mark Zuckerberg |

We have unfinished business in the Champions League – Klopp