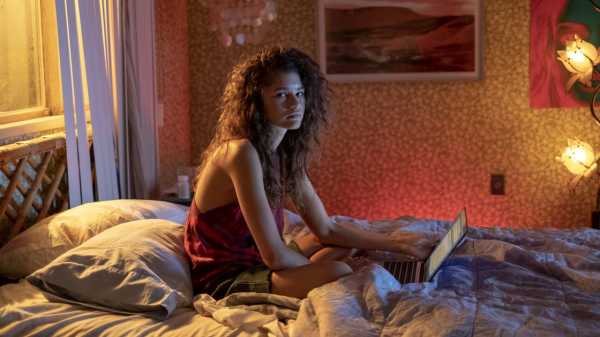 Attempts to know the soul of the new generation always tremble with the fetishes and the embarrassments of aging ones. In this week’s Newsweek, for instance, a group of smiling, multiethnic students are trotted out as representatives of the post-millennial cohort that’s become known as Gen Z. Graduates in the college class of 2019, they have been “raised by cynics,” the magazine tells us, and have reacted by becoming “clear-eyed, economic pragmatists.” They will avoid the mistakes of their sinner predecessors—the gig economy and the Internet’s irony-poisoning, climate-change ambivalence, and millennial listlessness. Stern and chivalrous and goal-oriented, new-age patriots and effective workers, they will pull the planet back into orbit.

“Euphoria,” a new teen drama from HBO and A24’s television company, is here to denude us of such naïve thinking. It styles itself as a punishing Gen Z exposé, channelling the spirit of movies like “Kids” and “Gummo,” here to make “Skins” seem basic. Last week the president of the Parents Television Council warned that the show “appears to be overtly, intentionally, marketing extremely graphic adult content—sex, violence, profanity and drug use—to teens and preteens.” But “Euphoria,” which is interestingly naïve itself, will destroy the innocence only of adults who wish to maintain the illusion that sex, violence, profanity, and drug use, not to mention revenge porn, are not in the province of high-school life.

That said, I shouldn’t undersell the bleakness of “Euphoria.” There are dead-eyed, graphic sex scenes, nonconsensual-sex tapes, beatings, underage camming, and chronic male nudity. In the pilot episode, our protagonist, Rue Bennett (Zendaya), her narration heavy like medicinal syrup, explains that she was born only days before 9/11; the planes crashing on loop on television was her generation’s first film, their primal political event. Seventeen years later, Rue is an addict. Her sister Gia (Storm Reid) found her overdosed in her bedroom. Her drug of choice is pills, mostly, that she buys (on credit) from a regretful dealer and his face-tattooed partner. When Rue consumes them, she is overcome with a rush of the opposite of the show’s title: nothingness, a pitch blackness, a silence that is like, she hopes, being dead. Rue’s habit is self-medication, an overcorrection to the stifling regimen she was put on as a young child to help manage O.C.D., anxiety, and a personality disorder. At the beginning of the show, she has just returned from rehab, where she didn’t so much get clean as get cunning. The urine of friends, kept warm in little pharmaceutical bottles strapped to her thigh, tricks her mother’s at-home drug tests.

Our omniscient storyteller, Rue gives us the backstory of the show’s three other major characters: her best friend, Jules Vaughn (Hunter Schafer), a repressed jock named Nate (Jacob Elordi), and Kat (Barbie Ferreira), a smart-aleck who hides a secret Internet life. The portrayal of this hot-girl friend group is cannily sensitive to how teen-aged society has progressed; when Kat tells her friends that she’s a virgin, they scold her warmheartedly. “Bitch, this isn’t the eighties. You need to catch a dick!” Zendaya, a twenty-two-year-old actor and singer, is the best part of “Euphoria.” It becomes difficult, and then absolutely silly, to recall the pink outlines of her early career on the Disney Channel, so grandly does she inhabit this dark new role. She understands the neediness of her character: that Rue, at heart, wants nothing more than to be loved; that her chemical cravings work in service of a spiritual one.

The second-best part of “Euphoria” is Schafer as Jules—a young trans woman playing a young trans woman. A high femme newcomer in town, Jules marks her introduction like a spirited combatant, picking up a knife and drawing her own blood. (It’s a callback to a history of self-harm, we’ll later learn.) Jules is a drug for Rue, but a good one. Their noses touch in bed at night, and what courses between them is platonic, romantic, filial all at once. They trip on pills with happy faces stamped on them; while high, Rue thinks that they are both crying glitter. The electric stirrings we felt as young girls, reading best-friend adventures that we so desperately wished would rise into romance, emerge again seeing these two.

Rue and Jules’s relationship is the jewel of “Euphoria.” I’ll keep watching because I desperately want to protect them. Otherwise, the show so far (I’ve seen four episodes) is a highly self-conscious study of ennui, overfull with fancy camera tricks and thousand-dollar designer getups. Drake lends his name as executive producer, and the episodes glow like music videos. As in “Assassination Nation,” Sam Levinson, who has done most of the writing and directing of “Euphoria,” which is based on an Israeli show, creates a glamorously trippy suburbia that distracts us from the story’s thinness, its reliance on vintage tropes on the subject of teen-aged self-abasement. Rue’s highs are diegetic: the camera spins as her head spins; she walks on walls and we are upside-down. There is a stunning long sequence in Episode 4 that takes place at the town carnival, featuring Rue, Jules, and a closeted family man whom Jules has met on Grindr.

Like Rue, you will hate what that man has done to Jules in a dark motel. And Jules, painfully sophisticated, will tell Rue, who is occasionally a proxy for the horrified audience, that there are experiences she must abide in order to feel desired. That man ends up pleading with Jules, but another man, a teen-aged peer, physically threatens her just moments later. Here and throughout, “Euphoria” overcorrects in its strain against wokeness and didactic optimism. You think Generation Z is sexually liberated, politically engaged, emotionally self-aware? Think again, “Euphoria” retorts, shoving a dick pic in your face. Like a surly teen-ager, it wallows, refusing to let itself or anyone feel good. The show forgets to be funny at all until the third episode, which focusses on the sardonic and insecure Kat, played by the influencer model Ferreira. She wears glasses—the universal sign, onscreen, that a woman isn’t seen as attractive—and writes One Direction fan fiction in which (ripping from a real-life Tumblr theory) two of the boy-band members are secretly fucking; she might be the only character that thinks of sex as a creative force. (A spoiler: you might not be able to stomach the swerve of a sixteen-year-old deciding to work as a cam girl, but you have to respect the resolute realism of it.) Often, “Euphoria” feels like two different shows: one that coolly epitomizes sexual fluidity and contemporary teen angst and modern addiction, and another that is relentlessly stylized and pornographically sad.

Still, I happen to prefer “Euphoria” ’s melancholy over the gooey liberalism of a film like the recent teen-girl comedy “Booksmart.” How you like your Gen Z prophesying is, ultimately, I suppose, a matter of taste. Levinson, who is thirty, is a recovering addict, and he’s said that he has written “Euphoria” partly from personal experience. The affection he has for fuck-ups like Rue, and for romantics like Jules, shines through his show’s peacocking. So does Levinson’s sincere fondness for those kids whom he imagines need a show like “Euphoria,” to reflect back to them an image of their lives that defers to their pessimism, that treats them like the sinners they are, or, maybe, want to be. But the show’s opening, with its indictment of a damaged nation repressing the instincts of its children, sets us up for a return I’m not sure is coming. “Euphoria” is a love letter that hasn’t figured out a coherent love language.

EU May Use EIB to Help European Companies in Iran Amid...

The scorched-earth Senate battle between a convicted coal boss and Mitch...