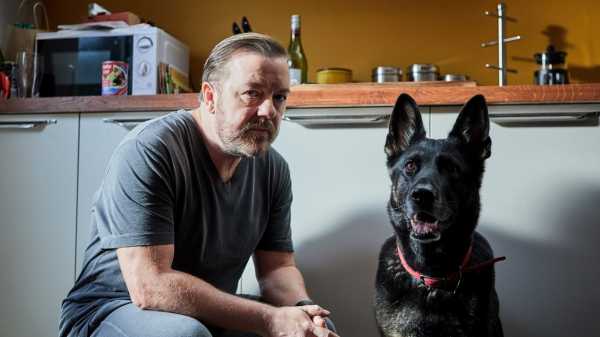 Grief is a mainstay of much recent television, via the Gothic bathos of “The Haunting of Hill House,” the destabilizing absurdity of “Kidding” and the rich meditations of “Sorry for Your Loss,” and also the third season of “True Detective” and the forthcoming final season of “Catastrophe.” “The Widow” (Amazon) and “After Life” (Netflix) are less explorations of grief than tepid exploitations—both shows treat bereavement as an easy way to raise the dramatic stakes but only cheapen the lives of their grieving protagonists. These are dirges arranged for easy listening.

“The Widow” stars Kate Beckinsale as the poshly bereaved Georgia, whose mourning dress involves many layers of tasteful woollens. We first spot Georgia suffering comfortably (Barbour coat, Land Rover) in gloomiest Wales (rocks, clouds), three years after her dear husband went to the airport on the morning of their anniversary (golden light, thoughtful gift) and died in a plane crash in the Congo (green trees, black faces). Doomed to suffer, Georgia slips on one of the Welsh rocks and cuts her leg on another, ruining a fine pair of trousers.

Watching TV in the emergency room, Georgia thinks she sees her husband in news footage of sub-Saharan unrest and bolts to Africa in pursuit. We shuffle among various locales and mosey along an asynchronous time line, and it is fortunate that frequent onscreen titles identify the time and place of the action, because it is difficult to sort out, when taking in the bland gray glossiness of the whole, the difference between Kinshasa and, like, Heathrow Airport. Or, for that matter, Rotterdam, where we meet a man who claims he lost his sight in the crash. “I—I could have lost much more,” he says. “I know that. Many others did. Much more. Much more.”

The introduction of the Netherlands as a locale may inspire viewers to start puzzling out a connection between “The Widow” and “Heart of Darkness,” but the show cannot withstand that level of scrutiny. Nor do I recommend searching for coherence in its post-Colonial politics, what with the servant-like assistance Georgia receives from a Congolese friend who helps with investigation and exposition. The show must be received as a thin melodrama sweatily elevated to a respectable brow height by its pretensions—its undertones of “Lost” and of John le Carré. “The Widow” is to international thrillers what “The First” (on Hulu, with Sean Penn as an astronaut mooning after his expired bride) is to science fiction. The shows share a slow pace, a soft light, and an air of designer melancholy.

The qualities are, on the bright side, soothing, where the first season of “After Life” (Netflix) offers agitating feints at reckoning with bereavement. It’s a six-episode comedy written and directed by Ricky Gervais, who stars as a prickly widower in a cozy English town. The character, Tony, has treated his wife’s death—from cancer, at age forty-five—as a license to unleash a tart tongue. At work, as the editor of fuzzy feature stories at a small newspaper, he casually crushes the dreams of cub reporters and optimistic bosses. Around town, he is just plain rude. “You want to punish the world as a result of your loss,” his therapist says, in a statement too obvious to qualify as analysis.

A main problem for “After Life” is that Tony’s surge of misanthropy isn’t especially funny or smart. An outburst directed at a waiter is merely a slip of basic observational comedy about ordering off the children’s menu. An atheistic riff has the tepid flavor of a tween’s impersonation of a twenty-year-old Bill Maher bit. “After Life” plays as if Gervais had gathered material that was not quite sharp enough to earn a place in his standup act and repurposed it for scripts as tidy as store-bought condolence cards. The viewer’s most acute feelings of loss apply to Stephen Merchant, Gervais’s collaborator on “The Office” and “Extras,” whose wit is sorely missed.

“After Life” posits that confronting the loss of a loved one is equivalent to shaking off a case of the grumps. Tony is supposed to be suicidally devastated by the death of his wife, but Gervais doesn’t seem terribly committed to the gravity of the characterization. His occasional flashes of anger are stirring, as when Tony, feeling that he has nothing left to lose, slugs a mugger with a can of food intended for a dog. I liked the moment where Tony connects with a sex worker: she’ll do anything for fifty quid, so he hires her as a cleaning lady. But Gervais’s play-acting of despair is fundamentally trifling, as is his development from a nihilist who thinks that “there’s no advantage to being nice and thoughtful and caring” to a nice, thoughtful, caring guy. A dark comedy this superficial only reads as light gray, on account of the sham sunlight glaring at the end of its tunnel.

How to become a referee: From grassroots to Premier League