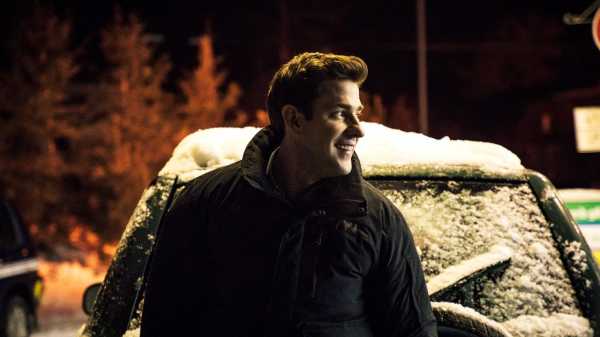 Tom Clancy’s most famed protagonist, Jack Ryan, is a morally perfect C.I.A. analyst with a background in the Marines and a calling to save the world. In screen adaptations of the author’s techno-thrillers, Ryan is far less flashy than the likes of James Bond and Ethan Hunt, and he’s possessed of a self-righteousness we’re meant to approve of. The challenge facing any actor in the part is to enliven a figure whose visionary thinking—his powers of deduction and intuition, his way of asking questions that his colleagues are too idiotic to pose—is proof of his purity. In “The Hunt for Red October” (1990), Alec Baldwin exulted in Ryan’s brilliance with a showman’s panache, as if the character were not stooping through a submarine movie but skipping through a dance musical; sidearm drawn, he shimmied into his shooting stance with a wiggle of his hip. In “Patriot Games” (1992) and “Clear and Present Danger” (1994), Harrison Ford played Ryan as a family man trembling with grit. Ben Affleck furrowed his brow at loose nukes in “The Sum of All Fears” (2002), and Chris Pine, in “Jack Ryan: Shadow Recruit” (2014), flared through a plot tuned to anxieties about global finance and through fight choreography swiped from the “Bourne” franchise.

In the new Amazon series “Tom Clancy’s Jack Ryan,” the role goes to John Krasinksi, who, even after directing and starring in this year’s sci-fi horror film “A Quiet Place,” is indelibly the cute and sensitive Jim Halpert from “The Office.” In “Clear and Present Danger,” one antagonist—a national-security official conducting black ops in ethical gray areas—tells Ford’s Ryan, “You are such a Boy Scout!” But that was just an empty insult of his high-mindedness. Throughout this eight-episode season, Krasinski really does resemble a person in pursuit of a merit badge, and the creators of the series, Carlton Cuse and Graham Roland, rely on his man-boyish charm. The actor’s affable modesty helps to sell Ryan’s grace-under-pressure heroics, as when his game face collapses into jitters after he coolly kills a terrorist. Elsewhere, he seems incongruously cuddly. When his shortsighted superiors balk at his ideas, he pouts like a disappointed basset hound. While tailing an armed suspect into the Alps, he receives dating advice from a French policewoman. “Be confident, sexy, funny,” she says, coaching him in crafting a text message. “You are a wolf, remember?” In reply, Ryan raises his eyebrows, like Jim in “The Office” breaking the fourth wall with a stare. But the whole bit just breaks the mood.

The story picks up when Ryan, monitoring financial transactions from his desk at Langley, notices a suspicious pattern of transfers in Yemen and brashly goes behind the back of his new boss, James Greer (Wendell Pierce), to freeze nine million dollars of shady money. Greer, an excellent operative fallen from grace, is a by-the-rules guy with a by-the-books gruffness. When he learns, through the Treasury Department, what his subordinate has done, he says, inevitably, “Ryan! My office! Now!,” as if barking out a mating call. Pierce, like Krasinski, is once and forever tied to his first major TV role, as Bunk from “The Wire.” Here, our tenderness for the actors’ familiar personae mingles with our affection for the characters’ archetypes, which are more familiar yet. But “Jack Ryan” ticks all the buddy-cop boxes with a freshly sharpened pencil. When Greer concludes the meeting—“Get the fuck out of my office!”—the two have consummated their professional relationship. Their chemistry is certainly more persuasive than Ryan’s perfunctory love affair with a cheerful epidemiologist (Abbie Cornish).

The series proceeds with the squareness and solidity of a CBS procedural, but one graced with the luxuries of an HBO budget. Transcending their desk-bound fates, Ryan and Greer venture to a military base in Yemen, through the immigrant slums of Paris, and across the paths of traffickers in Turkey, encountering one impressive conflagration, or at least one efficient action sequence, per episode. Their quarry is a go-getting jihadist, Mousa bin Suleiman (Ali Suliman), who has some kind of lucrative enterprise going in Syria. But what he really wants to do is establish a caliphate. Pulpy but humane, “Jack Ryan” plays like an old-school crime melodrama—like a gangster film devoting sensitive attention to social problems—when it flashes back to depict Suleiman’s disaffection and radicalization and when, in the present, it lingers on the plight of his wife (Dina Shihabi), who is weirded out by all the sarin around the house. The show’s geopolitical analysis posits Western Islamophobia as one instigator of Middle Eastern Islamofascism; diagnosing a global epidemic of post-traumatic stress disorder, it forbids jingoism. Its skepticism about American power is true to the outlook of a character who, in earlier installments, rose above the petty paradigms of his own government.

In a subplot with the flavor of a lavish allegory, a Nevada-based drone pilot (John Magaro) starts to crumble under the strain of killing distant people, some of them innocent, by joystick. His crack-up echoes against the struggles of the main characters. Greer, we learn, was cast back to Langley after making an uncharacteristic error of judgment in Pakistan. Ryan, sleepless in his bed, flashes on his backstory as the lone survivor of a helicopter crash in Afghanistan. Then he heads into the office in the middle of the night, and thinks through detective work while resting his cleft chin on a fist clutching a baseball. He’s an Orioles fan, but a snippet of workplace small talk demonstrates that his intellectual capacity extends to a comprehensive knowledge of Major League Baseball statistics. Only the national pastime will suffice as an emblem for this action hero. “Jack Ryan” is aware that Jack Ryan exemplifies American ideals in a way that the country itself never could.

An FDA panel is ruling on a new Philip Morris product...

The Latest Dreams of Barbara Hillary, the First African-American Woman to...