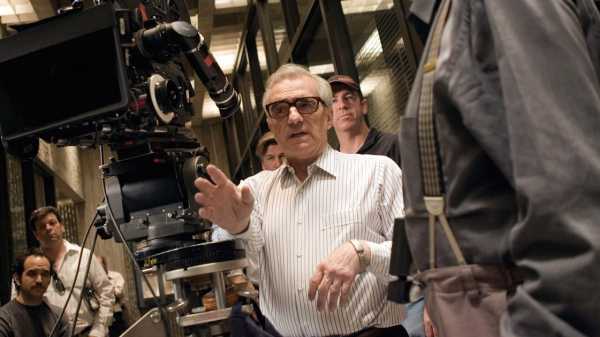 In 2015, on the stage of the Museum of the Moving Image, Jerry Lewis and Martin Scorsese discussed a major innovation in movie technique: the video assist, a video camera linked to a movie camera so that the director can see, on a TV screen, what’s in the frame. Lewis invented such a system himself and first used it in 1960, for “The Bellboy,” the first feature that he directed. Eventually, it became standard equipment on movie shoots; until then, Scorsese said, directors “were blind,” unable to see what was actually being filmed.

The invention of the video assist is, in effect, the virtual star of the extraordinary documentary “Notes on an American Film Director: Martin Scorsese,” which is centered on Scorsese’s work on “The Departed,” in 2005, and which is getting a rare screening, on Wednesday, at Anthology Film Archives. The venue is fitting: the director of “Notes on an American Film Director” is Jonas Mekas, one of the founders of Anthology (which opened its doors in 1970). Mekas, who died in January, was eighty-two when he filmed Scorsese at work. They’re something of a cinematic odd couple; Mekas is a celebrated movie-diarist, who, starting around 1950, carried a small movie camera around, as if it were a pencil and sketchbook, and made a vast series of film-diaries. Scorsese, by contrast, is the consummate industrial artist, whose vast inspirations are inseparable from his mastery of the elaborate techniques—and the administrative and bureaucratic complexities—that come with making major studio films. Scorsese and Mekas became friends in the late nineteen-sixties, when Scorsese, then a recent N.Y.U. film-school graduate, was beginning his movie career and Mekas (a leading film critic and programmer and also a filmmaker) was already a mainstay of the New York film scene. When he asked to film the shoot of “The Departed,” Scorsese welcomed him.

From the start of the film, Mekas weaves his own presence, and his preëxisting bond with Scorsese, into the action. The documentary begins with Scorsese greeting Mekas and meeting Mekas’s son, Sebastian, who also operated a camera, as they arrive on location in New York. There’s the potential for vanity in Mekas’s self-depiction in connection with Scorsese, but Mekas plays it down and deploys that connection in the service of the film—it explains why Scorsese and his cast and crew seem at relative ease around him and Sebastian, and it also gives rise to casual conversations with Scorsese, between takes, that illuminate his own background and artistic interests. Mekas and Sebastian let themselves be heard on the soundtrack but are seen only as hands at the edge of the frame.

Their darting and agile cameras observe, from afar, the setup of a scene from “The Departed,” in which Leonardo DiCaprio, Ray Winstone, and another actor playing a criminal hustle out of a room in a hurry. The sequence sets a tone: the documentarians see the actors acting as if their performances were a sort of snippety theatre, and they then join Scorsese huddling in a tent with other crew members, perhaps a hundred feet from the action, with headphones on, perched intently in front of a video monitor with the movie camera’s widescreen frame outlined on it in white adhesive tape. (That area is called, on movie sets, “video village.”)

As the shoot of “The Departed” shifts through a variety of locations in New York and Boston, outdoors and inside, Mekas emphasizes the back-and-forth between the live action of the performances and the images that Scorsese makes of them. Much of what the actors do in the film appears, from the perspective of the documentary filmmakers, to be banal: DiCaprio is seen sitting on a bench inside a private house in front of a wall of photos, and then another actor comes into the room through a doorway; DiCaprio and Winstone run from a house to a car and drive off; DiCaprio walks on a crowded street at night amid a throng of extras, or enters a home and hands Vera Farmiga an envelope.

But Scorsese, seeing the action on his monitor, in a frame that he composed, displays the art of filmmaking as if it were musical composition. In some of the most affecting moments in the documentary, Scorsese, sitting in front of a monitor far from the action, unable to see DiCaprio and Farmiga and unseen and unheard by them, watches their performances intently and raises and waves his hands, gesturing elegantly and expressively in irregular but graceful rhythms as if he were not following them but conducting them. The images that Scorsese produces convey a sort of geometrical form and also a gestural rhythm, which combine to elevate the actions, to reveal the spirit and the energy of the actors as if he were taking virtual MRIs of their inner lives.

During Scorsese and Mekas’s conversations between takes of “The Departed,” they talk about the revolution in cinema, in the arts over all, that was taking place at the time they met, and Scorsese cites the experimental films that he was seeing in school at the time—films by Stan VanDerBeek, Ed Emshwiller, Bruce Conner, and Stan Brakhage. “The images were just so alive, you had no idea. It was a whole new world, really, completely; it was a reinvention of how to speak, cinema language, the eye, how to see . . . this was a new way of looking at things.” Scorsese adds that he had such an experience later on, too, watching films by Brakhage while he was making “GoodFellas.”

It’s possible that Scorsese is merely displaying the charm of a gracious host, speaking to Mekas about the kinds of films that he knows are Mekas’s main interest. Nevertheless, Scorsese’s remarks suddenly seem to graft themselves onto the images that Mekas shows him framing on his video monitor. Mekas, in effect, shows Scorsese to be a master abstractionist: where some filmmakers create surrealistic and nonrepresentational images by means of camera maneuvers and special effects, Scorsese finds those things in simple and practical actions—and, in the process, shows how and why he relies on a vast crew and an overwhelming mass of equipment to film them. While telling a straightforward story with clear dramatic psychology, recognizable situations, and familiar characters, he imbues those stories with a mighty inner tangle of visual forms that are as crucial to the experience of the movie as the drama itself.

Scorsese is charmingly self-deprecating about “The Departed”—after describing the story to Mekas as a tale about informers, the police, and gangsters, he adds, “I guess it’s like other movies I’ve made.” He also tells Mekas that his adoption of video assist is recent: starting with “The Color of Money,” from 1986, he was able to watch the filming on a video monitor; with “Gangs of New York,” from 2002, he moved to the higher technical sophistication of video playback (i.e., the recording of the video, so that he can instantly rewatch what was just filmed). I’ve long contended that the great surge in Scorsese’s artistry over the past decade resulted from the emotional liberation and the status that arose from his long-awaited Oscar for Best Director (albeit for “The Departed,” which is, I think, far from his best film). What Mekas’s documentary shows is that, during that same period, Scorsese was also mastering a new technique, entering a new realm of creative power, thanks to video playback. There’s an increased complexity in his later films, notably “Shutter Island” and “The Wolf of Wall Street,” that would have been unthinkable in his earlier work, great as much of it is. In observing Scorsese at work, Mekas, the hands-on diarist, reveals, with admiration and wonder, the most rarefied realm of industrial cinematic inspiration.

Will the Saudi Kingdom Collapse Under the Resource Curse?