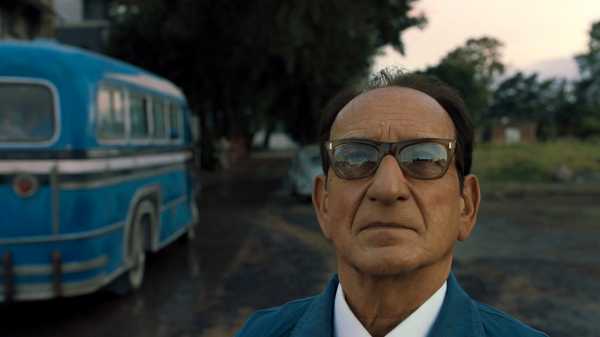 The story of the capture of Adolf Eichmann in Buenos Aires, in 1960, by Mossad agents, and Eichmann’s extradition to Israel, where he would stand trial the following year, is dramatized, in the style of a thriller, in Chris Weitz’s new film, “Operation Finale.” The movie separates fairly neatly into three parts: the action, the backstory, and the didactic element. They mesh throughout the film, but they each provide distinctive emotions and elicit different ideas; they might as well be different films.

The action, realized in copious and meticulous detail (thanks to the script by Matthew Orton), is engrossing, and Weitz brings it to the screen with a clear, brisk, and energetic, albeit unoriginal, blend of espionage-centered action and dialogue-centered behind-the-scenes planning. Which is to say that it’s an ordinary—but very enjoyably ordinary—movie about an extraordinary subject, and it gets its emotional juice from this very disproportion: a set of intrepid but banal, tiny, carefully calculated actions that weigh very heavily in the scales of history.

The protagonist, Peter Malkin (Oscar Isaac), is a young agent who, as first seen, in 1954, in Austria, has screwed up—in quest of another Nazi, he killed an innocent person. His boss, Isser Harel (Lior Raz), doesn’t dismiss the misdeed, but he still has confidence in Peter, and makes him the point man on the team that travels to Argentina to spot and kidnap Eichmann. The capture of Eichmann (Ben Kingsley) requires him not to scream or try to flee—and so a doctor, Hanna Regev (Mélanie Laurent), also comes along, to tranquillize him. But Hanna also happens to be Peter’s ex, and he’s hoping to restart their relationship.

The backstory includes scenes from the Holocaust depicting the murder of Peter’s sister, Fruma (Rita Pauls), and her young children and showing Eichmann present, as the commanding or at least supervising officer, at a scene of mass murder, where Jews were forced into a pit that they were made to dig and then shot by a group of Nazi troops. Weitz’s cinematic imagination isn’t up to these unbearable, nearly inexpressible horrors. He shows with sentimentalizing exaggeration the murdered Jews’ pleading, the Nazis’ cold indifference or callous taunting, Eichmann’s quasi-martial bearing, the sight of corpses—images that fall into familiar rounds of dramatic emotion, approximate and ready-made iconography that both aestheticizes and trivializes. The movie would have been much stronger without these flashbacks, which seem to exist only to provide viewers with visual confirmation of Eichmann’s involvement.

The core of the film involves the efforts to get Eichmann, who has been living in Argentina under the pseudonym of Ricardo Klement, from captivity to Israel. (Raz brings a fierce intelligence and a controlled fury to the role of Harel.) The Mossad has set up a safe house where Eichmann is being held. To get him out of the country on a regular El Al flight, he’ll be disguised as one of the airline’s pilots. But, to let the plane fly out of Argentina, the Israeli government requires that Eichmann agree to his extradition to Israel. So a half-dozen agents arrive at the safe house to persuade the captive Eichmann to sign the extradition agreement, and to get him to do so as quickly as possible, because they know that they’re being hunted by Eichmann’s allies.

The dramatic conflict pits the Mossad team’s veteran negotiator, Zvi Aharoni (Michael Aronov), against Peter, and this is where the film draws a clear line in the historical record. Aharoni’s methods are by-the-book; Peter, by contrast, far from seeking to break Eichmann, tries to treat him individually, with attention to his own particular needs, fears, and desires. (What’s more, because of Peter’s earlier violence against Nazis, his fellow-officers are afraid to leave him alone with Eichmann—lest Peter kill him.) Here, Weitz and Orton (who based the script on a memoir by Malkin) offer a valuable corrective to the view of Eichmann that was presented by Hannah Arendt in her 1963 book “Eichmann in Jerusalem” (which initially appeared as a series of articles in The New Yorker). Arendt’s book is a crucial work of history that set out the Nazi regime’s crimes in careful and fulsome detail. But she rendered the character at the center of it blank, reduced him to a faceless functionary whose alleged inability to speak anything but “officialese” was a mark of “an inability to think, namely, to think from the standpoint of somebody else.”

Arendt in effect theorized Eichmann out of existence by means of her own intellectual snobbery; she defined mental life and found that Eichmann didn’t meet her standards, and she thereby diminished his moral agency. The emptiness at the center of her portrait of Eichmann has been filled in by recent scholarship, including David Cesarani’s “Becoming Eichmann,” from 2004, Bettina Stangneth’s “Eichmann Before Jerusalem” from 2014, and Claude Lanzmann’s 2012 film, “The Last of the Unjust,” in which Benjamin Murmelstein, a Vienna rabbi before the Second World War, describes his own years of enforced work under Eichmann, both in planning the deportation of Jews and the management of the concentration camp Theresienstadt, a sham intended to portray the Nazi regime’s policy toward Jews as relatively humane.

Cesarani discusses the ferocity of Eichmann’s anti-Semitism—no mere bureaucrat, Eichmann enacted anti-Jewish projects with the passion of a true believer. Stagneth, relying on newly accessible documents from Argentina in Eichmann’s own hand, along with the so-called Sassen interviews, recordings that Eichmann made in Argentina in the fifties in the company of sympathizers (as dramatized briefly in “Operation Finale”), reveals the unabated intensity of his anti-Semitic and pro-Nazi views, and also his unrepentant, even proud, discussion of his involvement in the mass murder of Jews. Murmelstein, interviewed in the course of a week by Lanzmann, in 1975, details the cold cruelty with which Eichmann—even while claiming a sort of passionate interest in Jewish history, religion, and culture—guided, with focussed and cavalier enthusiasm, a massive system that dispatched Jews to their death.

In “Operation Finale,” Eichmann, when he’s arrested, claims to be Ricardo Klement and a Jewish refugee. (Eichmann even recites the fundamental Jewish credo, the Shema, in Hebrew, to make his point.) Eichmann, as portrayed by Kingsley, has a fierce but narrow intelligence, a warped but strong sentimental streak. In his discussions with Peter, Eichmann claims to have sought at first only to deport European Jews but to have been thwarted in his efforts by the countries who refused to take them. Eichmann speaks with regret of the death of Peter’s sister and nephew; he professes a sort of military logic that follows inevitably on the very definition of Jews as the “enemies” of the German state (a term that appears at the beginning of the film, in a title card that offers historical-background information). He took an extraordinary interest in Jewish affairs, a classic rendering of the notion of “knowing one’s enemy.”

Far from rendering Eichmann merely mechanical, impersonal, and unaware, “Operation Finale” presents an ordinary person in the grip of passion—a passion of hatred that became the law of the land and that transformed murder into an ostensible act of patriotism. Its very subject is the fatal leap of a sick faith, race hatred, on the basis of which depravities are made possible—rationalized in the name of law, legitimized in the name of justice, justified in the name of self-defense. Far from being a mental neuter, Eichmann knew what he was doing and why he was doing it; “Operation Finale” gets behind the façade of his pose of passivity at trial and reveals the all-too-human energies of ordinary monstrosity that, then as now, motivate and rationalize official acts of cruelty.