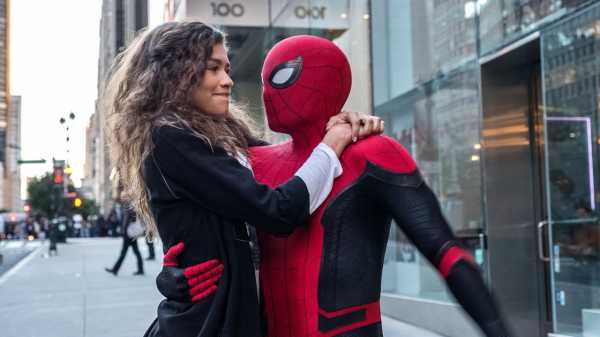 “Spider-Man: Far from Home,” starring Tom Holland as the Queens teen-ager Peter Parker, rapidly intertwines the big events that capped the “Avengers” cycle—Thanos’s mass obliteration of half of humanity and of half the Avengers, in “Infinity War,” and the return of those victims coupled with the (likely definitive) deaths of other heroes, in “Endgame”—with the conventional high-school life that Peter leads when he’s not Spider-Man. The incorporation of the prior movies’ plot twists into each new work in the Marvel Cinematic Universe is a formidable screenwriting challenge, and the makers of “Far from Home” meet that challenge with a graceful wit that, unfortunately, isn’t matched by much else in the movie.

Early on in “Far from Home,” there’s a clip from a memorial video tribute to Tony Stark, Black Widow, and others among “Endgame” ’s departed, which is being shown as part of a benefit event for victims of “the Blip”—the catastrophic event, shown in “Infinity War,” that wiped out half the world’s population. Now, five years later, the victims of the Blip have all come back, with results that are somewhat comedic: when those who “blipped out” returned, they nonetheless remained exactly the same age as at the time they left. That’s why one of Peter’s friends, Flash Thompson (Tony Revolori), a Blipee, complains that his little brother (who didn’t blip) is now his older brother. (Imagine if Steven Soderbergh had the chance to direct a Marvel movie, and the world-building feast of civic fantasy that he might have made of the comedies, melodramas, and perhaps even tragedies resulting from the sudden return of Blip victims.)

Unfortunately, the director of “Far from Home,” Jon Watts, and the film’s screenwriters, Chris McKenna and Erik Sommers, stick only briefly with the dislocation caused by the Blip before quickly leveraging it into far more conventional heroics and a far simpler dramatic dilemma. The victims’ benefit is a public event featuring May Parker (Marisa Tomei), Peter’s aunt and guardian, as m.c.; it also features Spider-Man, the local hero of Queens, who’s there to sign autographs—and who, of course, remains silent, to avoid being identified with the sixteen-year-old Peter. That secrecy is carried over from the previous Spider-Man movie, “Homecoming,” which hinted at a future romance between Peter and his classmate M.J. (played in both movies by Zendaya), and suggested the complications inherent in keeping his superheroic identity hidden from her. (Only his best friend, Ned, played by Jacob Batalon, is aware of Peter’s double life.) Peter’s romantic dreams—and their conflict with his Avenging responsibilities—are the dramatic mainspring of “Far from Home.”

From the start of the film, strange things are happening—the small Mexican town of Ixtenco has been reduced to ruins by what residents call a cyclone with a face. Other towns elsewhere have been similarly ravaged by crude colossi, and Nick Fury (Samuel L. Jackson) has shown up and taken note. He dispatches the late Tony Stark’s friend and factotum, Happy Hogan (Jon Favreau), to go backstage at the benefit and let Peter know that his Spider services will be required. But Peter has other plans: the school year is nearing its end, and he and a handful of classmates—including M.J. and Ned—are heading to Europe, under teachers’ supervision, for a so-called science trip, where Peter plans to ingratiate himself with M.J. and bump their relationship out of the friend zone.

The first stop is Venice, where the cyclone-like monster makes another appearance—a huge humanoid made of churning water that threatens the city’s architectural treasures, its population, and Peter’s friends. Peter’s Spider-Man suit is up in his hotel room and he can’t get to it in time—but another superhero, Quentin Beck (Jake Gyllenhaal), a greenish man with a green globe head and a trail of green smoke, makes an appearance and fends off the monster, earning himself, from his appearance on local news, the quasi-Italian moniker of Mysterio.

Then Nick Fury arrives and cajoles Peter into sacrificing the trip in order to save the world—and guilts Peter, too, with the delivery of a gift and a legacy: Tony Stark’s distinctive sunglasses, which the dying hero had expressly willed to Peter. But those glasses turn out to be something more: the command center of Tony’s interactive system of surveillance and weaponry, called Edith—an acronym for “Even dead, I’m the hero.” Nick gets Peter into a meeting with Mysterio, who explains the danger they face: the monster is one of the four so-called Elementals—of earth, air, fire, and water. The fire monster is about to lay waste to Prague, where Peter and Beck must go in order to stop it and thwart its plans to destroy the world.

But—avoiding spoilers—another villain appears, and his weapon of choice is distinctively cinematic: he commands a device called Illusion-Tech, by means of which he produces three-dimensional images and sounds of an extraordinary realism that occupy vast city spaces and persuade both the general public and the Avengers of their menace. In effect, this dastardly illusionist is a maker of persuasive computer-graphic action scenes akin to those that Marvel movies are based on, and these effects serve two purposes for their master villain. First, they delude Peter, Nick, and any other superheroes in the vicinity into combatting chimeras and rendering themselves vulnerable to the villain’s actual, physical weaponry. Second, they do exactly what the movies themselves do: they create illusions that are taken for realities, which are reported on by the media as authentic news, and which, in the process, allow the villain to craft a public image to his own advantage.

The villain in “Far from Home” is a malevolent director who takes advantage of what he considers the general gullibility of the public. He’s a manipulative cynic who declares, “It’s easy to fool people when they’re already fooling themselves”; he asserts that “people believe, and nowadays they’ll believe anything”; he boasts, “They’ll see what I want them to see,” and he explains that he created his illusions “to give the world something to believe in,” adding—with his own arrogant self-delusion—that his trickery “is the truth.” What Peter has to do, in order to save himself, his friends, and the world, is—as he puts it—“to get on the inside of the illusion,” to penetrate it to find and defeat the villain who’s creating it.

“Far from Home” is a work of crude and trendy distinctions between material realities and fabricated media images. Made as if in response to the prevalence of fake news and insidious propaganda, the movie relies on a sort of informational virtue signalling that vaunts its own cynical self-promotion: the idea that Marvel’s own audiovisual illusions, unlike those made by the villain, come clearly labelled as fantasies and aren’t meant to override the ability of viewers to distinguish them from reality. This false modesty conceals the colossal success of the Marvel series in the pretense that an image, however fabricated or illusory, doesn’t itself constitute a reality for some subset of its viewers. (The details of this very movie, after all, are more widely reported and discussed than those of any recent documentary.) Lest the Marvel moguls doubt the reality of their own illusions, they should imagine the outcry that would result from their repudiation of the details of previous Marvel movies or of the canonical characters.

Rather, “Far from Home” follows the dictates of the series with a solemn and pharisaical rigidity, pursuing the didactic simplicity of its bland heroics with little other than a few snappy comebacks to distract from the lockstep drama. In the process, the movie doesn’t bother to establish its own ground rules of reality or truth. There are not any clear premises for the fighting, nor any sense of what may prove lethal or disabling. Peter takes part in plenty of rock-’em-sock-’em action scenes, in the course of which he takes crashing falls that would mean broken bones and ruptured organs for mere mortals. Though, beneath his suit, he, too, is a vulnerable human, whose vulnerability always takes second place to a bit of jokey imagery, as when he is hit by a speeding train and, though knocked out, awakens mildly bruised in a small-town jail cell in the Netherlands, taken there, as if to a drunk tank, instead of to a hospital bed. There’s no sense of physical danger to the movie’s characters—and yet, appallingly, the mighty scenes of grand-scale urban destruction, in such places as Venice, Prague, and London, imply a gory trail of bodies that the movie doesn’t dare to deliver or even hint at. Its stakes remain theoretical; its superheroic violence remains fun.

The ostensible virtuousness of the computer-generated fantasies of “Spider-Man: Far from Home” is foregrounded in the mild earnestness with which it views high-school life and teen-age characters. As malevolent illusions go, the movie’s sanitized emptying-out of childhood and adolescence is of a piece with a general infantilization of imagination through the rigid and narrow superspectacles that superhero movies have become. There’s one sharp moment of comedic flair, when the jealous Peter tells Edith to launch a drone strike against a muscled and debonair classmate named Brad (Remy Hii), who’s also courting M.J., but it’s the only time when any semblance of loose emotion breaks through, and it’s quickly suppressed.

The cast of actors offers a welcome ethnic diversity that, however, is no better developed than that of erstwhile Benetton ads; the movie’s characters have little life beyond what advances the action, little personality beyond the traits that lead to the few and simple strands of the sentimental happy ending. Beside the superheroic overlay, the movie’s depth of characterization and imaginative amplitude of social relations (as well as its placing of American characters in European settings) could have been borrowed straight from the Disney playbook of decades past—in particular, from “The Lizzie McGuire Movie,” which got more fun out of its European settings and reflected the authentic modesty of its goofy and self-deprecatingly adolescent humor.

As for the all-important July 4th-tentpole-movie action scenes—the ostensible C.G.I. highlights—they could have used the help of a diabolical illusionist, because the benevolent ones, who made the film, created fight scenes of a fungible churning, without much visual wit, texture, or compositional thought. As for the evil illusions themselves, they’re in accordance with the entire movie’s cinema-by-numbers approach. I’m reminded of Norman Mailer’s remark that the only characters that novelists cannot create are novelists better than themselves.

Read this Trump interview answer and tell me if you can...