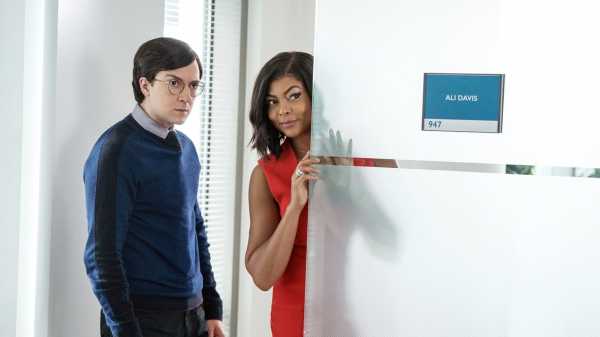 A sports agent dealing with the No. 1 draft pick in the N.B.A. while confronting pressure from the head of the agency; a parent who micromanages a college basketball star’s career; back-room negotiations that involve the athlete jumping ship and playing elsewhere; a skilled and devoted assistant who’s impatient to get out from under assistantship; an elderly man who’s both a saint of the sporting world and an oracle of wisdom; even a cameo by the Minnesota Timberwolves star Karl-Anthony Towns. It’s serendipitously odd that two movies, released on the same day—Steven Soderbergh’s “High Flying Bird,” written by Tarell Alvin McCraney, and “What Men Want,” a comedy directed by Adam Shankman and based loosely on Nancy Meyers’s movie “What Women Want,” from 2000—should overlap in so many ways. But, while “High Flying Bird” dramatizes the behind-the-scenes grip of white businessmen on the livelihoods of black athletes, “What Men Want” considers the struggle of a black woman making her way in that white-male-dominated world.

“What Men Want,” written by Tina Gordon Chism and the duo of Peter Huyck and Alex Gregory, from a story by Gordon Chism and Jas Waters, stars Taraji P. Henson as the sports agent in question, Ali Davis. She works for an Atlanta firm called Summit Worldwide Management (S.W.M.—straight white male), where, for her many successful deals, she expects to be named a partner. But the promotion doesn’t come (it goes to another of the firm’s white men); the boss, Nick (Brian Bosworth), explains that she hasn’t landed a major male client from a major sport, and, in a spirit of fierce, ruthless determination, she sets out to sign Jamal Barry (Shane Paul McGhie), the prospective top pick in the N.B.A.

Meanwhile, Ali’s personal life isn’t much more rewarding; she’s single, which is a matter of some concern to her nerdy assistant, Brandon (Josh Brener), a gay man who tries to help her in the dating department. She’s also not devoting much time or attention to her three best friends (Phoebe Robinson, Wendi McLendon-Covey, and Tamala Jones), and Brandon is pushing her to be a little more sociable. At a bachelorette party that she attends, somewhat grudgingly, a psychic with a psychopharmaceutical sideline gives her a potion that reveals its powers when Ali bumps her head, is knocked out, and awakens in a hospital bed with the ability—in fact, the irresistible propensity—to read men’s minds (starting with an emergency-room doctor who’s musing about his substance-abuse issues).

The movie advances, lurchingly, toward Ali’s recognition that this power may prove useful at work. Yet the involuntary transparency of the men around her leads her to weave an ever-widening web of deceptions. One involves the new man in her life, a bartender named Will (Aldis Hodge), and his young son, Ben (Auston Moore), which throws her personal life out of whack along with her professional one. It’s no surprise that honesty proves to be the best policy and sincerity the best judge; there’s little philosophical heft to the story and little originality to its messaging.

And yet it’s also a movie that confidently embraces its own power to reach earnest, homespun truths through, above all, the authentic dedication of its actors to the warm spirit of the comedy. Henson brings strength, radiance, precision, and presence to the gags and playful situations and to the drama, however mild it is; she lends the movie’s artifices a surprising illusion of substance. And she’s not acting in a void: the casting directors (a team of four) have assembled a group of distinctive supporting performers whose energies add sparks. Hodge’s calm and steadfast sincerity is modestly affecting. Tracy Morgan is exuberantly, impulsively comedic as Jamal’s father, Joe Dolla. A historic actor, Richard Roundtree—the star of “Shaft,” from 1971—is both mighty and under-deployed as Ali’s worldly-wise and deeply devoted father, Skip. Pete Davidson has a brief role, as the office’s impulsive yet inhibited doughnut geek. And Erykah Badu leaps out of the story’s confines, bringing free-spirited spontaneity and deep-rooted wit to her gleefully sly incarnation of the psychic.

“What Men Want” is the closest thing I’ve seen lately to a retro comedy, one that, though set in the present day, could as easily belong to the world of twenty years ago, not in its sociological details but in its tone and mood. It’s a cinematic throwback to the not-necessarily-happy days of Hollywood’s dominion, a high-concept studio film made with all the psychological shorthand and dramatic shortcuts of popular movies. It’s a story in which no professional achievement or goal comes without its life lessons, and no public activity is unmoored from the pursuit of romance and friendship. Where “High Flying Bird” is both confrontational and elusive, intensely physical and analytically abstract, “What Men Want” is plainly foregrounded and simplistically flattened. And where Soderbergh proceeds like a devoted history teacher, doing the research, showing the work, relying on authorities whose life experience is integral to the movie’s very story, Shankman doesn’t look to history at all; his is a present-tense story in which personal conflicts find their resolutions in the light of personal growth. This absence of history goes hand in hand with its consensus amiability.

For all its simplistic heartiness, “What Men Want” has one big idea, which comes late and is casually tossed off: What burdens and obligations come with learning hidden truths? There’s a passing line about power and responsibility that winks at “Spider-Man,” and there’s a scene—big, rowdy, and strange—peripheral to the central drama in which Ali is seized with a truth-telling urge. The question of hidden truths is found in Plato’s Republic, in the tale of the ring of Gyges, which makes its wearers invisible and thus allows them to go anywhere without fear of detection or consequences. This is the classical correlate to virtually any story of ordinary people suddenly endowed with superpowers—all the more so here, as a myth of secrets secretly revealed. Yet, at a time when the revelation of long-suppressed truths is a crucial political matter, “What Men Want” merely elbows the theme while rushing by.

There are primaries in 5 states today. Here’s what time the...