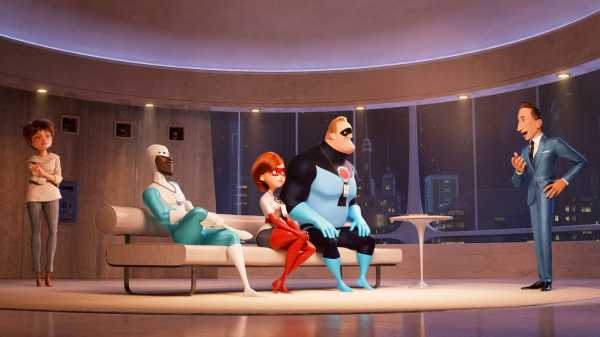 The very premise of Brad Bird’s 2004 Pixar film, “The Incredibles,” pits “a world of born” against “a world of made,” and comes down strongly in favor of the former. The villain of the story is Buddy Pine, a.k.a. Syndrome, a warped genius who creates a device that can rival the powers of superheroes, especially those of Mr. Incredible, a.k.a. Bob Parr. Mr. Incredible and the other members of his superhero family have been hiding in plain sight, posing as everyday people, because superheroism, owing to some unfortunate misunderstandings, is banned. But the movie’s vision of human nature vying against technology—realized with some of the world’s most sophisticated audiovisual technology—comes across as disingenuous. The movie isn’t actually anti-technology; it’s anti-technologist, and it contrasts the moral purity of active fighters like the Incredibles with the dubious motives of inventors, who should, in the movie’s view, be content to stay in the background and merely devise stuff to help the natural rulers, the superheroes, because, unlike superheroism, technology is morally neutral, ready to be applied indifferently for good or evil.

Bird’s new film, “Incredibles 2,” raises the ante on that premise, by making the quest for law-influencing publicity the center of the plot. (To make sense of how it does this, some spoiler-y references are inevitable.) Like “The Incredibles,” the new film presents the Incredible family chafing under the ostensibly democratic order that prevents them from taking the law into their own hands whenever they perceive a threat that their talents could thwart. Early in “Incredibles 2,” the sympathetic official Rick Dicker (voiced by Jonathan Banks), who’s in charge of superhero relocation, commiserates with Mr. Incredible (Craig T. Nelson): “Politicians don’t understand people who do good just because it’s right.” (Later on, a voice-over clip of a news report declares that “people have more trust in monkeys throwing darts than in Congress.”)

But soon the Incredible couple—Bob and Elastigirl, a.k.a. Helen Parr (Holly Hunter)—and their friend Frozone, a.k.a. Lucius Best (Samuel L. Jackson), are summoned by a well-placed supporter: Winston Deavor (Bob Odenkirk). Win Deavor—rhymes with “endeavor”— and his sister Evelyn (Catherine Keener) run a major company called Devtech, and he brings Mr. Incredible, Elastigirl, and Frozone together to announce a new initiative. Win plans to use his resources to launch a major publicity campaign that will showcase superheroes in the most positive light, that will show them doing good and saving the day, and that will result in an outpouring of popular acclaim and government action to lift the ban on them. (To do so, he’ll put Elastigirl front and center in a big-city crime-fighting campaign; Mr. Incredible will become a full-time stay-at-home dad.)

Then, at Devtech’s headquarters, something astonishing happens. Win—a bouncy and chirpy superhero supporter who’s quick with slogans, jingles, happy dances, and high-fives—recounts the solemn story of his father’s devotion to superheroes. It’s a crime story, sketched in flashback: during a home invasion, his father tried to contact two superheroes whom he had on hotlines, but they were under a ban, so they couldn’t answer; the criminals saw him calling for help and killed him. At that moment, Evelyn, who has been something of a silent partner, chimes in under her breath, muttering bitterly that, if their father had simply taken their mother quickly off to their safe room without waiting for superheroes, he likely would have survived the ordeal.

This quick exchange seemed to hint that Win’s devotion to superheroes is dubious, and that he’s cruising for a disillusionment and a lesson—that Evelyn is right about the attachment to and dependence on superheroes being misguided and delusional. But (spoiler alert) it turns out to be extraordinarily predictive in a less obvious way. The movie’s critical conflict does indeed pit Win against Evelyn, though this becomes clear only later. Win is the advocate, the salesman, the persuader who markets the company’s technology—but Evelyn is its scientist, its ingenious inventor, its creative mastermind, and, as in “The Incredibles,” she employs her powers for evil, not to aid Winston in his plan to rehabilitate superheroes (or “supers,” as they’re called throughout the film) but to besmirch their name so grievously that they’ll be banned worldwide and forever.

The device by which Evelyn does so is no mere mechanical monster of physical devastation, as in “The Incredibles.” Rather, it’s a scheme of mind control that’s rooted in a fiction: in the guise of an alter ego called the Screenslaver, she takes over any screen of her choosing (the movie’s set in the pre-personal-computer mid-sixties, so those screens are mainly televisions) and pumps them with her own macabre, anti-superhero messages, along with hypnosis-inducing images that enable her mind-control plans.

What are Evelyn’s gripes about superheroes? They’re part of a larger rant against a society that chooses “ease over quality,” and that is rendered passive by the fusion of entertainment and technology. She criticizes Americans for choosing easy dependence upon superheroes over firsthand action and experience, and she assimilates that dependence to other sorts of entertainment-induced passivity: “You don’t talk, you watch talk shows; you don’t play games, you watch game shows.” Likening the practical, fear-motivated craving for rescue by superheroes to the realm of entertainment, she relies on a new device (glasses with embedded screens) to take over the minds of civilians and superheroes alike and to wreak havoc that, needless to say, the Incredibles must prevent.

What’s clear is that Bird himself doesn’t share Evelyn’s resistance to screens or her ideology of personal initiative and firsthand action. The subject of the film isn’t in the question of screens or none—it’s in the question of what’s on those screens. Evelyn uses them for anti-superhero propaganda and hypnotic mind-control tactics. Win, however, a master salesman (whose gift for publicity Evelyn acknowledges and admires) is no less of a large-scale media manipulator than Evelyn is; the difference is that what he plans to put on the screen—his campaign to cast superheroes in a positive light—is something very much like “Incredibles 2.” It’s a convenient figure of speech to call a movie a feature-length advertisement for itself; with “Incredibles 2,” it’s literally so.

Yet what’s chilling about “Incredibles 2” isn’t its smug self-promotion; it’s the superhero essentialism—the vision of born leaders with an unimpeachable moral compass to whom all right-thinking people should swear allegiance and invest confidence—that Bird proclaims through his ever more impressive C.G.I. craft. With Bird’s films as, so often, with Pixar over all, the medium really is the message: the power of total aesthetic control is also the power of total doctrinal control.

The only free and spontaneous exhilarations that “Incredibles 2” offers arises in a comedic (and dramatically significant) plot point. The Incredibles’ two older children, Violet (Sarah Vowell) and Dash (Huck Milner), were already seen, in the earlier film, to have superheroic powers of their own, unlike their infant brother Jack-Jack. But now, in a haphazard encounter with a raccoon, Jack-Jack (Eli Fucile), too, discovers his own superpowers, and they’re the spark for Bird’s impulsive energies; at first, the sublime discovery of the baby’s superpowers—the sheer astonishment of having them, of being able to fly, to combust, to move or laser-optically ignite objects at a distance, to transform one’s appearance, to grow, to multiply oneself into a cloned horde—comes off as the only real fun that Bird himself seems to be having. The momentary detachment, in a baby’s uninhibited outbursts, of superheroism from morality provides a hint of Bird’s cinematic unconscious—the momentary liberation from the doctrinaire duties to which he has assigned himself.

That doctrine is the creation of a super-caste of superheroes, relying above all on the confidence of fellow-superheroes in the family, fellow superhero friends, and the extended clan of superheroes. It’s a doctrine that contrasts drastically with other superhero movies. For instance, many Marvel films, even some of the mediocre ones, are more politically sophisticated than the Incredibles diptych, because of their rueful look at collateral damage, at their superheroes’ flaws and failures, their differences of opinion, intention, and strategy; the relations between superheroes and society at large are far more complex and uncertain. The greatness of “Black Panther” is in more than its world-building—it’s in regime-building, a substantial and complex depiction of Wakandan politics and its connection to superheroism over all. “Incredibles 2” invokes a political world in nonpolitical ways; it’s a vision of apolitical, quasi-unanimously acclaimed virtues that are assured by the supreme powers of innate and doubt-free strongmen and strongwomen who intervene only in emergencies. It’s a nostalgic vision of total power of a local minimum that echoes sickeningly with the nostalgic pathologies of the current day, nowhere more than in Win’s enthusiastic declaration of his plan to “make superheroes legal again.” In such moments, “Incredibles 2” stakes an unintended claim to being the most terrifying movie of the season.

Pep Guardiola rules out managing into his 70s like Roy Hodgson

England beat India to win the series: All you need to...