Home Culture Review: The Mild Horror of “Scary Stories to Tell in the Dark”... 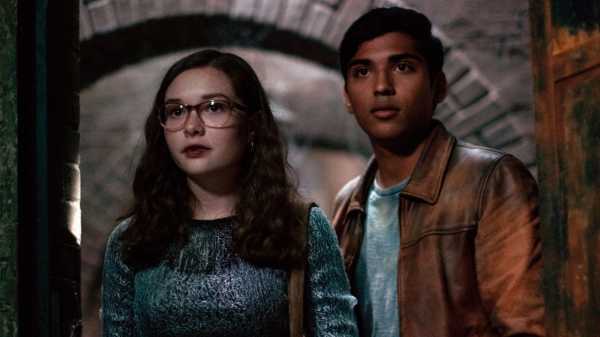 The mainspring of “Scary Stories to Tell in the Dark,” an adaptation of the three-book series (published between 1981 and 1991) of classic macabre and gory tales gleefully retold by Alvin Schwartz, is, oddly, nearly the same as the one that rebooted “Ghostbusters,” in 2016: the ghost of a cruelly abused woman, locked up in the walls of a Gilded Age mansion, lashes out at the world in revenge. It takes both movies a few warmup scenes to establish their high concept—the reality of the supernatural—and both movies rely on the private sufferings of the ghosts to reveal unredressed historical crimes. “Ghostbusters” was more effective and more interesting as a work of political platforming than as a movie, and “Scary Stories” fervently takes part in the same campaign—by means of a well-developed and engaging dramatic framework that nonetheless overwhelms the horror tales it’s meant to showcase.

The time frame of “Scary Stories” cleverly straddles Halloween and Election Day in 1968, which brought Richard Nixon into the White House—in other words, it’s posed between monsters of fiction and monsters of fact, and it balances the terrors of the supernatural against the ambient ones of the Vietnam War. The movie is set in the fictitious town of Mill Valley, Pennsylvania, where an imaginative, literary-minded, and socially isolated high-school student, Stella (Zoe Colletti), and her similarly awkward friends Auggie (Gabriel Rush) and Chuck (Austin Zajur), don their geeky costumes and head out as if trick-or-treating. The trio, knowing that they’ll have their bags of candy stolen by Tommy (Austin Abrams), a school bully, plan a smelly surprise and a messy counterattack that works like a charm, until the big brute and his friends—including, to Chuck’s surprise, his older sister, Ruth (Natalie Ganzhorn), a stereotypically popular blond girl—chase them menacingly. The three friends escape by slipping into a car at the drive-in (showing “Night of the Living Dead”), where a young man from out of town, Ramón (Michael Garza), is taking refuge from the police. He is instantly suspect, in Mill Valley, because he’s Hispanic, and he’s lying low because he’s evading the draft.

The three friends lead Ramón into an eerie local adventure to a dreaded place: the town’s haunted house, the former mansion of the Bellows family (the long-vanished founders of the mill that gave the town its name). Legend has it that the ghost of the family’s daughter, Sarah, is locked inside; lures children to the house, by means of the scary stories that she tells through the walls; and then kills them. In the course of their exploration, Stella gets a hallucinatory glimpse of the ancient ghoul and finds a volume of her stories, which, in the movie’s finest inspiration, contains blank pages on which fables begin to write themselves, as if by an unseen hand, in blood-red writing. These tales, it’s soon discovered, are designed to catch the teen-agers of Mill Valley, one at a time, in Sarah’s deadly designs.

The handful of stories in question, attributed to Sarah, are taken from Schwartz’s books, but they differ from the originals in significant ways. The first, “Harold,” about a scarecrow that’s brutalized by Tommy, the bully, and takes its revenge, sets up both a moral riddle that runs throughout the film—the dangerous emotional satisfaction of seeing a villain get a definitive and gory comeuppance—and another plot twist, involving authorities who have no truck with the supernatural and suspect a member of Stella’s circle of murder. As the action continues, Stella, who is the bearer of Sarah’s book and so, unexpectedly and suddenly, becomes her sort-of spiritual heir, observes the stories written in blood come to life and consume those around her—and, as a result, looks desperately for a way to put a stop to Sarah’s new compositions. These creepy anecdotes come into the book with the titles from Schwartz’s series, offering delightful shivers of fan service for their readers (the volumes were among my own children’s enthusiasms a decade and more ago) and also eager anticipation of how the stories will be reconfigured to fit the specifics of the Mill Valley setting and its characters.

The answer is that the narrative design largely gets in the way of the limbic disturbances of the originals. In the books, Schwartz’s matter-of-fact, unadorned, often whimsically inconclusive narration of ghastly turns of event is balanced by the harrowing, hallucinatory illustrations by Stephen Gammell. The movie’s director, André Øvredal, takes a conspicuous pleasure in the slightly heightened lyrical reconstruction of a narrow and clichéd but myth-steeped sliver of American adolescence, but evokes far less of it in the explicitly horror-centric sequences. In shoehorning the movie’s own characters, plots, and themes into them, he sacrifices cinematic style. There are some briefly jolting moments (a famous faceful of spiders, a pale being that engulfs one character in her amorphous stomach, a chopped-up corpse that reassembles itself and skitters to attack) and one particular set—the basement of a mental institution—that delivers chills. But Øvredal’s sense of horror is neither notably stark nor significantly ornamental; it’s nearly textureless, as if it had been squeezed from a tube. The framed tales of the macabre don’t come near the uncanny creeps of the pulpy originals.

The movie is dominated by its dramatic framing element, the story of Stella and her friends, which cleverly, sincerely, blatantly, yet narrowly and selectively weaves political elements of the day—the hatred that Ramón endures, the election, the Vietnam War—into the framework. (There’s also a notable, if brief and undeveloped, dramatic sidebar exposing racist motives behind imputations of black magic.) The crucial maneuver of the screenplay (by the brothers Dan and Kevin Hageman) is one that, fascinatingly yet wanly and fliply, mirrors Schwartz’s own method. The books’ author didn’t invent the stories but discovered them, with a folklorist’s enthusiasm, by way of archival research. The movie’s dramatic key is also archival research—the efforts of Stella and her friends to discover the historical truth behind the legend of Sarah Bellows. Their research is dispatched in a narrative hand wave, a rapid and conventional montage of dusty volumes and microfilm, in which the ancient depredations of the Bellows clan—and their cruel, knowing, demagogic scapegoating of Sarah—come easily and instantly to the fore.

Stella’s discovery of the truth about Sarah becomes a crucial element of the plot. It offers her a pathway to put an end to Sarah’s metaphysical reign of terror, by enabling her to dispel the ghost’s rage by telling the truth about Sarah and her sufferings. The story of “Scary Stories to Tell in the Dark” is about the telling of stories. In a recurring voice-over, Stella asserts that “stories hurt, stories heal.” Schwartz’s books may long have delighted many children (as they delighted mine), but they have also been targets of political controversy—threatened with bans from libraries over the charge that they were too disturbing for children, and, specifically, that they promoted Satanism, cannibalism, and other immoralities. There’s no such danger in the movie, which offers some of the stories’ more gruesome elements but, by framing them skillfully, moralizes their fabrications by undergirding them with (fictitious) facts. There’s authentic charm to the fine-grained didacticism of the plot of “Scary Stories,” which embodies the very virtues that it promotes. In the process of displaying the redemptive power of factual knowledge, however, the movie flattens and tames the power of imagination.

Savitribai Phule: Female Social Reformer From India Who Was Way Ahead...