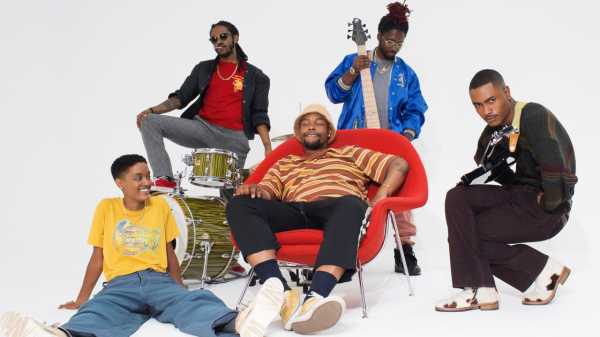 “Hive Mind,” the fourth album from the Internet, released last week, is a perfect misnomer of a title. This is not a project that feeds the mythology of a band as a single, hovering intelligence, with its members guided into automatic harmony. On “Hive Mind,” the quintet makes the individual labor of instrumentation gorgeously plain; guitar and bass and percussion are not just parachuted in but coaxed out, made to gradually surface, as they wrap around the vocals of Syd, who is lissome but not in the least bit diminutive. With the acceleration of digitized R. & B., some listeners have mourned the loss of texture, the endangerment of the sound of skin on string. The Internet, though, has figured out how to preserve the tactile headiness of the soul and funk music from which they have sprung without rubbernecking, how to fit classic interpretations into their future.

The Internet was formed, in 2011, as a de-facto branch of Odd Future, the Los Angeles collective founded in 2007. MySpace, which was making its last gasps, was a point of entry. Jenna Wortham’s excellent profile in the Times Magazine, from 2016, recounts a teen-aged Sydney Bennett, at the time about to christen herself Syd tha Kyd, encountering the page of Matt Martin, a.k.a Matt Martians, a producer with Odd Future. The two began swapping compositions, which led Syd to be recruited as a sound engineer for the collective by its firebrand principal, Tyler the Creator. On the side, Martians and Syd, the first iteration of the Internet, would jam in Bennett’s home studio in Mid-City, California, which had once been her parents’ guesthouse.

The Odd Future extended network benefitted from a certain critical myopia. There was an insistence that these prodigious kids, with their carefully scuffed Vans and their highwaters and evident mix of acidic insouciance and artistic determination, were introducing a new and outcast black mode of cultural production. Their adventures got designated “alternative”; despite his protestations, Frank Ocean, also a member of Odd Future, was made a kind of holy prophet of “alternative R. & B.” What the term signified was not the technical features of a taxon but the critical desire to tokenize, and to raise the “new wave” above the R. & B. heard on the radio, which was routinely dismissed as vulgar, anti-intellectual, overly sexed. When the Internet’s third album, “Ego Death,” was nominated for the 2016 Grammy for Best Urban Contemporary Album—a category that is, in itself, a thing of hot air—the official recognition further messed with the way we ought to listen.

T
The Internet’s output tells us that the band was never building a thesis against its forebearers; tinkerers like them are composing by recombination. Early mixtapes put out by Syd and Martians were adhering to both the chord logic of jazz and the experimentalism of funk, nearly derivatively so. “Ego Death” cast shadows of Badu, and sometimes brazenly aspired to Stevie Wonder. With its guttural bass, the track “Special Affair” could have been interpreted by Groove Theory a generation ago; there is a universe where the pulsing stupor of “Girl” could have been meted out by Tevin Campbell. Bennett told Wortham that it was the sexual powers of D’Angelo that she was summoning, in 2016, when the band performed on Jimmy Kimmel. It’s true that, when the spindly Bennett sings about courting and being rejected by women, she is by far the most convincing of this generation’s dreamboats.

The lineup of the Internet has changed as the group has grown beyond its Odd Future provenance. (The band’s name isn’t some pretentious comment on digital culture; Syd chose it as a joke.) “Hive Mind” was made by Syd and Martians plus the bassist Patrick Paige II, the drummer Christopher Smith, and the guitarist Steve Lacy, who joined when he was seventeen and has just turned twenty. Speaking of ego death, in the years between their third and fourth albums, the artists had agreed to temporarily go their separate ways, making a pact to each put out a solo project before recording again as a band. (Impressively, Lacy produced “Steve Lacy’s Demo” on his iPhone.) Claustrophobia and fatigue always threaten to infect a group dynamic, and have ended bands long before their time. But “Hive Mind” ’s fluid operation of parts suggests that each musician has brought the best ideas from his or her solo jaunts. The album arrives to my ear like a crisp exhalation, a low-key, funk-drenched appraisal of summer restlessness. It is non-hierarchical, vaguely orchestral, and, importantly, one of the couple of major releases this season that seem to be more concerned with their listeners’ pleasure than with stroking their creators’ egos.

On the track “Beat Goes On,” a feast that is worthy of its namesake, Lacy’s and Martians’s spaced-out vocals intertwine with intricately syncopated performances by Smith and Paige II, and Martians’s beeping synths. The song “stops” at around two minutes and then begins again, only its rhythmic scheme has been inverted, creating a sensation almost like reading a word backward and finding its new meaning to be pleasantly trippy. Lyrically, Syd has never been more evocative. “My crib is close, I just cleaned up / I text my bros, they wish me luck,” she says on “Mood,” encapsulating the giddy and exhausting anticipation of romance in the simplest of formulations. With a slight shift in grammar—“I know that you’re crazy, I know all your crazy”—on “Look What U Started,” she charts the entire decline of a relationship. The Internet has that sort of touch: light, wry, elusive, but probing. There are not very many acts out who are in synch enough to pull that off.

Sleeping in rooms with even a little light can increase risk...