Home Culture Review: “The Spy Who Dumped Me” Is the Best Secret-Agent Movie in... 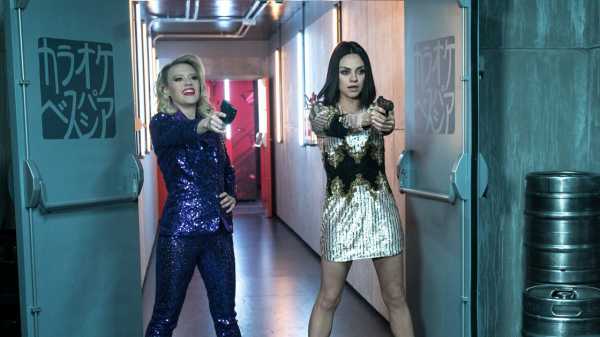 An American secret agent whose work puts him into dangerous situations breaks up with a woman he loves, because he doesn’t want her to face those dangers. That’s part of the plot of “Mission: Impossible—Fallout,” and it’s also the premise of “The Spy Who Dumped Me,” which opens tomorrow. The comedy, directed by Susanna Fogel (who wrote the script with David Iserson), begins with the spy, Drew (Justin Theroux), seemingly ambling idly through a market in Vilnius, Lithuania, when he becomes aware of a threat, against which he casually and surreptitiously arms himself with the first household doodads he can grab. Then mayhem erupts, merchants and patrons dive for cover, and Drew clobbers some assailants, dodges others, gets caught in a major shoot-out, and dashes away to a large, grim building for a moment of safety—to re-arm, to prepare for the next round with his pursuers, and to break up by cell phone with his girlfriend, Audrey (Mila Kunis), who lives in Los Angeles. While Drew is seen pointing a gun at the camera, Audrey is introduced doing the same thing—a blue plastic toy gun that’s part of a video game that she’s playing at a bar where she and a group of friends are celebrating her birthday.

The scene is mere setup; it provides the impetus for the story, which is Audrey’s ensnarement, along with her best friend, Morgan (Kate McKinnon), in the very danger that Drew tried to spare her. But, for all its plain functionality, the sequence is staged and filmed with a brisk, spare, nearly choreographic vigor that distinguishes it from violent scenes created with the approximate and merely illustrative direction that marks, or mars, many movies (including “Mission: Impossible—Fallout”). Though what happens next is the core of “The Spy Who Dumped Me,” the opening sequence sets a tone that remains consistent—and consistently clever and inventive—through most of the effervescent action.

Audrey, a marketing associate, and Morgan, an aspiring actress, are roommates; Audrey has the more conservative personal life—her relationship with Drew, she thought, was stable. The flighty Morgan is, stereotypically, more of a hedonist, bringing home from a bar a lunkheaded Ukrainian man (and the next morning, while he’s still in the apartment, she makes a phone call: “Mom, did you get the dick pics I sent you?”). That very morning, the seemingly vanished Drew drops in, literally; there’s another grand, hysterically rapid rumpus, in the course of which Audrey learns that Drew is a C.I.A. agent, that he’s in mortal danger, and that the fate of the free world depends upon delivering a childhood trophy of his to a contact in Vienna.

In Vienna, we get a pair of cognate comedic action scenes that provide a cinematic high from which the movie only gradually comes down. In a huge café, where Audrey meets the designated contact, another attack erupts, one that features both wildly antic touches (think of fondue) and a furious shoot-out that—unlike many movie scenes of gunfire—is, for all its comedy and chaos, both clearly patterned and marked by elements of real fear, including sounds of gunshots that are individual, sharp, and terrifying. The scene, despite its frenetic exaggeration and gleeful stylization, suggests with an unemphatic but unmistakable clarity the experience of Audrey and Morgan, who are experiencing live fire for the first time in their lives.

The two women escape with the help of a coöperative black-car driver named Lukas (the popular young French actor Kev Adams) who, when they let him know that villains are in hot pursuit, is all too eager to take on the challenge of the getaway, which turns both comedically grotesque and thrillingly imaginative and is capped with a tossed-off riff by McKinnon that gives the scene the giddy spin of a propeller on a beanie. These two action scenes, coming in quick succession, are—moment for moment, shot for shot, beat for beat—better than the cognate action scenes in “Mission: Impossible—Fallout.” Each of Fogel’s images distills the stakes and the efforts more snappily; the physical details are more surprising; the mood and thrust of the battles and chases are more varied, and the variety is delivered more abruptly; the actors seem more present. Above all, Fogel’s own commitment to these scenes, her sense of enthusiasm rather than just engineering, of delight rather than ostentation, distinguishes them from those of “Fallout”; although the context is utterly unrealistic and intentionally absurd, they nonetheless capture a sense of experience, from behind the camera, that the bigger and more spectacular film never achieves.

The setup and the plot of “The Spy Who Dumped Me” are familiar, but Fogel and Iserson fill them out with piquantly loopy, extravagant, and off-kilter details, which Fogel, seemingly with a comedic poker face, sets smoothly into motion with a perceptive and discerning clarity. Audrey and Morgan find their fate entangled with another pair of operatives, the suave Sebastian (Sam Heughan) and the nerdy Duffer (Hasan Minhaj), and they have to thread their way through a series of simple but deft twists involving deceptive identities. Morgan’s parents, Arnie (Paul Reiser) and Carol (Jane Curtin), from Freehold, New Jersey (Isenson’s home town), show up, as does a family friend (the majestic Fred Melamed takes part in these antics); an Edward Snowden mention that appears in the first act goes off astoundingly in the third; and some data-centric business turns out to be carnally intimate. There are touches of gory observation (a blood-spattered T-shirt worn in full public view, several inconvenient corpses, some fierce and frightening head-butting) that fluctuate uneasily between comic exaggeration and acknowledgment of the fundamental unfunniness of spy-versus-spy violence. The shambling tale of friends unto death propels Audrey and Morgan through other European venues, including Prague, Paris, and Berlin, which, dramatically, proves to be one trip too far. The script offers a tangle of loose ends to unscramble in a hurry, and the trapeze-centered set piece that provokes the dénouement—featuring a fight that the audience takes for a performance—is a better idea than it is a vision.

Despite the various concessions to narrative convention and comedic shorthand throughout the film, the tight framework meshes closely with the action while also remaining loose enough to let its lead actors—and especially McKinnon, of course—gleefully and effectively banter. Kunis’s Audrey is the earnest and practical member of the team, and McKinnon’s Morgan the loose cannon, but her impulsive improvisations save the day as often as Kunis’s thoughtful plans do. Morgan says outrageous things that she doesn’t mean but that are meant to make an effect and get attention, though she really means the meaning of them if not their hyperbolic flash. The movie places McKinnon’s comedic gift on display throughout, with bursts of verbal invention, albeit by way of brief and flashy sprints rather than in the sort of extended scenes and ampler dramatization that (in another sort of movie) her artistry awaits.

China Reveals Preliminary Cause of Its Envoy’s Death, Sends Team to...

What to Stream This Weekend: Five Films That Were Runners-Up for...

One Killed, Two More Wounded in Shooting in Chicago