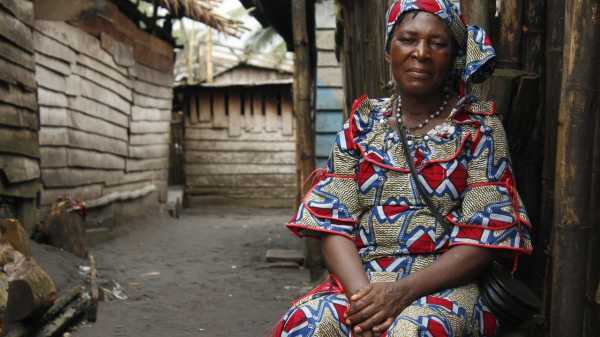 From the first shot of Rosine Mbakam’s first feature, “The Two Faces of a Bamiléké Woman” (2016)—a view of a long, dark road through a car windshield, as the director, in voice-over, discusses her lifelong bond to that darkness—it’s apparent that she’s an original filmmaker of exquisite sensibility. The film’s premise is a classic one of personal documentary, the return home: Mbakam, born in Cameroon, living in Belgium, returns to her home country, after a seven-year absence, in the company of her husband and their young son, Malick, and she films her reunion with her mother and aunts, questioning them about their lives, experiences, and memories. She delves deep into family history and intimate experience and opens it out into a wide web of societal connections and political implications. “The Two Faces of a Bamiléké Woman,” together with her second feature, “Chez Jolie Coiffure” (2018), which are both opening at the Anthology Film Archives today, for a weeklong run, reveal Mbakam to be one of the foremost filmmakers of creative nonfiction working right now.

Mbakam’s compositional sense—her cinematic thought in action—is revealed throughout the rest of the film, and informs all of her work. In the second shot, the director shows her mother seated outside the family home and preparing food—again in an alluringly asymmetrical composition—while Mbakam asks what her mother thinks about the work that she herself does, as a filmmaker, and about the cinema itself. The filmmaker’s journey leads her first to her ancestral village of Tonga and then to the capital city of Yaoundé, where she grew up. Her observations and interviews mesh throughout with her own reflective and probing voice-overs, which both provide personal background and place her childhood experiences into a wider context.

Mbakam, who does her own cinematography, is a portraitist, a landscape artist, and an architectural scrutinizer whose sense of space is inseparable from the words and the history that fill it, as when, in Tonga, she first brings Malick to visit her father’s grave and then shows her mother, in a bare and shadowy room in the long-uninhabited family home, discussing her experience as one of the wives of a polygamous man—an experience that links up with her memories of the suffering that the family endured during Cameroon’s battles for independence from France. Appalling details from the family’s and the country’s past emerge, including the sale of women for forced marriages and the kidnapping of men for forced labor.

Mbakam is also a probing, insightful, and insistent interviewer. She asks her mother to speak about the filmmaker’s own marriage, to a white European man (who figures only at the margins of the film). In the course of their discussions, her mother addresses intimate matters of the filmmaker’s childhood—including Mbakam’s early puberty and her mother’s traditional method of dealing with it—and Mbakam’s mother’s own remarriage, to one of her late husband’s sons by another wife. (She engaged in this marriage for the purpose of ruling out any further sexual relationship.) Moreover, the filmmaker presents her mother’s life as most deeply entwined with the lives of other women—in particular, with that of her sisters, who are active and insightful participants throughout the film.

Attentive to the details of the physical labor that occupies much of the women’s time, Mbakam also evokes and observes the bonds between women—both among the sisters and in the community at large—that sustain the family both practically and emotionally. She visits a produce market where her mother works, recalling that, as a child, she learned a great deal from reading the newspapers that were used to wrap fish; in the resulting discussion of national politics, her mother offers a brilliant metaphor about the difference between a president who eats with a fork (leaving crumbs for the people below) and one who eats with a spoon (he eats everything himself). Mbakam’s mother and sisters live by a code of female independence that they passed along to Mbakam herself: one of the key institutions of the community is the tontine, a sort of women’s conclave that’s also a collective fund for mutual financial aid. The financial freedom and collective organization of women emerges as a fundamental basis for progress, whether personal, political, or, for that matter, artistic—it’s the basis for Mbakam’s own intellectual awakening.

Even at its most sharply and analytically observational, “The Two Faces of a Bamiléké Woman” echoes with lyrical insight and aesthetic inquiry, including a grand sequence in which a tontine meeting veers toward portraiture, set to a poem by Maya Angelou, and another in which Mbakam shows her mother a second movie: “Black Girl,” by Ousmane Sembène, from 1966, a landmark of African cinema which, here, emerges as a model and a springboard for the act of self-recognition and the expansion of understanding by way of filmmaking.

The intricate artistry and cinematic ambition of Mbakam find an extraordinary form in her second film, “Chez Jolie Coiffure,” a documentary that takes place entirely within a hair salon in a shopping mall in Brussels that’s run by a Cameroonian woman named Sabine and that serves as an informal meeting place for African residents of the city. Here, too, Mbakam intertwines personal and political experience, intimate life and social bonds—and here, too, Mbakam’s cinematographic sensibility is inseparable from the discussions that she elicits and the events that she records.

In “Chez Jolie Coiffure,” the professional relationships of the hairdressers—who are all women—are personal as well, and their current-day work and lives remain tied to their home countries. The through line of discussions involves the agonizing journeys that African migrants endure; Sabine discusses the virtual captivity that she endured as a migrant worker in Lebanon, the physical dangers of her escape from that bondage, the risky travel to reach Europe, the labor and the maneuvering that it took to reach Belgium and its community of African residents. The women discuss the friends and relatives who died in the course of such travels; they discuss the menace of sex slavery that confronts female migrants; and they discuss their efforts, as longtime residents of Belgium, to seek official documentation of their status.

Mbakam presents the teeming daily life of the salon in richly detailed images, made mainly with a static camera on a tripod in which the compositions make prismatic use of the shop’s mirrors and windows to unfold its workaday activity in deeply layered framings that give dramatic identity to the relationships and the transactions that echo throughout the small shop’s confines. She looks closely at business and its personal side—the cost of supplies and the prices of the salon’s services, the rate of an international cell-phone call, the price of an apartment that’s being sought for a newly arrived migrant, the cost of repatriating the body of a deceased African migrant. She also hears from Sabine and the other hairdressers about their own tontine and its central role in their professional and domestic lives. Mbakam’s images are also permeated by the life of the mall’s corridor and, in effect, by Belgian life at large—notably, the cold and condescending gazes of white passersby directed at the salon’s staff and clients. “You can tell they want to burn us all,” Sabine says, and that hatred emerges in terrifying action, in the form of a police raid to arrest undocumented residents. Within a single salon, and amid its handful of workers and customers, Mbakam discerns the fault lines of modern life, analyzes them in terms of personal experience, and displays them with an enduring and exemplary iconographic power.

Seven Years on the Margins in Rural Mississippi |

Elizabeth Warren is confronting big banks over how they intend to...