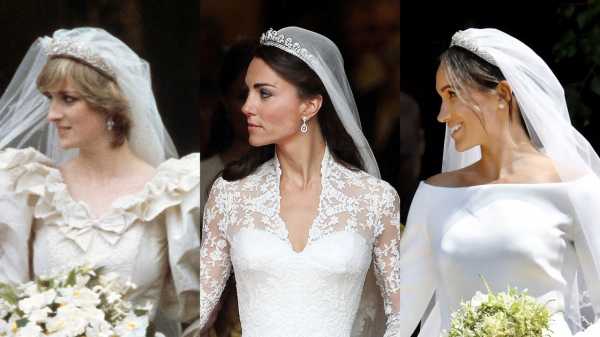 In July of 1981, an estimated seven hundred and fifty million people around the world tuned in to watch the televised wedding of Lady Diana Spencer and Prince Charles. It was called a “fairy-tale wedding,” and the ceremony looked the part: Diana arrived at St. Paul’s Cathedral in a horse-drawn carriage called the Glass Coach and walked down the aisle, amid thirty-five hundred guests, wearing an heirloom tiara and a giant confection of a dress, complete with voluminous taffeta sleeves, layers of laces and sequins and pearls, and a twenty-five-foot train, the longest one in Windsor history. Prince Charles wore his military dress uniform. The “wedding of the century” wasn’t entirely traditional, though; the royal couple caused a stir by omitting the word “obey” from their vows.

In April of 2011, when Kate Middleton and Prince William were married, at Westminster Abbey, their wedding drew comparisons to Charles and Diana’s. Prince William had proposed to Kate with the engagement ring that had been his mother’s, a twelve-carat oval sapphire surrounded by fourteen diamonds. The ceremony was smaller than Charles and Diana’s, with nineteen hundred guests at the Abbey, including celebrity friends of the couple, such as David and Victoria Beckham and Sir Elton John, but the day didn’t lack for spectacle. After the wedding, the bridal procession made its way to Buckingham Palace, where the couple stood on the balcony to watch a ceremonial military flight of several R.A.F. aircraft.

More from The New Yorker on the royal wedding.

This weekend, crowds of viewers were treated to another royal wedding, as the American actress Meghan Markle married into the House of Windsor. The pair, who met on a blind date and whose courtship included a camping trip in Botswana, put their own spin on royal wedding traditions. Markle herself breaks the mold of a British royal bride (and not just because she chose a radical lemon-and-elderflower wedding cake): she is biracial, American, and has been divorced. In the days leading up to the wedding, enthusiasm for the new royal couple has swept the U.K.

In the video above, watch highlights from each royal couple’s wedding and see how each pair has adapted the traditions of the day: the gowns, the guests, the parades through London, and, of course, the array of hats.

The Lyrid meteor shower peaks tonight. Here’s how to watch.