Home Culture Ryan Murphy’s “The Politician” Is a Funhouse-Mirror Reflection of the So-Called Meritocracy... 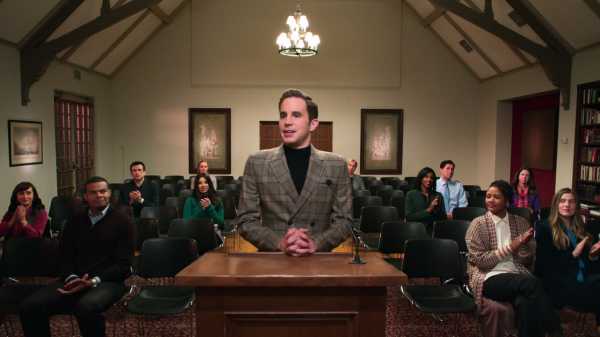 The topic of college admissions lends itself well to degenerate farce on “The Politician,” a terribly giddy examination of human desire, American hierarchies, and the baroque structures erected in support of each. The eight-episode first season of the series—which was created by Ryan Murphy, Brad Falchuk, and Ian Brennan—is the first flowering of Murphy’s three-hundred-million-dollar deal with Netflix, the biggest such contract in TV history. “The Politician” announces its intention to provoke from the jump, with a trigger warning alerting persons of sensitive mental health that some distress may follow. The plot, a soapy, dystopian fantasia about extracurricular competition among rich high-school students, delivers on the threat: there’s suicide, existential alienation, and fear and loathing in both the Friedrich Nietzsche and Hunter S. Thompson-on-the-campaign-trail senses, plus high anxiety about class and power. This is “American Horror Story: So-Called Meritocracy,” and it arrives at an opportune moment: on the heels of the college-admissions scandal, right around the PSATs.

It is a timely satire not only in its strafing of privilege but also in its funhouse-mirror reflection of the contrived façades and convoluted selves of aspirants to political power. The high-school antihero, Payton Hobart (Ben Platt), is a type-A kid and a DSM-V-type sociopath. Hopeful of securing admission to Harvard College, and thereby moving toward his long-term goal of winning the U.S. Presidency, Payton is running for the presidency of his student body. Payton seems addicted to ambition for its own sake, but he also worries, in his heart of hearts, that he has no heart—that’s he’s façade all the way to his core. Platt is amazingly elastic in depicting Payton’s struggle to maintain the series of successful gestures comprising a personality that at times seems focus-grouped. The character is, like most who dream of high office, a narcissist. But is his narcissism malignant?

In flashbacks, we see that Payton, who is perhaps sexually fluid or simply closeted, had a romance with his Mandarin-language tutor, who is now his opponent for the student-body presidency. This is River (David Corenswet), who looks like what you get if you picked up a vintage Abercrombie & Fitch catalog and ordered a J.F.K., Jr., clone. Payton and River were friends and part-time lovers, but it was doomed—the show’s outlook on human nature is often deliciously grim—from the start. (The scene depicting their first meeting offers a symmetrical shot of the pair hovering over a chessboard.) Likewise, the first episode takes extreme care to depict characters troubled by the questions of what is “fake” and what is “real” by having them repeat those labels again and again. It also allows a member of Payton’s campaign team to exclaim, during a debate, “He’s sweating like Nixon!” The show had already done a foxy job of evoking the thought, but it can’t resist returning to the passage with a highlighter. On the other hand, I guess that it can’t hurt to shout—that it clears a safe path to proper understanding—and to be firm about your points when you are trying to make a work of “Heathers”-level mercilessness in a country that cannot handle a “Heathers” remake.

Gwyneth Paltrow plays Payton’s mom with a benevolent glow; the family also includes a gerbil-like zillionaire father (Bob Balaban) and Payton’s two older brothers, a set of toxic jocks with popped collars. Imagine Bill Murray’s jackass twins from “Rushmore,” but played by Armie Hammer. “The Politician” isn’t merely cribbing Wes Anderson, here and elsewhere, with its casting, compositions, camera moves, and stylized prep environment, with fabulous costumes in tangerine and lavender and cotton-candy pink. The show proceeds as a deliberate pastiche, dense with references to movies ranging from thirties screwballs to the work of David Lynch. (Jessica Lange plays a platinum-blonde monster mom who’s like a cross between Patricia Arquette in “The Act” and Diane Ladd in “Wild at Heart.”) But the show has a special regard for Hollywood of the sixties and seventies, from the pill-popping swing of “Valley of the Dolls” to the bubblegum pop of Robert Redford in “The Candidate” and the chicken-salad sandwich from “Five Easy Pieces.” It knits these moods together to accommodate both paranoid thrills and grand pastel melodrama. The campiness and creepiness are joined by way of biting wit, such that the show reads like some kind of Hal Ashby telenovela. “The Politician” hits a tone—furiously angry, wistful beneath its bitterness—that is indebted to the disillusionment of the Nixon era, and updated to capture the disorientation of ours. The show doesn’t quite do subtlety, or subtext, but nor do these times.

Nancy Pelosi’s first big vote is today. Her next one is...

German Catholic Church Confesses it ‘Was Complicit’ in WWII by Not...