Home Culture “Sally4Ever” and “The Bisexual,” Reviewed: Women in Crisis, In and Out of... 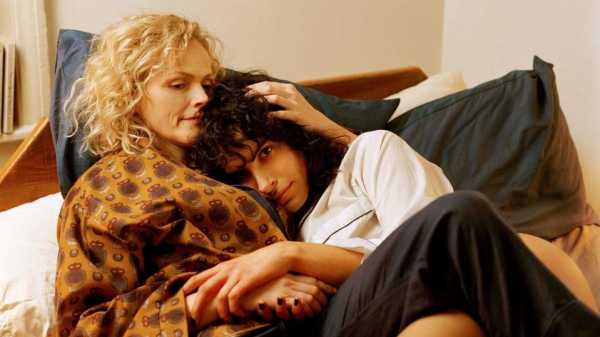 “Sally4Ever,” on HBO, is a midlife-crisis sitcom intrigued by all that oozes. Nothing human is alien to it, not suppurating psychic wounds, and especially not bodily functions. It distills human nature to its coarse extremes. In a moment of disability farce, it dumps noisome gags about bathroom stalls; the menstrual cycle is also a key concern. Sally (Catherine Shepherd) is an Englishwoman with a timid manner, a dowdy style, a soft halo of Romanticism ringing her sad haircut, and a mother who goads her toward marriage with anxious reference to her ovulatory potential. “You’ve got a limited number of eggs,” Mum scolds, wishful that Sally will settle down with her live-in boyfriend of ten years, David (Alex Macqueen).

David is introduced slathering a tacky a-cappella treatment on George Michael’s “Faith,” and his flesh is as gross as anyone’s. The camera stands petrified by his toilette: his zesty dental flossing and dorky nasal dilators, the creams he gobs on his soft feet and disappointing pate. He’s the lead grotesque in a series created by Julia Davis, the British comedian responsible for comedies of bad manners including “Hunderby” and “Camping.” Her style always accommodates filth that builds from bathroom humor and bedroom slapstick. On “Sally4Ever,” her dynamics of shock and domestic disgust amount to a kind of kitchen-sink surrealism.

One day after work, David attempts to spice up his love life with Sally by approximating a burglar’s outfit and jumping her in the front hall. After she fights him off, he removes his balaclava to mewl that he meant no harm. “I’m just fed up with you saying I’m boring and predictable and my penis is too small,” he says. Later, after dinner, David drops to one knee, whence he badgers her with a blubbered proposal: “You’re not getting any younger. You’re not gonna meet anyone else!” Sally accepts, as if for the familiar and futile purpose of stemming his loss of dignity. At bedtime, David offers Sally his mother’s wedding dress, which he cherishes despite its stains. “Mum had quite an overactive gland,” David explains.

In the night, Sally slips out to meet Emma (Davis), with whom she had flirted in a moment of enchantment on the Tube. Emma is enticingly free and bold—a vital vision in a red leather jacket, with a touch of Madonna’s desperately sought Susan Thomas in her boho brazenness. She is quickly developed as a wicked cartoon in Davis’s tradition of stiletto floozies, addled sirens, and rancid prima donnas. (On HBO’s current remake of “Camping,” Juliette Lewis plays an American analogue of a typical Davis character; named Jandice, she supports herself by working as a d.j., a Reiki healer, a cheesemonger . . . “oh, and I’m a notary.” Emma is a brat, a leech, a shameless climber, an aimless grifter, a pathological liar, a probable narcissistic sociopath, a fantasy figure of immoral self-indulgence, and a lot of fun at parties. She has no boundaries, no morals, no shame, no sense. Sally invites Emma into her life, and Emma effects a home invasion.

The series is a showcase for Davis to contrive and perform misanthropic antics as Emma barges through encounters with Sally’s stodgy parents, David’s widowed mother, and other recipients of grave offense. Shepherd, playing the nominal lead, gives a tickling performance by supporting this comedy of rudeness with facial gestures that tread a line between discombobulated reaction shots and simply breaking character. Three episodes into this seven-part season, it remains unclear what all this horrible awkwardness and explosions of bowels add up to—how much art can be found in the squicky craft of an evil clown.

“The Bisexual,” which arrives on Hulu next week, is another British-produced half-hour comedy that is focussed on a woman in crisis and that is launched into action by an agitating marriage proposal. The American filmmaker Desiree Akhavan directs herself as Leila, the younger partner in business and love of Sadie (Maxine Peake). The series opens as a reporter interviews the two women about their startup, a “Shazam for clothes.” His inquiry about their plans for children prompts Sadie to pop the question to Leila, which spurs her to question her relationship, her sexual orientation, and her whole existential situation. Where Sally’s crisis outrageously flowers into absurdity, Leila’s is the basis for a droll study of friendship and desire, with tenderness in its millennial moping, and emotional depth to its embarrassing emotional pratfalls.

Fearful of setting a concrete future for her unformed self, Leila moves out. She has never had sex with a man and becomes intent on doing so, and the show is meaningfully ambiguous about whether this pursuit constitutes a quest of self-discovery, a run of self-denial, or an errand tangential to a larger project of inquiry. At one point, Leila supposes that bisexuality is perhaps a myth “created by ad executives to sell flavored vodka,” a jest typical of “The Bisexual” ’s skeptical view of cultural tourism. (Strolling through a multiethnic market, Leila, whose parents are Iranian, looks askance at the basket of goods assembled by her new roommate, Gabe (Brian Gleeson), saying, “This market, plus your white-man Orientalist fetish, is the reason why the spice cabinet is such a fucking mess.”) When she sleeps with a man, it is in a scene that ends, in flagrante delicto, with Leila laughing to herself: “I thought sex with a man would be so different and it’s not!” The laugh that the show goes for—and earns—is a chuckle at the tension between Leila’s worldly-wise façade and her sensitive inner self.

The makers of OxyContin may have tried to hide $1 billion...

‘Be Cool Not a Fool’: Viral Videos Support Citizenship Law and...