Home Culture School Shootings and the Heroes Who Shouldn’t Be | 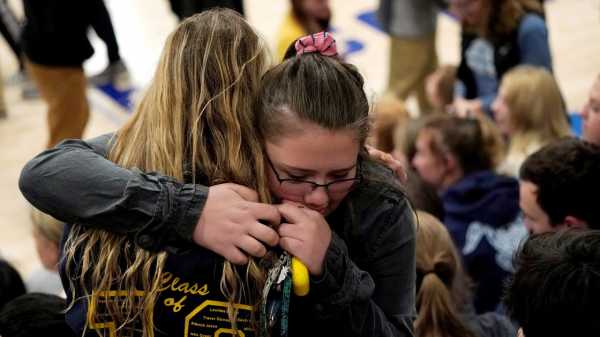 On Wednesday, CNN interviewed a young boy with rosy cheeks and squinty eyes. His name is Nate Holley, and he’s in sixth grade at STEM School Highlands Ranch, in Douglas County, Colorado. Steve Holley, Nate’s father, holds his son close as Nate methodically describes what happened the day before at school, when a pair of shooters killed one student and injured eight others. Steve’s mouth is stretched, but the expression is not a smile; he is steadying himself, it seems, more than he is steadying the child. In split screen, the reporter Brooke Baldwin sits listening in the network studio. The Holleys are framed in front of the school campus, where yellow police tape flaps in the wind. A chyron reminds us that the shooting in Highlands Ranch was, by CNN’s count, the country’s thirty-fifth since this past fall.

“It was incredibly scary during it,” Nate says, his voice a boyish upspeak. “At least half the kids in my class broke into tears when it started happening.” Gunshots hit the classroom doors—that familiar American noise. “I have sensitive ears,” Nate notes. The siren sounded. A classmate made a joke. A teacher told him to shut up, and she herded the children behind her desk, then into a closet. Nate, hiding in the corner, heard the shooter approach. “I had my hand on a metal baseball bat just in case,” he recalled, “ ’Cause I was gonna go down fighting if I was gonna go down.”

The post-shooting digest is by now its own genre of television, as reliably emotive as anything on network news. America, in its sick passion for narrative and resolution, converts each mass shooting into a story, featuring a list of stars and supporting characters. The shooters cast themselves. To salvage some order, we hungrily valorize the survivors as heroes. Baldwin, in response to Nate’s speech, gives a performance of disbelief; she throws up her hands, powerfully inarticulate. “I’m in awe of you,” she manages to say.

Physicians speak out about treating the victims of mass shootings.

A different sort of pageantry plays out for the victims who can’t appear on TV. Last week, a shooter at the University of North Carolina at Charlotte killed two students and injured four. One of those killed, Riley Howell, an R.O.T.C. cadet and former high-school soccer goalie, reportedly tackled the shooter in a classroom, disrupting the rampage, but lost his life in the process. As a reward for this sacrifice, he was buried with military honors. Kendrick Castillo, who was set to graduate from STEM three days after the shooting, reportedly lunged at one of the two gunmen, in effect giving his own life so that his classmates would survive. Reporters remind us that he, too, died a hero. His father, John Castillo, told NBC News that he had pleaded with his son not to be.

“The teens will save us,” we like to say of the children of the Parkland generation, who know these perverse rituals more intimately than any of us. Those who become casualties of the gun epidemic know that they are conscripts in a senseless infantry. On Wednesday, some STEM students walked out of a vigil in protest when they realized that Democratic politicians, not members of the student body, had been asked to speak. What might the students have said? That Nate shouldn’t know the instinct to go out fighting. That Castillo’s unfathomable actions do make him a hero, but that he shouldn’t have had to be. That the story of their tragedy will spend only a few days on the news networks but will stay with them the rest of their lives. “This was for Kendrick Castillo,” one student said later, of the vigil. “Not for our senator, not for anyone else.”