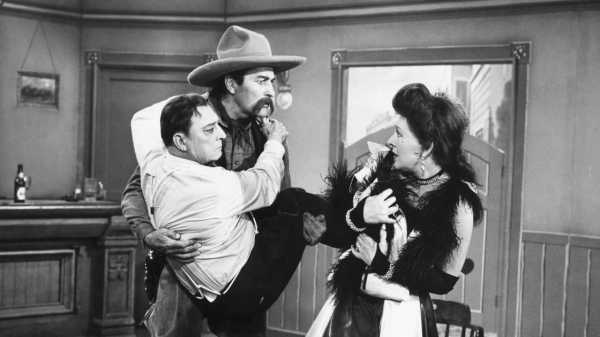 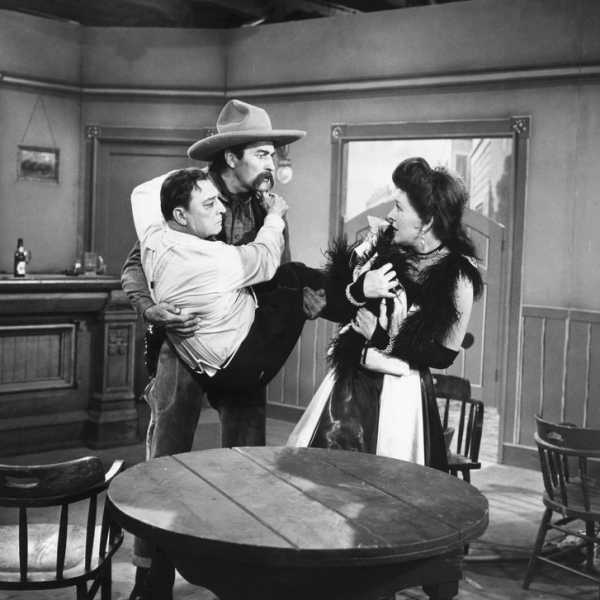 “The Silent Partner,” one of the highlights of the “Screen Directors Playhouse” series, is about a forgotten silent-comedy star, played by Buster Keaton.

I binge-watched a bunch of TV this weekend, catching up with a series that was previously issued one episode at a time and now is on home video to consume in one gulp, if so desired. “Screen Directors Playhouse,” newly available in a three-DVD set from Mill Creek, was made and broadcast in 1955 and 1956—an era that, like the present day, found the movie industry losing viewers to television. The series has a hook that served to display to home audiences the distinctive merits of movies, and should serve the same purpose today: its episodes, each running about twenty-five minutes, were all made by movie directors, who, according to a voice-over at the start of every episode, chose their own screenplays (in some cases, they wrote them). The roster includes such superb directors as John Ford, Ida Lupino, Allan Dwan, Frank Borzage, and Leo McCarey. It also features some remarkable work by filmmakers of lesser originality who nonetheless possess a knack that their chosen screenplays and casts give room to flourish.

It’s a misleading misconception that classic-era studio directors merely filled in the performances and images for preëxisting scripts that were set in stone. In fact, the best Hollywood directors were also integrally involved in the creation of their scripts, reworking them in the course of the shoot and even on the set (in part because, especially from the nineteen-forties onward, they were often also their own producers). In “Screen Directors Playhouse,” the bold artistic results of the freedom with which the notables worked is a reproach, decades in advance, to the practice of the writers’ room, to the primacy of the showrunner, and to the absurd mix-and-matching of directors that make modern TV series bureaucratic jumbles, the equivalent of novels ghostwritten for book packagers.

Ida Lupino’s film “No. 5 Checked Out” (which she also wrote) tells the story of Mary, a deaf woman (played by one of the most subtle and complex Hollywood actresses, Teresa Wright), who is alone for a few days during the off-season at a colony of cabins, in deeply wooded country, that she runs with her father. A car drives up and dispenses a heartily courteous, vigorously young-middle-aged man named Barney (William Talman), who asks for a cabin for himself and a “friend,” and, though the cabins aren’t yet open for business, she charitably lets them in. But the two men turn out to be robbers and killers looking for a hideout, and their presence at the resort puts Mary in danger—even as she seems to be falling for Barney. (Notably, the other criminal is played by the cunningly inventive Peter Lorre, who gives the devil his full measure of sleazy fascination.)

Lupino—who directed six feature films from 1949 to 1953, for her own independent production company—is, simply, one of the great filmmakers, whose stories about women’s lives are matched by a fervently expressive style, in image and performance alike. The themes and dramas of “No. 5 Checked Out” seem to be assembled from elements of her prior movies—a woman’s disability and its devastating emotional consequences (“Never Fear,” a.k.a. “The Young Lovers”), and a man with an agonizing secret (“The Bigamist”)—but with a more sharply focussed purpose. Her sixth film, “The Hitch-Hiker,” which is also a story of two male criminals on the run, is the least artistically significant of her films and the least distinctive in theme and tone—and this brief TV show serves as a virtual do-over, turning it into the classic, personal movie that it could, and should, have been.

Allan Dwan, one of Hollywood’s less heralded directorial heroes, started his filmmaking career in 1911 and was nearing the end of it, in 1956, when he made the final work in the series, “High Air.” To do so, he came up with an ingenious solution to a practical artistic challenge. His film is centered on the world of “sandhogs,” men who dug tunnels and bridge foundations beneath rivers and endured the rigors of high air pressure, facing the risk of the bends. It’s a keen cinematic subject, as seen in such films as Raoul Walsh’s “Under Pressure” (1935) and Mitchell Leisen’s “No Time for Love” (1943). In “High Air,” Dwan (who was himself trained as an engineer) blends the physical drama of dangerous labor with the emotional drama of an estranged father and son’s reunion. The father, a sandhog, is played by William Bendix, one of Hollywood’s great vulnerable hulks (as in “The Blue Dahlia,” from 1946), and the son, an aspiring engineer in the grips of emotional torment, is played by a fervent and intense actor, nearly or barely twenty, who was just launching his career: Dennis Hopper.

Dwan was one of the great action directors—he brought a virtually mathematical dynamism to violent confrontations and daring stunts—and, in “High Air,” working with a low budget and limited sets, he makes the most of the physical perils of the labor at hand. Nonetheless, the film’s most intense action and gravest danger is emotional; its melodrama suggests a much larger span of action, including flashbacks. But Dwan, with ferociously pressurized minimalism, compresses the bulk of the drama into an extended dual closeup of the glowing-hot Bendix and the inflammable Hopper, squeezed together at a disturbingly cocked angle, which lets the two great actors verbally thrash out years of stifled turmoil in one shockingly intense moment of joint confinement.

It’s no coincidence that most of the great movie acting is found in movies by the best directors—and also that great directors are frequently responsible for the discovery of stars. That’s the story of “The Silent Partner,” by George Marshall, a filmmaker of scant originality but notable sensitivity to performance (he worked with Laurel and Hardy, Lucille Ball, and Jerry Lewis, and directed “The Blue Dahlia,” which is a feast of pugnacious melodrama). Marshall was a movie veteran who started directing in 1916 and made dozens of silent films, which are the inspiration for “The Silent Partner,” about a broken connection between a famous veteran director (Joe E. Brown) and a former, now forgotten silent-comedy star whom he had discovered, played by none other than Buster Keaton. (It also features a host of high-wattage character actors, including Jack Kruschen, Jack Elam, Percy Helton, and, most notably, the former silent-era star Zasu Pitts.) Keaton gives a profoundly moving double-edged performance as a tersely melancholy has-been and, in flashbacks to the freewheeling days of slapstick silent short films, as the blank-faced, mercurially acrobatic master of uproar.

There are other treasures in the three-disk set. Another film by Dwan, “It’s Always Sunday,” is a teeming comedy about a liberal and principled minister (Dennis O’Keefe) and a grifting hobo (Sheldon Leonard), along with the huge and hurtling cast of family members, friends, neighbors, and officials who get involved in an unexpected but high-stakes tangle (like many of Dwan’s features, it parses sociological turmoil). In “Rookie of the Year,” starring John Wayne as a swaggering sportswriter, John Ford tries out the theme of “Print the legend,” which he would raise to historic proportions in “The Man Who Shot Liberty Valance.” Leo McCarey, who joins sanctified sentimentality toa spritzy sense of physical comedy, offers the whimsical romance “Tom and Jerry,” a brassily urbane yet tenderly melancholy comedy of remarriage—the story of a New York lawyer (Peter Lawford) who cheats on his wife (Nancy Gates) with a gold-digger (Marie Windsor) and gets a little unsolicited help from a concupiscent minister (Frank Fay) in repairing the damage. With a sudsy sidebar involving fatherhood and Santa Claus, as well as some erotic winks and some swift and sour notes of deeper marital discord, it plays like a nineteen-thirties screwball comedy condensed and updated for the television audience.

The rapturously romantic Frank Borzage (who started as a director in 1913) made three films for the series, all three of which, in their ways, are war films. The idiosyncratic philosophical tale “The Day I Met Caruso,” set during the First World War, stars Lotfi Mansouri as a celebrated singer and Sandy Descher as a Quaker girl who meets him during a train trip from Boston to New York—and has her principles of austerity, and perhaps her pacifism, too, shaken in the process. The Korean War drama “Day Is Done,” an anguished tale of the bond between a raw recruit and a crusty officer, is unstinting in its vision of the terror of war—and the various, often ugly responses that it provokes from those who are forced into battle. Borzage also made “A Ticket for Thaddeus,” a story of a Polish refugee (Edmond O’Brien)—and, as it turns out, a Holocaust survivor—who is left traumatized by Nazi terror, and now displays a desperate fear of law enforcement. Borzage offers a proudly democratic vision of the American way of life and of the even-handed fairness of the police and the judicial system alike, albeit one that was as idealistic then as it would be now.

Move Over Musk: Russia Working On Own, 100-Use, Environmentally Friendly Rocket