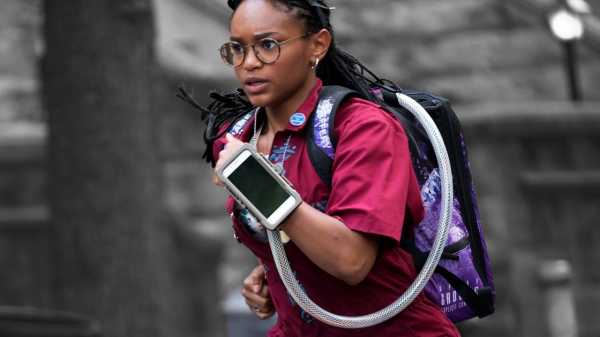 Loopholes, resurrected characters, plot resets, ever-branching arcs: time travel is an infinitely flexible conceit, limited only to its own pseudoscientific rules of causality. The new Netflix movie “See You Yesterday” makes an unusual contribution to the time-travel canon while highlighting one of its most prominent flaws: the racial privilege baked into these stories, or the dangers of time-travelling while black.

From Marty McFly to James Cole and even Wolverine, time travellers are almost always white and frequently male. It’s a practical choice on the part of writers. Post-Reconstruction? Not a problem. Colonial times? Let’s make it a three-day weekend. Time-travel shows and movies tend to fall into one of two categories: quaint personal journeys and heroic quests. In stories like “Back to the Future,” “The Time Traveler’s Wife,” and “The Butterfly Effect,” the scale is that of a personal narrative, with a white protagonist comfortably insulated from a larger racial history. On the other hand, in stories like “12 Monkeys,” “The Terminator,” and “Timecop,” the central conflict is so large—apocalypse, dystopias, national or global disasters—that the narrative can easily sweep past issues of race. (As for forward time-travelling, the future tends to be surprisingly post-racial, as evinced in “Star Trek” and “Doctor Who.”)

“See You Yesterday,” which was produced by Spike Lee, takes a different approach. Its protagonists, C.J. and Sebastian, are black teen-age geniuses who figure out the secret to time travel for a science expo at school. When C.J.’s older brother is shot dead by police, she decides to go back in time to prevent his murder. Though the movie encounters some of the usual pitfalls of time-travel plots (predictability, muddled rules) and sports some hokey, eighties-style special effects, what it offers in terms of diversity and messaging is a treasure. As C.J. and Sebastian work out the fantastical science of time travel in a garage, it feels practical, grounded in the reality of black American life. The two don’t set out to change the world or alter their own lives, nor do they jump far into the past or future for an excellent Bill and Ted–style adventure. They’re not thrilled to have one-upped Einstein; they just want to get scholarships to college so they can leave their neighborhood. And C.J. just wants her brother back. Their actions and motivations are contained to this one very real instance of police brutality, so the plot never loses its footing in the real world.

Other shows have tried to address time-travelling while black, to different degrees of success. In the painfully juvenile, short-lived Fox comedy “Making History,” a black character who travels to 1775 is mistaken for a slave, but it’s played like a one-off joke. In the NBC series “Timeless,” which ended last year, a black programmer, a white historian, and a white soldier form a team of time-hoppers pursuing a “time terrorist” who’s out to hijack history. In the first episode, the programmer, Rufus, protests, “I am black. There’s literally no place in American history that will be awesome for me.” His discomfort is always apparent. At one point, he delivers a triumphant speech about future black American leaders, including Barack Obama, to a racist cop—but all it does is incite the cop to pounce on him, creating a distraction so that his white colleague can break out of prison. In “Timeless,” the woe of time-travelling while black is a detail, a hiccup, sometimes a plot exigency, but never a big theme unto itself, and so Rufus always exists in a secondary position to the show’s two white protagonists.

The British sci-fi show “Doctor Who” has also recently made strides in addressing race in its narrative. For decades, one white man after another starred as the titular alien who travels in time and space. Of the Doctor’s travel companions, too, there have only been a couple of people of color, and the show has handled the issue awkwardly. In Season 3 of the rebooted series, Martha Jones, the Doctor’s black companion, asks him how her race will be addressed in seventeenth-century England; he brushes her concerns off easily, saying that she should do as he does and walk around like she owns the place. Race, he suggests, is an inconsequential construct, except when it isn’t—when they meet Shakespeare, the bard fetishizes her blackness by way of hitting on her.

It was an episode of the most recent season of the series, starring the actress Jodie Whittaker as the first female Doctor, that signalled a more fearless approach to race. In the episode “Rosa,” the Doctor and her three companions, Graham, a white man, Yasmin, a Pakistani woman, and Ryan, a black man, have to insure that Rosa Parks incites the civil-rights movement as planned. The episode poignantly addresses each character’s specific experience during this moment in history: Yasmin and Ryan encounter people who are either confounded by or openly hostile toward them, and they trade stories about how they still face racism in the present day. Meanwhile, the Doctor and Graham are forced to act complicit in the practice of segregation. The episode’s climactic scene, right before Parks refuses to give up her seat, is so affecting because Graham must confront the racial privilege he was born with and a history of injustice that precedes him.

When “See You Yesterday” opens, in C.J. and Sebastian’s classroom, their teacher—played by Marty McFly himself, Michael J. Fox—is reading Octavia E. Butler’s novel “Kindred” at his desk. In Butler’s book, a black woman living in Los Angeles in 1976 is repeatedly transported back to pre–Civil War Maryland, to a plantation where her ancestors lived. She tries to protect her lineage while also trying to stay alive, in a time when she’s deemed a slave. She’s literally beaten down by the past—whipped and nearly raped—and, after she time-travels for the last time, one of her arms is left behind, in the past. History has taken a part of her, and she will never be whole in the present. In “Kindred,” as in “See You Yesterday,” history is never just relegated to the past for black people. It’s living.

“See You Yesterday” ends uncertainly, on a long shot of C.J. Her determined expression, as she runs toward the past again, could promise hope or folly. But in every version of the story, there’s injustice and a black person inevitably hurt or dead. This cyclical sorrow, the movie seems to say, is the state and cost of institutional racism in America. Though time-travel narratives so often allow white protagonists to freely jump the time line, there’s an open field of possibilities for the genre to look at history through the eyes of the oppressed, forgotten, and marginalized. What “See You Yesterday” asserts is that, for a people hindered by prejudice and police brutality, the future is a privilege. “See you yesterday,” C.J.’s brother tells her solemnly, near the end of the film. For these black travellers, there are only yesterdays to contend with; tomorrow is just out of reach.

Russia Probe Testimonies Reveal There Was No Collusion Between Moscow &...