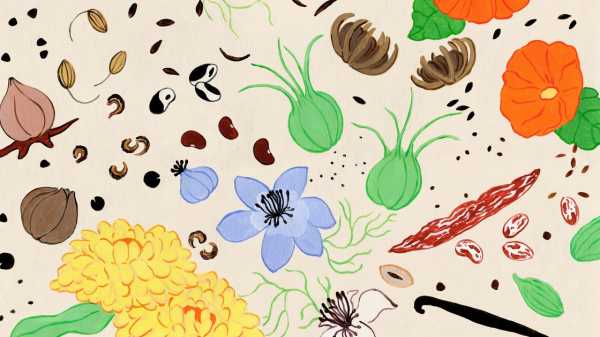 Look outside. The streets are orgies of blossoms, boughs of cherries and pears histrionically thick with flowers in basic white and show-off pink. Birds are staggering through the air carrying hay for nests; gorse begins to emit its confusing scent of coconut sunscreen; silken magnolia buds wax and thicken. No matter what despairing circumstances humankind is living in, springtime in nature is a perfect world of potential. If one is even faintly moved by an urge to tend and nurture, by a desire to eat the freshest possible leaves or to produce color from drab soil, it’s also the time to buy some seeds.

Seeds are the gateway drug to gardening. Like the best vices, those cheap little packets offer excitement, gratification, and, crucially, a desire for more; it is humanly impossible to buy only one. And, naturally, with gratification comes shame and buyer’s regret: the self-loathing that comes from having far too many, and then obtaining more, by any means. Every vaguely modern supermarket or old-fashioned hardware shop offers the temptation. For the seriously far gone, there are dangerous Web sites that offer dozens of heritage radishes and tomatoes called green zebra or noire charbonneuse, black krim, Oregon spring. In an emergency, armed with only a small manila pay-packet envelope, even a dog-poo bag, you may find yourself on a forgotten embankment collecting dried-up chive flowers in the hopes that they, too, might be planted and grown.

To the unafflicted, seeds may seem like nondescript black dots, distinguishing themselves only once they’ve blossomed. But look closely and you’ll see that they are quietly astonishing in their variety, particularly when they’re patiently waiting in the dried remains of last year’s flowers: the papery discs of hollyhock, neatly arranged in doughnut rings; glossy nigella specks in spiky spheres; the fat succulence of apples; the pony flank of chestnut; speckled borlotti or elma beans, black and white like baby killer whales; poppies like salt shakers; and calendula, my favorite, an explosion of prickly crescents, dry brown springs tight with life. Then there is the irresistible promise of quantity. Some packets of seeds contain two thousand potential lettuce leaves, golden wallflowers, or azure cornflowers. If one is addicted to the bitterness of Italian leaves or spicy Asian greens, the prospect of hundreds of variegata di Castelfranco, pistachio fading to lunar cream, with splotches of gory maroon, or jagged mizuna, the pride of any salad bag, let alone the glaucous dust-green-with-magenta-highlights red Russian kale, is transfixing.

But, as with all pleasures, this one is complicated. Recall the Bible’s parable of the sower, whose first batches of seeds were devoured by birds, languished in inadequate soil, and withered under a scorching sun. Perhaps he overlooked the packets’ stern warnings about overcrowding and etiolation and damping off, their instructions to carefully sprinkle pre-wetted soil extremely sparsely with, say, five seeds at a time.

I tend to ignore them, too. Like most keen amateurs, I am a maximalist; the mesmerizing dream of a glut of cime di rapa is impossible to resist. In the busy season, February to September, when I should be exercising or writing novels or, in weak moments, sleeping, I instead heap flower pots with old house-plant soil, a handful of rotten leaves, and whatever grit I can scrabble up from my urban balcony, for drainage. I will scatter seeds criminally thickly on the surface, pat them down, and then remember that they need cover and besprinkle them with some soil that I’ve inevitably dropped on the kitchen floor. Belatedly, I’ll water the lot. Then I’ll wait.

It is very difficult, when the miracle of life is about to dawn, not to watch. Sometimes I manage to go hours without looking. More often, I meddle constantly. Certain large seeds—squash, broad beans—produce shoots and initial leaves of such succulence that one can almost see them breaking the surface, usually with a touching little bonnet of a seed case that cannot responsibly be left unpicked. Others—kale, arugula, Japanese giant-red or green-in-snow mustards—germinate so thickly that one must thin and eat the excess on a minute-by-minute basis. I used to keep seed trays on an elegant ziggurat of chairs and books under my sunny study window, until I realized that watching peas sprout was doing nothing for my word count. It’s essentially a full-time job, the watching and waiting, and that’s before the toil begins of bringing the seedlings indoors and outdoors to harden them off, like a toddler being aired by an old-fashioned nanny. I don’t yet have a Japanese seedling brush, which I’ve coveted, but knowing that they exist makes my burden easier to bear.

And then, at last, the addict’s reward: the pleasure and pride that results when the seeds have mostly sprung, the extras have been pinched out, and the seedlings are beginning to strengthen. After that: pure disaster. Growing seedlings is all very well, but, unfortunately, it results in new plants, which must then be kept alive. You may have acres to fill, but some of us are dealing with cramped containers: thirsty, polluted, already stuffed with the wounded survivors of last year’s gardening. What on earth do you expect me to do with more?

Trump says he trusts Kim to follow through on his promises,...

US Air Force Kicks Off Competition for Potential Military Ops in...