Home Culture Seven Years on the Margins in Rural Mississippi | 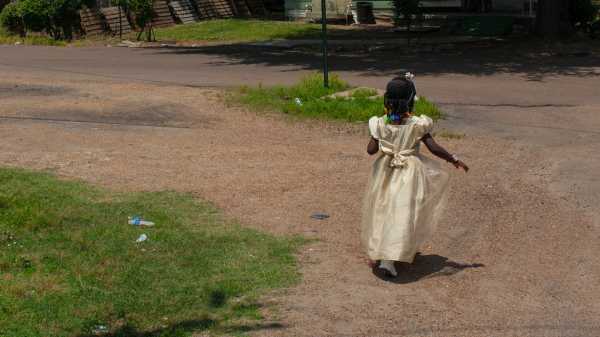 The small city of Greenwood, Mississippi, at the eastern fringe of the Delta, is home to the historic black neighborhood of Baptist Town. The area is known for its contribution to the blues—musicians like Robert Johnson and David (Honeyboy) Edwards played there—and for housing some of the city’s poorest residents. According to census data, forty-eight per cent of Greenwood’s black residents live in poverty, compared to eleven per cent of white residents. Baptist Town, an enclave of mobile homes and shotgun shacks, cut off from the rest of the city by train tracks, has the feeling of being stuck in time. In the 2011 film “The Help,” it was used as a stand-in for Mississippi during Jim Crow. 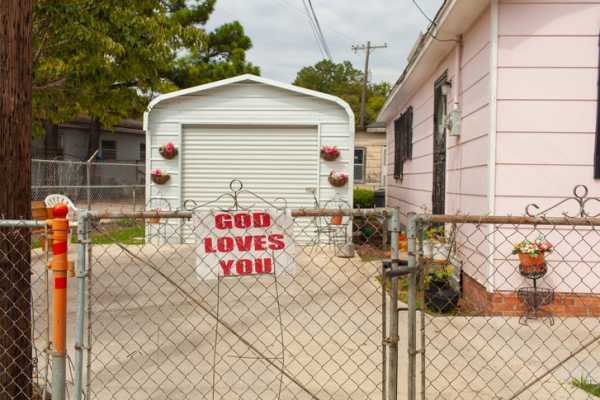 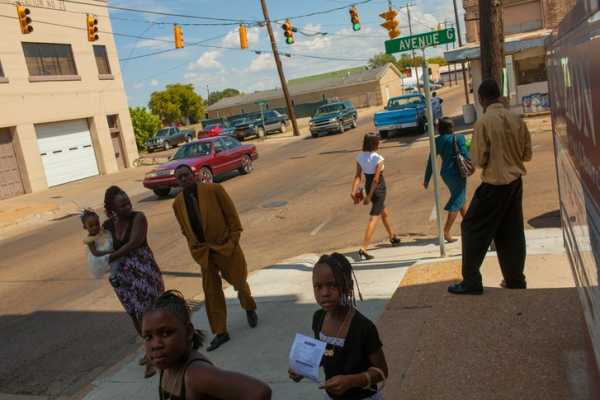 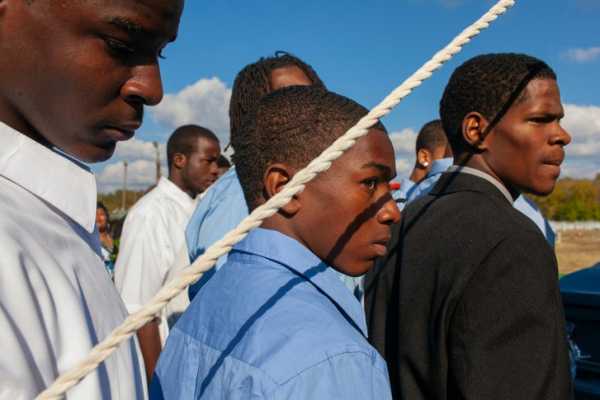 The photographer Matt Eich first visited the neighborhood while on a photo assignment in Mississippi in 2010. Eich lives in central Virginia, but over the next seven years he returned to Baptist Town often, photographing football games and funerals, bachelor parties and baptisms, to create a detailed portrait of life there.

His pictures, which are collected in a new book, “Sin & Salvation in Baptist Town,” form the second in a planned four-book series about contemporary America. In the first volume, “Carry Me Ohio,” Eich documents mostly white communities affected by the loss of mining and manufacturing jobs in the Rust Belt. While the people of rural Ohio and the people of Baptist Town occupy vastly separate worlds, Eich captures the visual echoes between their lives on the country’s economic fringes: dilapidated houses, boarded-up stores, worn-down bodies. In Baptist Town, a woman named Ellen reclines in bed while recovering from a stroke, a cigarette held to her lips. A group of teen-age boys attends the funeral of a friend who had been shot and killed after a dispute, an angular shadow from a tent rope crossing their solemn faces. 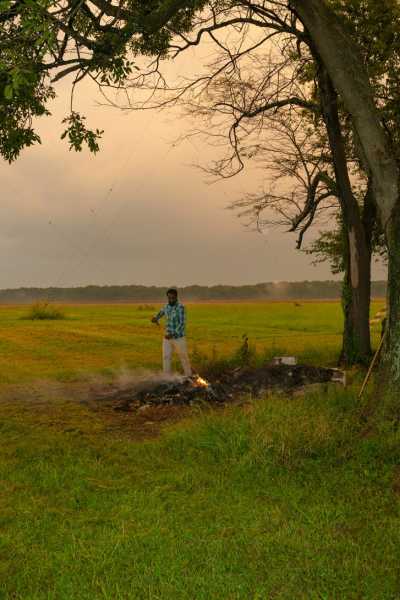 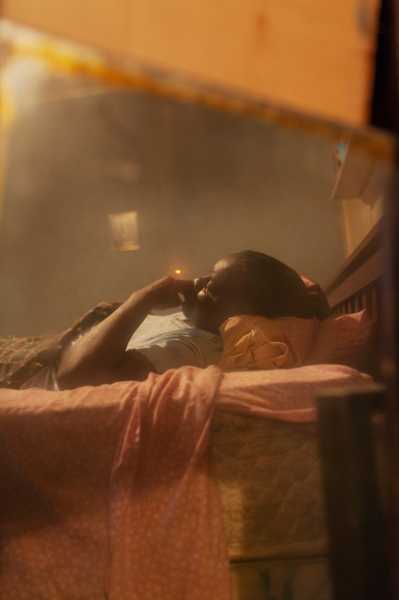 “Ellen after her stroke, Greenwood, Mississippi,” 2010. 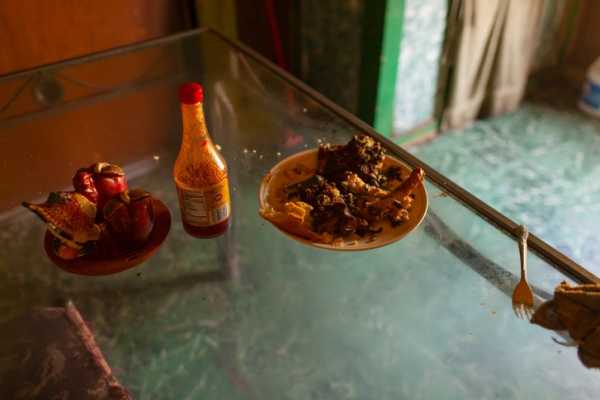 A common aspect of the experience of poverty in America, Eich’s two books suggest, is the role of family and community as sources of hope. A young woman in Baptist Town extends her arms to a toddler taking his first steps. The tattooed arm of Winky, a recurring subject in “Sin & Salvation,” gently wipes frosting from his daughter’s face. The role of faith is conveyed in an image of crisp dollar bills for tithes, or in another of a man’s feet wearing socks decorated with the phrase “Jesus Is the Way.” In an essay included in the book, the author W. Ralph Eubanks writes, “Once you remove the idea that the people captured in these photographs exist as an impoverished ghettoized ‘other,’ you see what exists in any community in this country. And that is caring, intimacy, and a desire to support the neighbors so that everyone survives and thrives.” 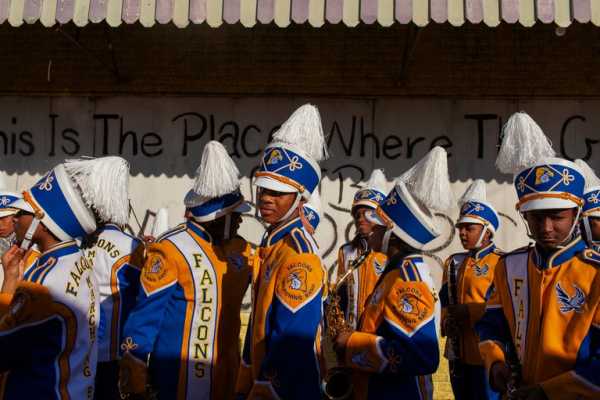 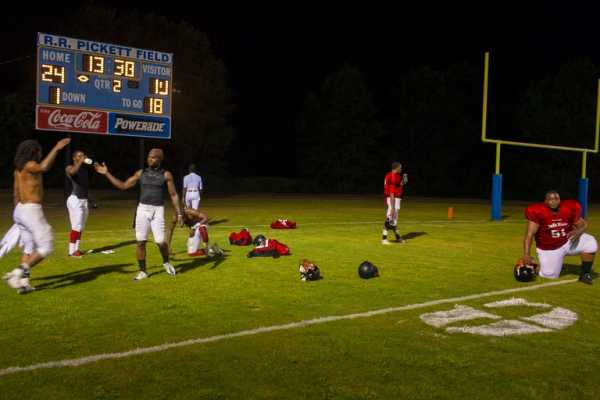 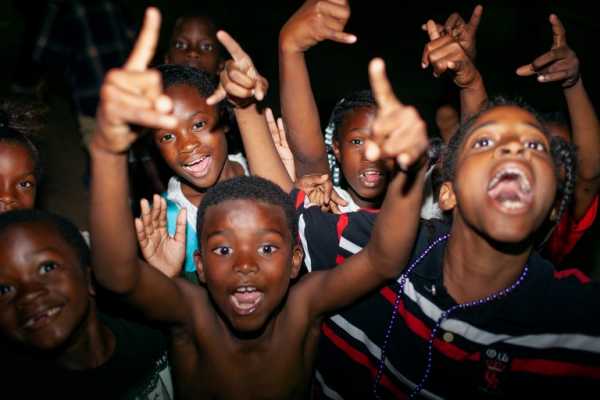 Baptist Town is an insular community, and when the outside world does intrude it is often in unwelcome ways. Eich documented Baptist Town during a period of growing racial discord across the United States: repeated police shootings of black men, the birth of the Black Lives Matter movement, and the rise of Donald Trump, who proved that racism in America was not only still pervasive but could be exploited to win elections. In one of Eich’s photographs, a helicopter hovers overhead, partly obscured by the glare of its probing searchlight. White faces appear in just two of the book’s eighty images, on the wall and television of a photo-studio waiting room and in a scene from a meeting of Greenwood’s City Council. Eich, who is white, told me that, while he generally felt accepted in Baptist Town, once, when he was taking pictures of a group of children, a woman nearby urged the kids to throw rocks at him. 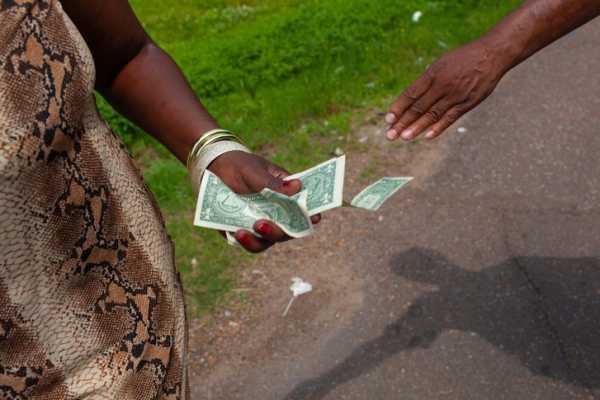 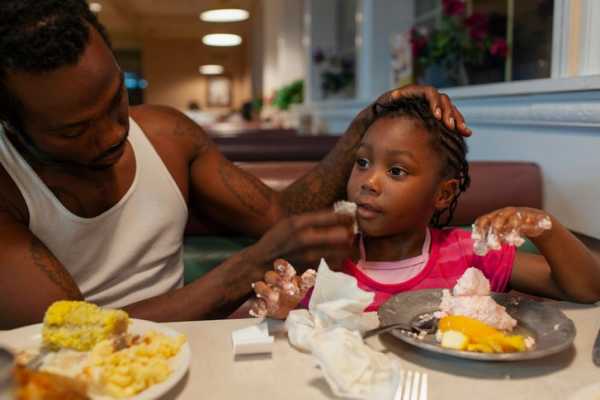 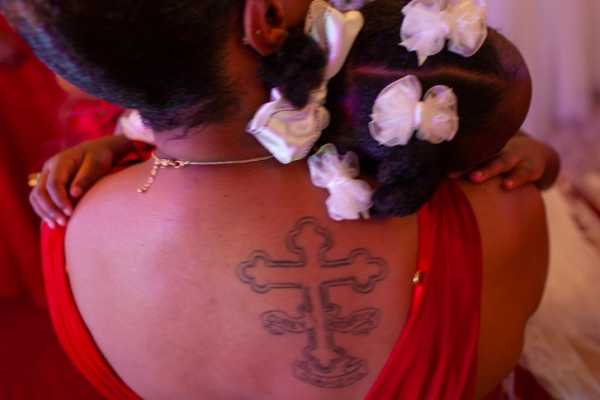 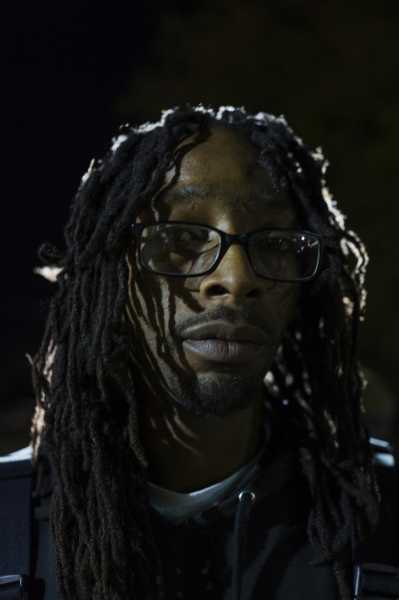 One of the most powerful elements of “Sin & Salvation” is a transcript of a conversation between Eich and one of his subjects, a man named Dash Brown. Born in Florida and raised in Chicago, Brown moved with his family to Greenwood as a teen-ager. His mother grew up there, and hoped that returning would help keep Brown and his three siblings “away from the city streets.” The neighborhood of Baptist Town, Brown said, is like “a mansion with a lot of rooms”—everyone knew everyone, and “you basically lived in everybody’s house.” But it is also a place of scant opportunity. Brown was thirty-four years old when they spoke. When he first arrived in the neighborhood, there were still decent factory jobs. In the two decades since, “the neighborhood has been abandoned.” Houses he used to play in as a kid have been torn down. It’s become easier to get drugs or a gun than to find a job. “Leaving is the safe way out, but prison and death are more common,” he said. Racism in Greenwood is rampant, “without any room for change.” 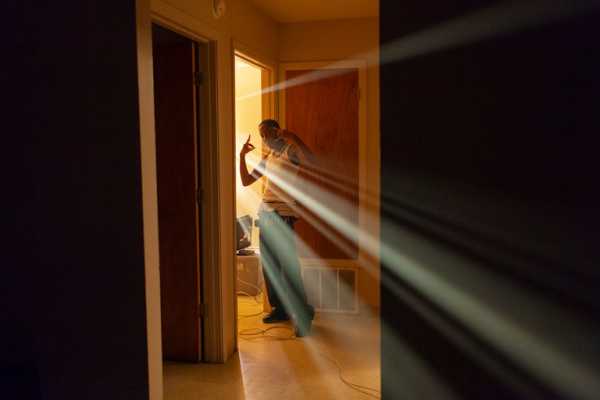 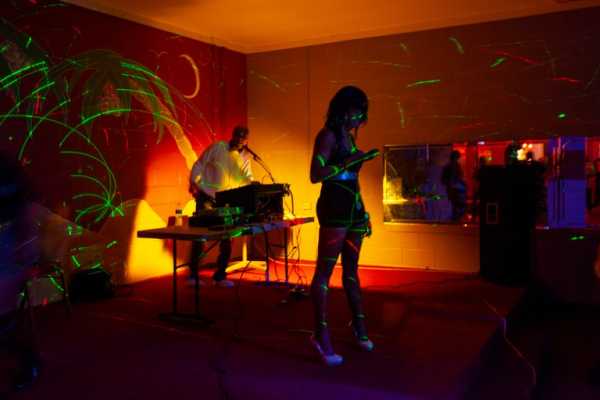 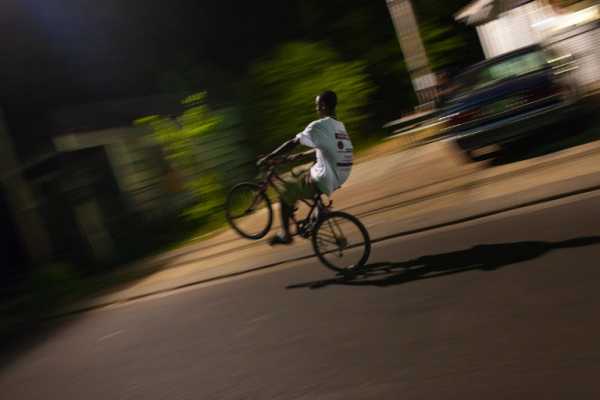 Brown told Eich that he was “literally the only white guy” with a camera he knew of who had been able to gain locals’ trust. Even so, the images in “Sin & Salvation” can be divisive. Brown said that a friend of his complained that Eich’s work “made Baptist Town look bad.” But Brown said that he views the images as a forced reckoning with the struggles that his community faces. “We live in imaginary worlds where we play like everything’s fine and dandy,” he said. In reality, if you’re poor and black in this country, things are not O.K. Brown told Eich, “I feel we’re systematically being broken again in America.” 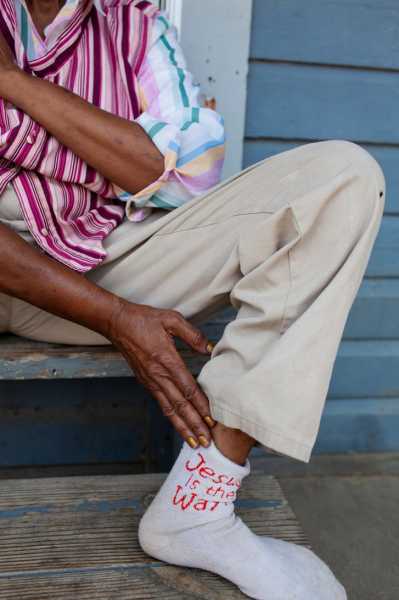 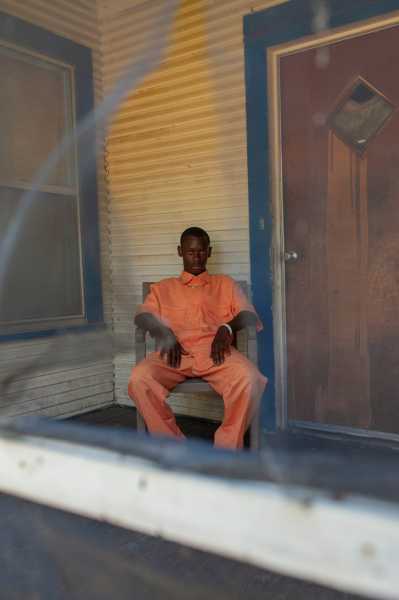 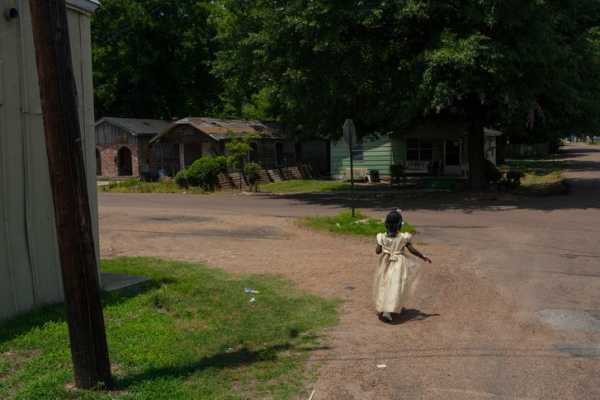