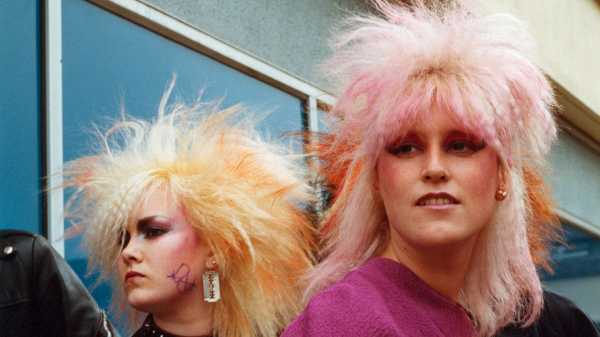 In Shirley Baker’s photographs, men are caught gesturing, or mid-stride. Women slip past or sit, reflecting; sometimes they are close together, conversing, conspiring. Children play, occasionally surveying the camera with a look somewhere between innocence and wisdom. Older people look into the lens with an almost comic stoicism, their years and routines readable on their faces: cigarette-wrinkled lips; helmet-like hair that, through years of repetition, has grown into a distorted, heightened version of what it once was. In some images, people are staring, not always at Baker but at some unfurling scene—parents look at their children, beachgoers survey other holidaymakers, shoppers regard new wares. 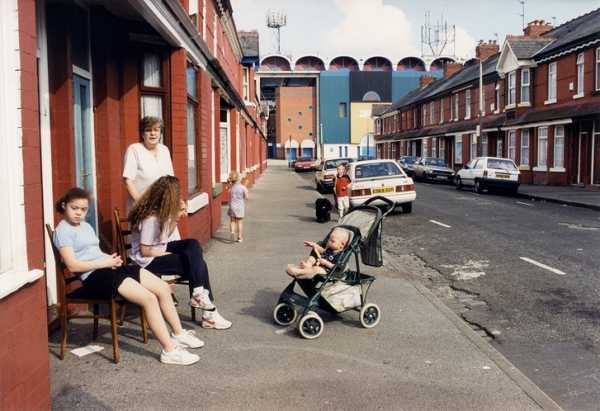 Shirley Baker was born in Kersal, North Salford, England, in 1932. The body of work for which she is remembered is fairly limited, encompassing her street photography of Manchester and Salford, shot between the 1960 and 1973 (and including early experiments with color, beginning in 1965). The images reflect on a time of rapid economic and social change, when the British-built environment, and ideals of home and community, were upturned. In the wake of the Housing Repairs and Rents Act, of 1954, 1.3 million homes were demolished between 1955 and 1973. In Baker’s images, we see the clash of old and new as sooty children play in front of decrepit houses, with tower blocks emerging in the distance. “I did know that fundamental changes were taking place … and nobody seemed to be interested in recording the face of the people or anything in their lives,” Baker wrote in “Street Photographs: Manchester and Salford,” in 1989. “My interest grew into a compulsion even though the notion of someone wandering the unpicturesque streets of Manchester and Salford with a camera seemed quite crazy to most people then.” As Colin Ford, the first director of the National Museum of Photography, wrote, of Baker, “Not since the photographs of the Farm Security Administration in America in the thirties have I seen someone photographing people in deprived states and getting herself so involved.” 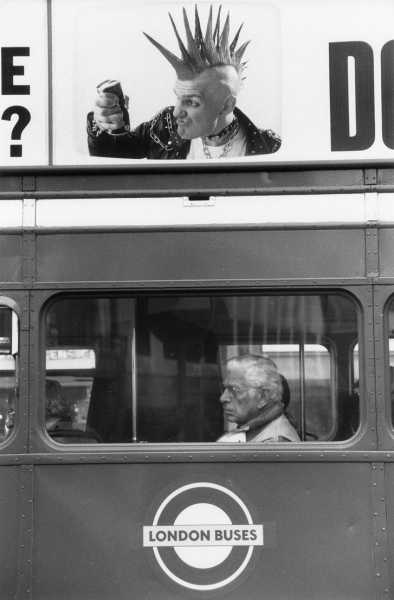 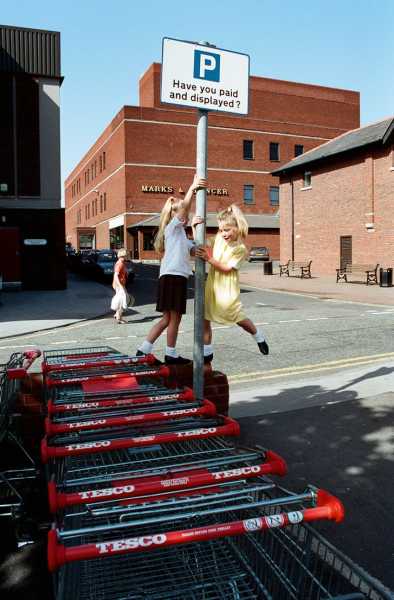 Baker, who died in 2014, left behind a weighty archive. Two years after her death, when I was researching an exhibition of photography relating to the North of England, I visited the home of her daughter, Nan Levy, and found boxes upon boxes of prints dating through to the early two-thousands. There were images shot elsewhere in the North of England; numerous pictures of London, where Baker obsessively documented people browsing high streets; images taken in the South of France, where she holidayed each year; and even pictures shot in Japan and America, made as she accompanied her husband, a doctor, on work trips. Together, these images showcase a master of street photography whose total body of work has not been celebrated properly. They show an image maker with an analytical eye, someone who caught moments of great coincidence or aesthetic harmony, but who saw through the purely visual into something more human—the great madness and oddness of this life. “I like to watch people—not as a snooper with a hidden camera, but as a member of the public like anyone else on the street,” Baker wrote, in one of the many essays and texts left among her belongings. She is one of her subjects, she argues—as flawed, as dignified, as hopeful.

The threat of the unstoppable march of change hangs over all of Baker’s images. They reveal a fascination with ever-evolving ways of living—with how the old is discarded in favor of the glossy, the plastic, the fresh, just as the terraced houses of the North were knocked down to make room for modern abodes. When making images of London shoppers in the nineteen-eighties, the interest was both visual and political. “I was struck by the opposites I observed on the city streets; the squalor and luxury, the sadness and joy, the brashness and elegance, the idleness and purposefulness, but, most particularly, by the loneliness amongst the crowd,” she wrote. She saw “homelessness, poverty, inequality, litter and non-caring attitudes” and wanted to capture “the spirit of Mrs Thatcher’s time.” 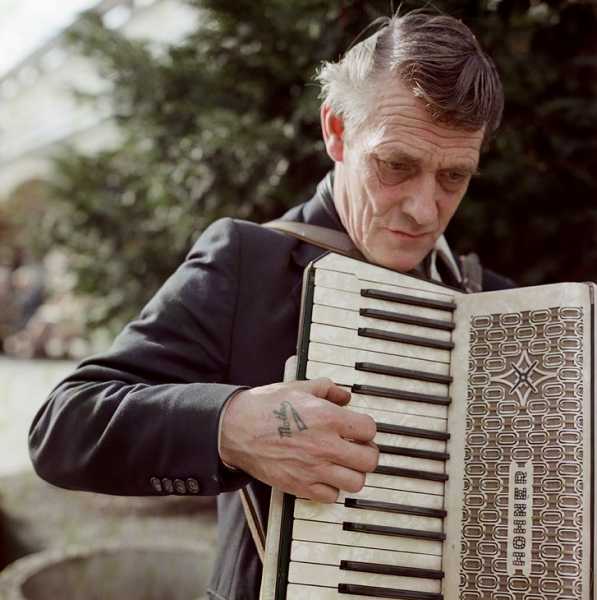 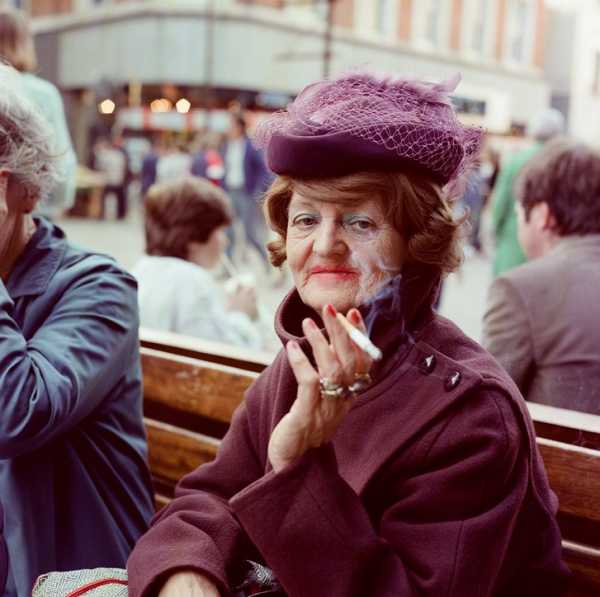 Baker looked closely at the way we all try to live up to society’s expectations, catching moments when the mask inevitably slips. A perfectly groomed woman looks, momentarily, frazzled. A powerful man looks, abruptly, absurd. Baker’s pictures are informed by the choke of tradition while also being intriguingly ambivalent toward it. They play with cultural stereotypes and truths (and the spaces in between), nodding to the weight of the English class system, to ideals of continental European liberalism, to predictable youthful rebellion—treating them simultaneously as amusing punch lines and significant identities, worthy of representation. She had a clear respect for her subjects yet also a penetrative gaze that could veer, deliciously, toward irony—she undoubtedly had a great wit. Her images can, taken alone, read as sentimental, but that is offset by their honesty; they make no attempt to gloss over a gritty street, a collapsing community, the spread of poverty. Typically, curators and historians of photography have tended to prioritize the formally wrought over the casual or the tender. But look closely and Baker’s pictures, and the characters she captures, are never actually quaint or simple. 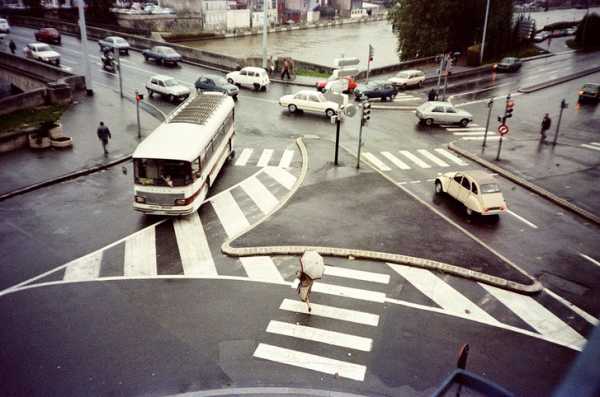 There are many reasons why Baker’s work hasn’t got the acclaim it deserves. Some have written that she was private about it. This is not the case—her archive is full of endless letters that she sent to publishers, editors, institutions, trying to get books made, series published, and exhibitions off the ground. Each rejection letter is carefully stored. At points her pictures were published in Amateur Photographer, The Lady, Photo News Weekly, the Guardian, and Cheshire Life Magazine, among others. 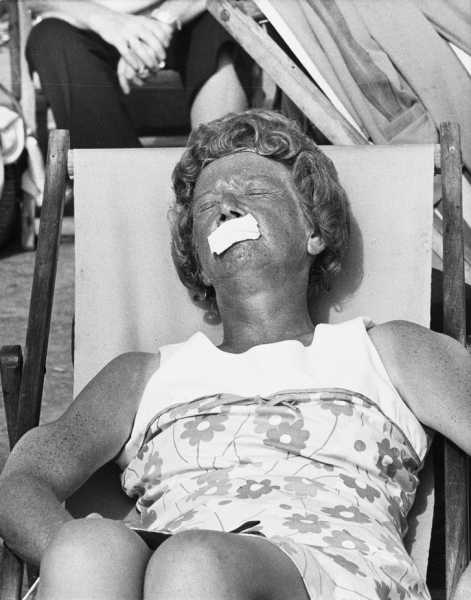 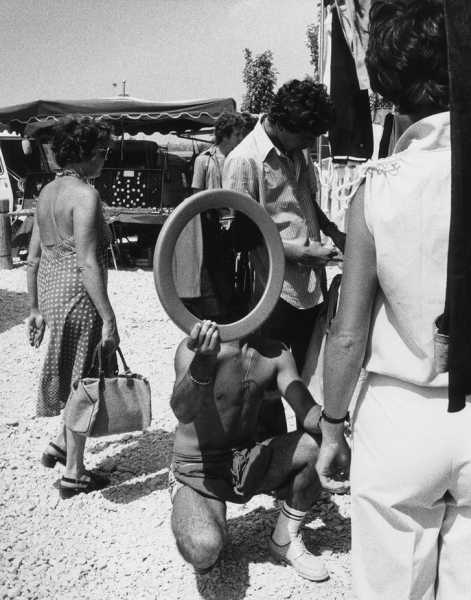 “As usual on discovering an archive of such depth, precision, astuteness and thoughtful observation of her own strange times of Britain’s North in the 1950s–70s, I ask myself: how could we have not known?” the historian Griselda Pollock writes in the catalogue for “Women and Children; and Loitering Men,” an exhibition from 2015 of Baker’s early images from the North of England. “Why have our national art and museum institutions failed to collect, conserve, exhibit an artist of this order? Is it that she was a woman and a Northerner? Over the last forty years, we have struggled to undo the indifference and wilfully gendered disregard for what women offer to the world through their situated vision and their creative engagement with the social and affective fabric of daily life.” 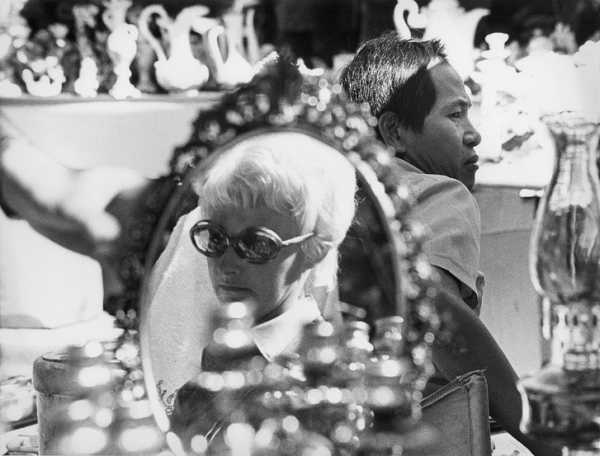 All of this is certainly true, but it is also the case that that indifference has continued, perhaps taking on a more nuanced disregard, wherein Baker’s work is geographically pigeonholed and she is seen simply as a postwar documentary photographer of a restless period of change in Northern life, rather than the complex artist that she was. Until now, her subject matter has tended to eclipse her. 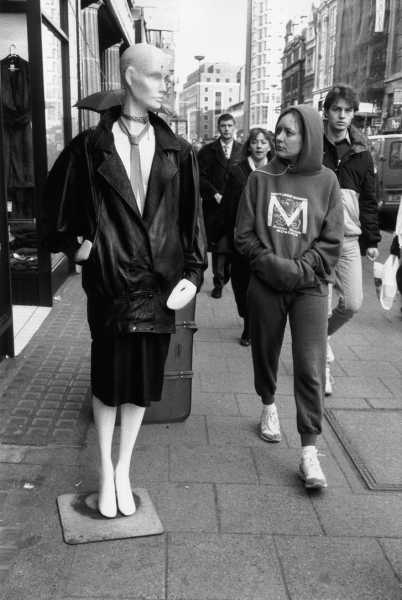 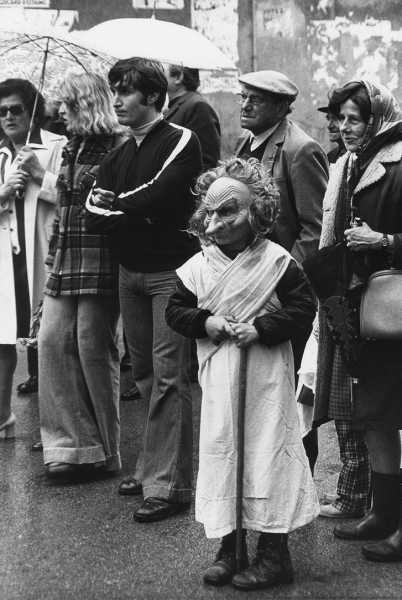 Baker liked to talk of photography’s ability to “freeze the ‘here and now,’ ” which inevitably, as she observed, becomes the “there and then.” Of course, as she hoped, Baker’s images bridge the gap between the past and present, giving us all kinds of information when it comes to commerce, housing, gender roles, and fashion. But such is their strength that, as with truly great photographs, we are moved by the subtler notions, still relevant: big dreams; dashed hopes; youthful anger, which steadily mellows; and the inevitability of aging. Baker saw the way we rush through life, never having enough time; the way we sometimes come to resemble our pastimes, whether it be our pets, or the great giant plants we adore to grow, or the onions we judge at county fairs; the way life can, at times, be cruel; and how, for some, luck is slim, fate is harsh—no one stops to help, others go on without us. 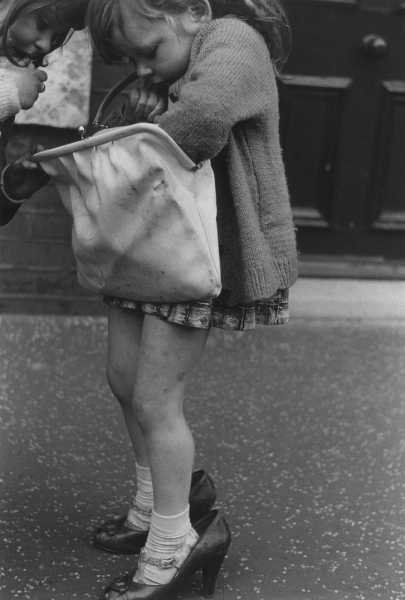 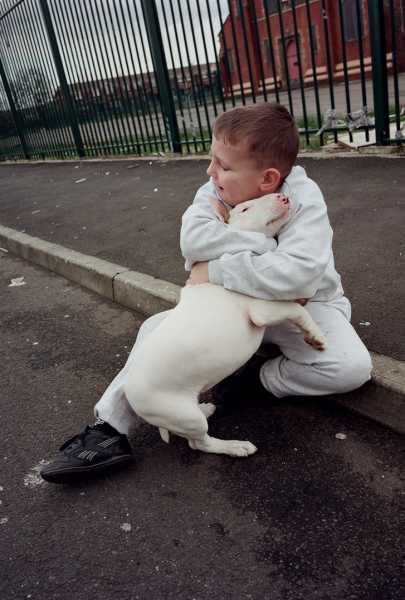 There is much fondness in all of Baker’s pictures—a decipherable desire to capture and attest to the significance of all of us. Through her pictures, she takes a stand for the vibrancy of our thoughts, the importance of our customs. In that sense, her total body of work serves as some kind of manifesto or thesis, which argues that we are all worthy of attention, we are all interesting enough to be looked at—not regarded with bias, as some novelty, but truly seen, with dignity, respect, and reverence. In 1999, as she set to work on some of her final pictures, she wrote, with hope, to a student: “Perhaps, as we approach the millennium in a spirit of renewal, we are not only closer to understanding that we cannot live comfortably on islands of self-interest, but have reached a stage at which we can cast aside the old ‘me’ values and at least hope for an age in which people prefer to ‘belong’ and regard each other with interest and concern—even compassion.” 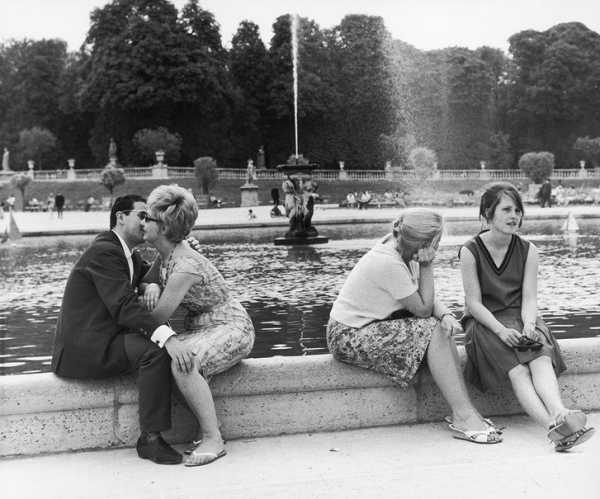 This essay is excerpted from the introduction to “Shirley Baker,” which will be published in November by MACK.

Paul Pogba’s position is a dilemma for Jose Mourinho at Manchester...

Elizabeth Warren has a new plan to make voting easier