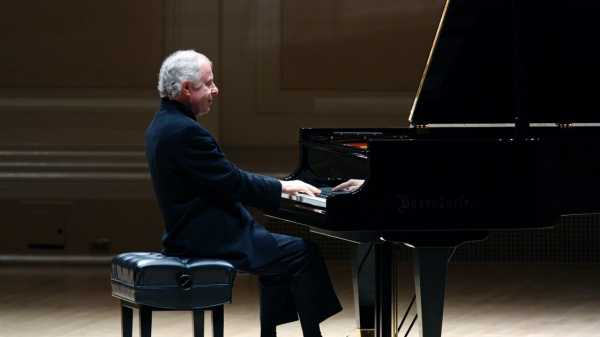 Long after most of my grandmother’s memories had faded, she would occasionally sit down at the piano bench, pull a yellowing score from a nearby shelf, and begin to play. Mendelssohn’s “Songs Without Words” were simple favorites, but it was Beethoven’s piano sonatas that were most dear to her. Before dementia overtook her, she could describe in detail the points in her life at which she had studied each piece. The “Appassionata,” for example, was the first sonata she had attempted on her own, without the guidance of her legendary teacher, Ms. Berlin. She was in her early twenties, and the sonata became the leitmotif of my grandfather’s courtship: he continued to whistle its theme to her for decades, on walks in their leafy Jerusalem neighborhood.

I cannot claim the same visceral connection to Beethoven, though his music has always resonated with me more deeply than that of most composers. Still, I could never quite put my finger on why—until, recently, in a more solipsistic musical encounter than the one my grandparents shared, I spent a spate of sleepless nights listening to András Schiff’s lecture-recitals on the composer’s piano sonatas.

In the mid-two-thousands, when Schiff performed the full cycle of sonatas at Wigmore Hall, in London, each of his eight concerts was preceded by a separate lecture-recital, in which he explored and reflected on the works more deeply before his audience (Wigmore Hall has since posted the lecture-recitals on its Web site). As Schiff opened the first evening of his lectures, which covered sonatas one through four, he advised that, ideally, music should be experienced directly—not picked apart or overanalyzed. Talking about music, he added, qualifying his own endeavor, is “really not my métier.” Still, since Alfred Brendel’s retirement, a decade ago, Schiff has arguably become the éminence grise of Beethoven piano performance. (Murray Perahia and Daniel Barenboim, both in their seventies, are close contenders.) So, métier or not, Schiff’s attempt to “put a few ideas into words,” as he phrases it, is well worth a listen—even for those who know the sonatas backward and forward.

As a verbalizer of music, Schiff has neither Leonard Bernstein’s easy charisma nor Glenn Gould’s charming eccentricity. Outwardly, he is, indeed, most like Brendel, a fellow Central European who is a generation older but shares aspects of Schiff’s ironic wit and demeanor. (With their clear blue eyes and shocks of receding white hair, the two even look alike.) A serious scholar of Beethoven, Schiff nevertheless cautions against making too much of the investigations of musicologists. Instead, he is a literalist, who insists on focussing on the “musical calligraphy”: ideally, a manuscript, or a first edition if a manuscript has not survived.

Some of Schiff’s commentary, then, is inevitably highly technical. During the final session, for example, he discusses the controversial interpretation of a specific tempo notation in the fugue of the Sonata Op. 110, which was the subject of a heated, lengthy debate in The New York Review of Books in the nineteen-nineties between Brendel and Charles Rosen, the pianist and writer. (Brendel accused Rosen of scholarly “misreading”; Rosen, in response, suggested that the “Wagnerian resonance” of one of Brendel’s metaphors “can be applied to Beethoven only with a certain lack of tact.” Schiff seems to agree—he says Rosen“won with a knockout.”) With regard to a particularly challenging trill in the third movement of the “Waldstein” sonata, Schiff notes that Beethoven himself allowed pianists to “leave certain notes out” if they were not up to the task. Still, Schiff isn’t all serious—there are even some gags running through the series, like Beethoven’s pupil Carl Czerny and his “terrible etudes.”

For anyone who’s not a concert pianist, the deeper value of the lecture-recitals comes when Schiff conveys his emotional intuition for the flow of a piece, or points out moments of particular beauty; when he accentuates how naturally one movement grows from the low murmur that ended the previous one, or when he encourages listeners to hear an orchestra in the piano, with trills as flutes and the bass line as a cello. (At the same time, Schiff audibly shudders at the thought that the sonatas ever be transcribed for another instrument.) On the startlingly beautiful opening of the intimate Sonata Op. 109, he says, “To me, the miracle of this movement is that it does not begin. It continues, it comes from somewhere. There is no distinct beginning . . . it just floats.” It is Schiff’s ability to suffuse a well-known repertoire with new color, to point out fresh vistas into Beethoven’s work, and to draw out those passages that only Beethoven could have written that I found most gripping.

Sharing in Schiff’s single-minded focus on the work at hand, in his act of extreme attention, is perhaps the main attraction of the lecture-recitals. His approach to Beethoven is deeply devotional: the listeners’ experience is not so much about learning Schiff’s “trade secrets” as it is about marvelling at his musical and scholarly dedication to every bar. It lies in partaking, if only for a brief moment, in Schiff’s heightened awareness of all the warmth and nuance that normally escape most of us.

Schiff is now well into his sixties, and in recent years his devotion to his repertoire—particularly to its German core—has, if anything, intensified. On a Thursday night at Carnegie Hall, in April, he performed Schumann’s Variations on an Original Theme, Brahms’s Three Intermezzi, Mozart’s Rondo in A Minor, and Brahms’s six “Klavierstücke” in an unbroken sequence, with no warning to the audience, who could barely clap or cough in the thin interims. The Times reviewer wrote of the event that it had been “an amazing feat of physical stamina and mental concentration for the 64-year-old Mr. Schiff”—and, to an extent, for the audience as well.

But, Schiff’s formidable powers aside, the question remains: What is it about Beethoven that makes him particularly suitable to this form of examination? The standard answer, which Schiff, too, relates, has to do with Beethoven’s humanity: whereas Mozart’s brilliance allows for one true, pure interpretation, Beethoven leaves some room for the pianist to deviate from the orthodoxy. In many ways, though, the lecture-recitals tell us as much about Schiff’s idiosyncratic, decades-long relationship with the composer’s music as they do about Beethoven himself. In the first session, Schiff shares the quip, attributed to the Austrian conductor Josef Krips, that Mozart came from heaven, while Beethoven goes to heaven. The tremendous achievement of Schiff’s lecture-recitals lies in pulling Beethoven back to earth, and into the workshop—where the pianist’s craft is as joyous to observe as that of the composer he interrogates.

As doors close in the US, China’s Huawei shifts to Europe