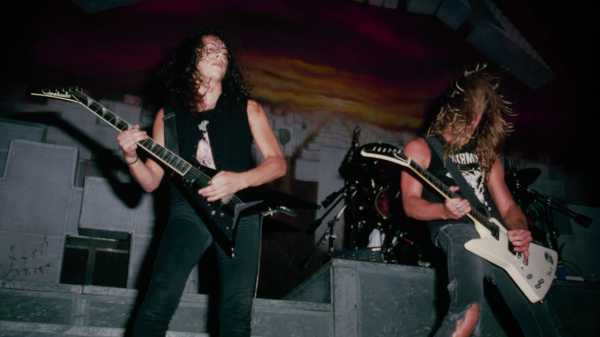 One would be forgiven for presuming that Metallica’s emotional range runs merely from pissed to super-pissed. I’m not sure there’s another American band quite as adept at reflecting a certain kind of masculine rage—a deep and splintering fear of helplessness. In the late nineteen-eighties, when Metallica formed, in San Francisco, it was instrumental (alongside Anthrax, Megadeth, and Slayer) in developing and perfecting the subgenre of thrash metal, which borrows the aggression of heavy metal but is faster, sharper, and significantly more insane. Metallica has sold more than fifty-eight million albums since 1991, easily outpacing Whitney Houston, U2, Fleetwood Mac, and Eminem. There was once a time when metal was associated chiefly with wispy mustaches, muscle cars, and dismembering cats, but it feels worth acknowledging that it’s hardly an outlier genre: there is a proven and long-standing desire for whatever catharsis metal enables. Anger endures.

Earlier this month, Metallica released an expanded box set to commemorate the thirtieth anniversary of their fourth record, “. . . And Justice for All.” I have been digging through its contents for weeks, trying to log and make sense of its pleasures. The box itself is massive. It includes the original album (now remastered) on two 180-gram vinyl records and two CDs, three live LPs, a picture disc, eleven CDs and four DVDs of unreleased content, a tour laminate, a set of four patches (ready for your mom to iron onto your jean jacket), a print by the popular metal illustrator Pushead, a folder containing facsimiles of handwritten lyric sheets, and a hundred-and-twenty-page hardcover book.

In 1986, Metallica’s founding bassist, Cliff Burton, was killed in a grisly accident. The band’s tour bus skidded over a patch of black ice in rural Sweden and rolled off the road. Burton was just twenty-four. In his autobiography, Scott Ian, a guitarist in the group Anthrax, which was on tour with Metallica when the crash happened, recounts what the rest of the band saw the night Burton died: “It was pitch black. Everyone was trying to account for everybody else, and no one could find Cliff. And then they saw his legs sticking out from under the side of the bus and they fucking lost their minds. I can’t even imagine what that was like and I never want to know.” Metallica eventually hired Jason Newsted, who was then playing with the thrash-metal band Flotsam and Jetsam, to replace Burton. Sixteen months after Burton’s death, Metallica regrouped in Los Angeles, and got to work on “…And Justice for All.”

It’s perhaps true that no band has suffered more from bungled production than Metallica. Yet none of the band’s mixes are more notorious than “. . . And Justice for All,” which contains almost no discernable bass. Was the band merely hazing Newsted? Did they weaponize their grief, finding some solace in cruelty and humiliation? “First, Jason tended to double my rhythm guitar parts, so it was hard to tell where my guitar started and his bass left off,” the guitarist and vocalist James Hetfield explained to Guitar World, in 2008. “Also, my tone on ‘Justice’ was very scooped—all lows and highs, with very little midrange. My guitar sound ate up all the lower frequencies. Jason and I were always battling for the same space in the mix.”

Well, fair. Lars Ulrich was less diplomatic in his remembrance. He and Hetfield purposefully monkeyed with the mix, he said. “We basically kept turning everything else up until the bass disappeared,” he admitted to Decibel, while still insisting that the act wasn’t spiteful. But of course it was spiteful! It was petty and demented. Young men can process pain in heavy and mysterious ways. Metallica hired Newsted, and then erased his contributions out of resentment at what they had so recently lost. It was a perfect expression of self-sabotage and misdirected guilt. “I think he was such a fan, and we hated that,” Hetfield recently told David Fricke. “We wanted to ‘unfan’ him and [have him] become as hard as we were. So [we were] trying to beat the fan out of him.” Why indulge love? Though it is dark to consider, this is also one of the richest and most perverse joys of Metallica. The band’s enmity is always authentic and unmediated.

It makes a terrible sort of sense, then, that the remastered version of “. . . And Justice for All” still contains almost no bass. The band has held true to its original vision. “. . . And Justice For All” was recorded to two-inch analog tape, which means that edits were done manually, with a razor blade. This was a difficult and meticulous job, but it was necessary to achieve the thick, throbbing, airless sound the band favored. (Metallica’s aesthetic in the nineteen-eighties might reasonably be described as “suffocating.”) “The kick drum track had been edited literally hundreds of times,” the mixing engineer Michael Barbiero explains in the new liner notes. “Each edit had been painstakingly measured with a micrometer. That was partly how the unique metronomic quality of Metallica’s double beater kick drum sound was achieved.” The album was built slowly and with purpose. My favorite part of the collection is the CD titled “Riffs, Jams, and Demos” (many of these were culled from something called “James’ Riff Tapes”). If you are interested in the odd and inscrutable alchemy of creative work, it is an engrossing document—little bits of melody eventually either coalesce into coherent songs, or they don’t.

Somehow, “. . . And Justice for All” remains a deft and fascinating document. It was Metallica’s breakthrough record, and it marked a turn away from the pure and uncompromising thrash of the band’s prior release, “Master of Puppets,” from 1986. It eventually climbed to No. 6 on the Billboard 200. Metallica performed the single “One” at the Grammys and produced a grim and terrifying music video, an instant hit on MTV. For the first time, Metallica was making capitulations to the mainstream. The band’s next record, “Metallica” (or The Black Album), which was released in 1991, completed the shift toward a slower, more melodic, and more commercial heavy-metal sound. “. . . And Justice for All” is now understood as a transitional piece, containing nods to both the band’s past and its future.

In the intervening decades, much has been written about the band’s virtuosity and muscle. They’re all hammering away like maniacs each time they play, but I find Hetfield’s vocals the most consistently remarkable—not necessarily for the quality of his tone (he sings as if he’s gritting his teeth, and finishes each line with a curled snarl, the Satanic version of Valley Girl up-speak) but for their force. How does a person continue to access that well of savagery, to effectively channel it for decades? His lyrics are no less intense. It is jarring, in our era of rosy empowerment anthems, to hear a man earnestly sing, “Hold my breath as I wish for death.”

The sense of careening elation one feels when listening to, say, the first thirty seconds of “Paradise City” or “Immigrant Song”—that’s probably never going to happen with Metallica. There’s nothing playful or glam or overtly sexy about the band. There is rarely a flare of optimism or ecstasy; instead, these songs express boundless paranoia about being rendered inert, or lied to, or ignored. The song titles on “. . . And Justice for All” sometimes border on parody (“To Live is to Die,” “The Frayed Ends of Sanity,” “Blackened,” “The Shortest Straw”). But the band’s collective anger and disillusionment are powerful. Delicacy and sweetness are supplicating, but true fury is profound. It contains its own seriousness and beauty.

Interestingly, fifteen years after Burton was killed, Metallica would once again be without a bassist. In January of 2001, Newsted acrimoniously departed the group. Around the same time, Metallica agreed to let the directors Joe Berlinger and Bruce Sinofsky make a film about them. The documentary that resulted, “Metallica: Some Kind of Monster,” was released in 2004. It’s perhaps the most riveting and piteous music documentary ever made. The band’s remaining members—Hetfield, Ulrich, and the guitarist Kirk Hammett—gathered in a makeshift studio in an old U.S. Army barrack, in the Presidio of San Francisco, to begin writing and recording “St. Anger,” the band’s eighth studio album.

It is excruciating to watch them work. There aren’t many depictions of true creative block—of what it looks like to try very hard to make good art and to fail. The band is wounded, paralyzed, stuck. What does it feel like to have both your success and your self-conception so dependent on the whims of two other dudes? Hammett, who has curly black hair and likes to ride horses around his ranch, is a serene and mollifying presence. Hetfield was deep in the haze of addiction. He’d missed his kid’s birthday because he was in Russia shooting bears and glugging vodka. One day, he abruptly disappears and enters a rehabilitation program. He’s gone for six months. Recording is paused, and the band’s management puts Phil Towle—a “performance-enhancing coach” who also acts as a kind of ad-hoc therapist—on retainer. He wears patterned sweaters and wire-frame eyeglasses, and he frets about the band’s capacity to trust and “be seen.” Ulrich gets drunk on champagne and sells his art collection at auction. Later, he plays demos of some of the band’s new songs for his father, Torben Ulrich, a professional tennis player and a jazz musician of some renown. Torben gathers his cascading gray beard in his hands. “Delete that,” he says.

Hetfield eventually returns—he will now work only until 4 P.M.—but his rapport with Ulrich has soured. They started the band when they were just eighteen. Now, they’re rancorous, bitter, and, on occasion, wildly loving toward each other. A popular insult is to call something “stock”—caustic shorthand for lame and boring, the riff equivalent of clip art. They toss the word back and forth as if it were a poison dart. Toward the end of the film, the band finally hires a replacement for Newsted: the bassist Robert Trujillo, formerly of Suicidal Tendencies and of Ozzy Osbourne’s backing band. Metallica finishes “St. Anger.”

American culture has long indulged and excused the anger and confusion of young white men, which makes it especially easy to be dismissive of angry young white men now. Metallica’s music can work on anybody, but I suspect its discography offers a particular kind of escape for boys who maybe don’t want to play football or wrestle but nonetheless require some physical outlet for the pain and confusion that flows through adolescence. These records exist, on some level, to amplify and release demons. Long may they reign.

UK Government Says COVID-19 R Rate May Have Spiked Above 1...