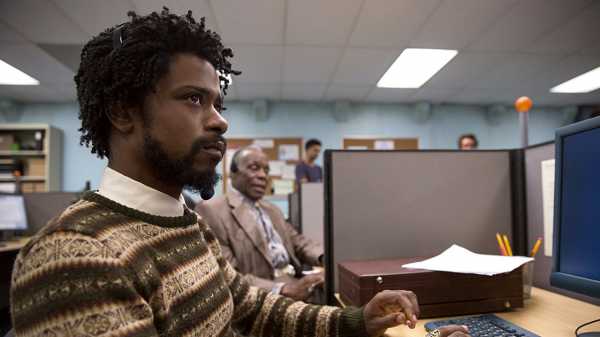 There’s a common assumption among critics that realistic films have an intrinsic claim on political importance. Yet many of the most scathing and insightful of recent political movies are fantasies, whether it’s “Get Out” or “Chi-Raq” or “Arabian Nights,” “Viktoria” or “The Love Witch” or “Black Panther” or “Isle of Dogs.” Add another to that list: Boots Riley’s first feature, “Sorry to Bother You,” which opens this Friday. It’s a rapid, profuse, overwhelmingly inventive comedy of sorts that uses caustic satire to blast the veneer of normalcy off of societal horrors that typically go unchallenged—when they are even acknowledged. The quantity, variety, and scope of its imaginative action yield a furiously panoramic view of ingrained political pathologies; its wild humor channels a righteous rage into a vision of collective resistance.

The title of the film alludes to the job that its protagonist, Cassius (Cash) Green (Lakeith Stanfield), a young man in Oakland, takes while in extreme need: he becomes a telemarketer in a shady company, called RegalView, that pays no salary, only commissions. The story—a futuristic one that’s nonetheless set in the present tense—is centered on the workplace, and focussed on the American dream of hard work, success, and prosperity, which the movie quickly depicts as a mockery, a delusion, and a nightmare. At first, the comedy, cleverly constructed through sly directorial indirections, prevails: Cassius’s job interview, for instance, involves a deadpan, over-the-top display of his qualifications, which, we soon find out, is full of falsehoods. Nonetheless, it qualifies him for the job on account of its sheer chutzpah.

Cassius is in a relationship with an artist named Detroit (Tessa Thompson), and, shortly after he is hired, the scene shifts to the two of them together in bed in a tight space that is revealed, in a ping of cinematic imagination, to be a garage. Another ping reveals that Cassius’s landlord, to whose house the garage is attached, is his uncle Serge (Terry Crews), who is pressuring his unemployed nephew for four months’ worth of unpaid rent, because he’s in danger of having his house go into foreclosure.

Riley uses tropes from sketch comedy and cartoons in order to turn extreme and antic metaphors into an apt representation of the grotesqueries that have come to pass as ordinary. One of those tropes involves Cassius’s cold calls: he is, of course, bothering people at home, and, when they pick up the phone, he and his desk land with a crash in their kitchen, their bedroom, their bathroom, illustrating the wild inappropriateness of his intrusive spiel (he follows the company’s golden rule of “stuss,” or S.T.T.S., meaning Stick to the Script). Despite his dutiful efforts, he remains an underpaid failure. His cubicle neighbor, Langston (Danny Glover), gives him some crucial advice: to use his “white voice” on the phone. Here, Riley’s writing is calmly, rhetorically majestic. Langston’s voice has a steady oratorical power that conveys his deep, life-worn, cynical wisdom regarding more than sales; it regards American life over all. The “white voice,” he explains, is the one that Cassius would use “when you’re stopped by a cop,” a voice that would convey to buyers a sense that the seller has already got it made, and doesn’t need to make the sale—a voice that says “you’ve got your bills paid.”

The gold ring for which all of the telemarketers are striving is the status of Power Caller. The well-dressed and well-paid members of that club take an elevator that’s reserved for them (regular employees take the stairs). And when Cassius begins to use his “white voice” (which is provided, on the soundtrack, by David Cross), he surges to success as a salesman—and discovers that his new responsibilities as a high-powered telemarketer to high-powered potential customers (an international list of businesspeople and politicians) involve selling the services of a controversial company called WorryFree, which is a sort of temp agency on an all-too-permanent basis. The people who sign up for WorryFree are guaranteed lifetime room and board in barracks-like conditions, and receive lifetime employment, usually in factory jobs. They wear uniforms and become, in effect, citizens apart, living as internees and indentured servants. But the promise of shelter, food, and medical care proves a temptation to many people, including Serge, whose freedom leaves he and Cassius both on the verge of homelessness.

The grain of Riley’s vision is both coarse and fine; he builds action and ideas on a large scale and then realizes them in piercingly resonant detail. “Sorry to Bother You” offers moments of offhanded intimacy and also choreographed crowd scenes, public political spectacles, and the wide-reaching mediascape that presents and shapes them. WorryFree is the subject of protests, led locally by a group called Left Eye—activists wear a smear of black greasepaint below their left eyes as an identifying mark. Detroit is a member of the group, and her political action is continuous with her art. She makes and wears her own agitprop earrings and creates grand-scale sculptures, and she’s preparing an exhibit—based on the conjoined histories of capitalism, colonialism, and slavery—that’s centered on her own self-implicating and vulnerable public performance.

What’s more, Detroit’s relationship with Cassius is as political as it is personal. Squeeze (Steven Yeun), one of Cassius’s colleagues from the cubicle-crowded bullpen of underpaid workers at RegalView, is attempting to organize a union. (By this time, Detroit, too, has taken a job there.) Squeeze brings his colleagues together for a brief but dramatic job action, and then, when the company rejects the union, the workers go on strike. But Cassius, whose job is both a lifeline for Serge’s mortgage and his own first toehold on prosperity, is conflicted—and Detroit, whose sympathy is with the strikers, forces him to choose.

Riley invents more than the action that his characters engage in, imagines more than their states of mind; he also devises the media images, on television and in a wide range of advertising, that affect them. He concocts three television channels, with all of their amply imagined broadcasts—there is a reality game show called “I Got the Shit Kicked Out of Me,” and also news reports, Senate hearings, and a film within a film by a fictitious director named Michel Dongry, which is uproariously derisive of filmmakers co-opted by the temptations of advertising.

But the grandest conceit arises in a grand setting: a party at the home of WorryFree’s C.E.O., Steve Lift (Armie Hammer), to which Cassius is invited. Lift’s hipster backslapping reveals his casual sexism and racism—he calls Cassius a “sexy chocolate motherfucker” and coerces him into rapping in front of an almost entirely white crowd of guests. (Cassius proceeds to stand the insult brilliantly on its head.) Lift is grooming Cassius for an even more lucrative job that represents an astonishingly cynical deployment of tokenism—this involves yet another plotline, a madly grandiose social-science-fiction concept that looms over the action with an apocalyptic fury. The resulting climactic outburst is too brilliant even to hint at, but its conceptual inspiration is matched by Riley’s incisive staging and depiction of it. His direction is energetic, copious, precise,, and unflinching in the face of the turmoil that he conjures and the trouble to which he seemingly bears witness. His dialogue has both a literary and expressive lilt that’s far from screenwriter-ese—it sounds like people talking about their lives rather than characters establishing their traits—and the forthright and subtle actors lend it both a declamatory precision and a spontaneous briskness, responding to each other with a remarkably fluid immediacy.

The closest tonal approximation for “Sorry to Bother You” is one of the late films of Jean Renoir, “Picnic in the Grass,” in which science fiction and political satire meet theatrical exaggeration and romantic lyricism. “Sorry to Bother You” is Riley’s first feature; he’s a longtime hip-hop performer and songwriter and also a political activist, and his movie is built on a rich loam of experience, observation, contemplation—and action. “Sorry to Bother You” is energized by indignation and a sense of astonishment that an organized ongoing assault on humanity and decency has been normalized—locally, nationally, and globally. Its phantasmagorical horrors are identifiable stand-ins for commonplace abuses. The movie offers no standpoint of neutrality or contemplative distance; it’s a film of wry but bitter diagnosis that relies on fantasy to draw a clear line and throw down the challenge that’s been sung (in the song by Florence Reece) at meetings and protests since the Depression: Which side are you on?

6 weird moments from Trump’s comments about Kavanaugh during the USMCA...

Australia Will Not Complain to WTO to Over New US Steel,...