Home Culture Springtime for Nazis: How the Satire of “Jojo Rabbit” Backfires | 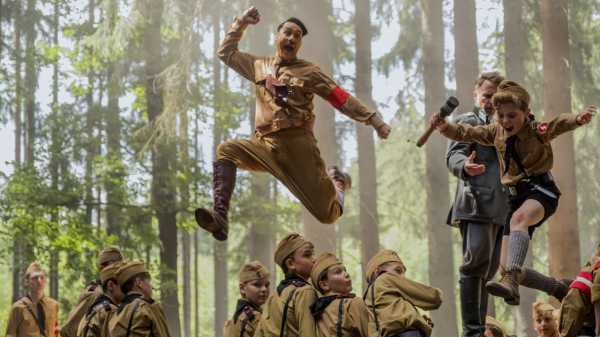 At last, the movie that Bialystock and Bloom, in “The Producers,” would have made when they got out of prison and went legit. Whereas they turned their production of “Springtime for Hitler,” intended as pro-Nazi propaganda, into the world’s unfunniest comedy in pursuit of colossal failure, “Jojo Rabbit,” meant as an anti-Nazi spectacle, is the world’s unfunniest comedy made in pursuit of success. Even though the target of satire in “Jojo Rabbit” is clearly the Nazis, the movie sharply but unintentionally satirizes itself, as well as its makers and the movie industry at large that saw fit to produce, release, and acclaim it. Although made by the celebrated writer and director Taika Waititi and released by a major studio, “Jojo Rabbit,” with its combination of extreme goofball humor (including a campily over-the-top caricature of Hitler, played by Waititi himself) and grim and earnest portrayal of the terrors of Germany’s genocidal tyranny, plays more like a comedic fantasy composed for The Onion as a reductio ad absurdum of the blinkered follies to which Hollywood and its potentates are susceptible.

The film is set in the last year of the Second World War, in a town in Germany where a ten-year-old boy, Jojo (Roman Griffin Davis), an enthusiastic new member of the Hitler Youth, lives with his mother, Rosie (Scarlett Johansson). Jojo’s father isn’t home—Rosie says that he’s away at war, but other adults tell Jojo that his father is a coward—and it’s revealed that he is suspected of being a deserter. Rosie, for her part, is quietly but determinedly hostile to the Nazi regime. Yet Jojo has decorated his room with a profusion of Nazi posters and memorabilia, and he’s often visited by his imaginary friend, Adolf Hitler (Waititi), who turns up in the boy’s moments of emotional need, bucking up his courage or assuaging his humiliations. (In his first appearance in the film, Hitler urges Jojo to “Heil” him more confidently.)

Jojo’s Hitler Youth brigade, uniformed and organized in the lighthearted tone of a scout troop from “Moonrise Kingdom,” is led by a trio of adults, Captain Klenzendorf (Sam Rockwell), Fred Finkel (Alfie Allen), and Fräulein Rahm (Rebel Wilson), who express virulent, over-the-top mockeries and hatreds of Jews and lead the boys in a monstrous ritual of cruelty. In teaching them to kill for the Führer, they order one of the boys—Jojo—to take hold of a rabbit and snap its neck. Jojo can’t do it, and runs away to the taunts of one leader, who says that if he can’t kill a rabbit maybe he himself is a scared rabbit. The boys start in with a mocking singsong chant of “Jojo Rabbit,” which is where the movie’s title comes from—but while Jojo is running the imaginary Hitler appears beside him, to remind him that it’s good to be a rabbit, that rabbits are wise and cunning and live to fight another day.

But when Jojo is seriously wounded in a mishap with a grenade caused by his clumsy effort (backed by his imaginary friend, Hitler), he’s relegated to noncombat tasks such as putting up posters in town, and he starts spending a lot of time at home alone. Hearing a noise upstairs, he investigates, finds a cut in a wood panel, pries it open with his Hitler Youth knife, and discovers a space where a teen-age girl is hiding—or, rather, unbeknownst to him, is being hidden by Rosie. Jojo is scared when he finds her. He thinks that she’s a ghost; she denies it, and he asks, “What are you?” She answers, “A Jew,” and he responds, “Gesundheit.” This is the best joke in the movie.

The girl, Elsa (Thomasin McKenzie), was a friend of Jojo’s late sister, Inge. Despite Jojo’s inculcated hatred for Jews, the lonely and curious boy spends time with Elsa in the upstairs aerie, gleans bits and pieces of her life story, and, despite the difference in their ages (he’s ten, she’s around sixteen), he develops a crush on her (and displays it by writing letters in which he impersonates her former boyfriend, a Jewish resistance fighter named Nathan). Resistance is everywhere: Rosie is revealed, early on, to be more than just privately averse to Nazis: she’s an active, albeit (as far as the movie shows) nonviolent resister. When she and Jojo pass a gibbet in the town square where five ostensible traitors have been hanged, Jojo asks her what they did, and she answers, “What they could.” As proof of their so-called crime, the authorities have pinned small anti-Nazi handbills to their clothing; it turns out that Rosie is the source of those flyers.

Meanwhile, Hitler continues to make his fantasy visitations to Jojo, whose friendship with Elsa deepens along with his anti-Semitic fanaticism. After hearing the Hitler Youth leaders joke about the difficulty of recognizing Jews, he questions Elsa about Jewish traits so that he can compile a hand-drawn instructional manual (filled with absurd caricatures and wild imaginings) on the subject. He asks about “her kind”; she answers, “We’re like you, but human.” When he asks about her horns, she says that hers haven’t grown in yet. Elsa then boasts about being one of God’s chosen people, while Jojo and other Nazis “were chosen by a weak little man who can’t even grow a full mustache.” Yet, for all these exaggerated antics regarding hatred, the movie delivers its earnest terrors in a scene involving a visit from the Gestapo, whose members, while bearing deadly threats, also get a dash of caricature, as one of them (played by Stephen Merchant), seeing the Nazi décor of Jojo’s room, says, “I wish more of our young boys had your blind fanaticism.”

Although “Jojo Rabbit” is set during the Second World War, the target of the movie’s derision is self-evident: it goes beyond the particulars of its drama to mock people who hate on the basis of ethnicity, to expose the power of propaganda and adult manipulators to inculcate such hatred in children, and to suggest an eventual cure for such hatred—namely, personal relationships that prove the humanity of the persecuted minority. Put aside the historical matter of how German Jews were deeply integrated into German society, and the likelihood that many Germans, many Nazis, knew their Jewish neighbors well. (This tragic element of history was addressed by the New York-based filmmaker Manfred Kirchheimer, who arrived in the United States in 1936 as a German-Jewish refugee, in his 1986 documentary “We Were So Beloved”—the title itself refers to German gentiles’ personal affection for their Jewish neighbors.) In “Jojo Rabbit,” the Nazis, as the iconic extreme of genocidal hatred, stand in for current-day haters.

Yet Nazis are easy targets; Hitler and his cronies need little satirizing. (They needed it in their era, and got it, not least, in Hollywood, from the German-Jewish director Ernst Lubitsch, in the film “To Be or Not to Be.”) Today, making fun of Hitler and his minions is both easy and pointless, because he poses no threat; Waititi is kicking a dead bull. The haters who need satirizing are in power, starting at the top, with members of the Administration and high-ranking advisers, and including participants in the deadly Charlottesville rally. But to make a feature film that openly mocks the President, his aides, and some of his supporters would be taking a risk that’s unlikely from a mainstream filmmaker and studio—at least, until that leader leaves office (see “Vice,” which isn’t even much of a satire).

Rather, “Jojo Rabbit” puts forward, with its blend of antics and sentimentality, something like a vision of daily life in Nazi Germany that makes conspicuous not only its terrors and oppressions but also a vision of widespread resistance. It shows, even in comedic form, the regime’s efforts to force citizens into open conformity and practical complicity with its genocidal ideology and practice. But the movie is centered on, so to speak, the good Germans—those, such as Rosie and other so-called traitors, who were active resisters, and also the blatant acts of resistance by individual Nazis who hold public office but nonetheless display risky and self-sacrificing bravery, more than once, in decisive actions that provide the movie with its crucial plot points. “Jojo Rabbit” is conspicuously a movie about the presence of good Nazis who, at critical moments, conducted their own forms of resistance from inside the institutions of power.

In this way, “Jojo Rabbit,” although set in the past, puts forward a political idea in the present tense. The film is being marketed as "an anti-hate satire," not as “an anti-Nazi satire,” and for once, advertising is truthful. The movie is not substantially about Nazi Germany but uses it as an allegory for current-day expressions and politics of hatred. In showing Jojo’s family story—which includes his mildness and clumsiness, the absence of his father, and that absent father’s past brutality (which is presented solely as heavy yelling, not physical abuse, because the movie has no room for any complicated emotional conflict), Waititi displays a sort of wan humanism in which Jojo’s fanatical Nazism seems excusable, or at least understandable, because it responds to his own personal psychological issues. No less than “Joker,” “Jojo Rabbit” is another contrivance on the theme of “hurt people hurt people.”

Above all, the subject of “Jojo Rabbit” is, in effect, “Don’t judge a Nazi by its cover”— don’t judge Nazis by their uniforms or their allegiances or their declarations or even their actions. First, acknowledge the extreme danger of offering any resistance to such a tyrannical regime, and have sympathy for ordinary people who are just trying to get by with their heads down and who instead get drawn into the bureaucracy of evil, where, despite their true feelings, they have to feign commitment while doing their jobs or following orders. Second, try to understand the pain that drove them to support or identify with the rule of a bloodthirsty dictator, that motivates them to espouse and advance a deadly hatred of another ethnic group, or that caused a naïve and damaged person to imagine Hitler as a good guy. Third, have confidence—or, rather, to borrow the Hollywood catchword that Steven Soderbergh has definitively satirized, “hope”—that, when push comes to shove, a Nazi’s essential decency and humanity will come to the fore and save the day.

The present-day didacticism of “Jojo Rabbit,” by encouraging viewers to look with benign empathy at Nazis, the cinema’s iconic worst of the worst, is also encouraging a similar sympathy for the Trump supporter next door, and even for the self-caricaturing Trump himself. The actual target of “Jojo Rabbit” isn’t really the haters, it’s those who would presume to hate the haters. The movie doesn’t so much satirize Nazis, let alone expose the fraudulence of contemporary hatemongers (such as neo-Nazis or alt-rightists) or mainstream Republican Trump-cultists. Rather, the movie ultimately cautions against the easy contempt and dismissal of them by liberals and progressives: there are a lot of very fine people on both sides.

We’re not hearing enough from 2020 candidates about things they’d be...

US Has ‘Responsibility’ to Pay Afghans Reparations After Taliban Peace Deal...