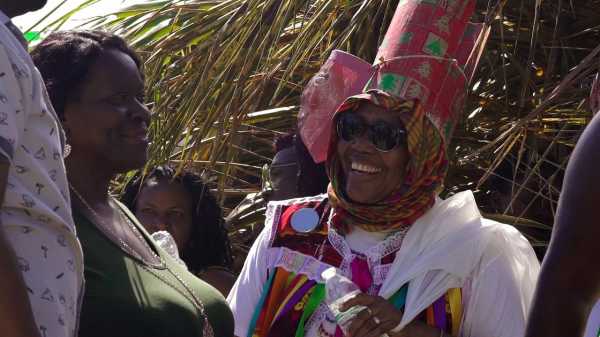 Ireland, Northern Ireland, some parts of Canada, and Montserrat, a small British Overseas Territory in the Eastern Caribbean, are the only places in the world that recognize St. Patrick’s Day as a public holiday. The Irish were some of Montserrat’s earliest settlers, and, on St. Patrick’s Day in 1768, the African slaves on the island planned an uprising that failed—nine slaves were hanged. St. Patrick’s has now become a ten-day festival to honor that rebellion, to celebrate the island’s history, to contend with the lasting Irish influence, and to invest in Montserrat’s future.

I visited Montserrat for the St. Patrick’s Festival this year; it began with a torch lighting at the silk-cotton tree at Cudjoe Head—a village named after the man who led the 1768 uprising. The slaves in Montserrat knew that their masters would become drunk and distracted while celebrating their patron saint, and they sought to take advantage. But the plan was discovered and the Irish overseers were ready. Cudjoe, the insurgency’s ringleader, was caught and executed. His head was placed on a silk-cotton tree to caution the slaves away from attempting another revolt. Slavery on Montserrat was ultimately abolished by the English, in 1834, but its legacy can still be seen. Many Montserratians have Irish last names, the Irish Catholic village names have been largely retained, and the colors of Montserrat’s traditional dress are orange and green. Still, the island’s residents and diaspora do not want St. Patrick’s Day to become overly Hibernicized. In the early nineties, the tourism board introduced leprechauns to the annual parade, and locals were offended. “We must be careful what model we establish for the celebration,” the historian Howard Fergus wrote. “It should not develop into an Irish parade of the type that occurs in American cities.”

My roots can be traced to Montserrat, and I’ve been to the island countless times since childhood. My grandfather was a colonial officer for the British government, and my father and his four siblings were raised in Richmond Hill, a village on the southern half of the island that has since been abandoned. In 1995, the Soufrière Hills volcano, after three centuries of inactivity, awoke from its dormant state, and the ensuing eighteen years of eruptions and explosions rendered the south of the island uninhabitable. The deadliest eruption occurred in the summer of 1997, when nineteen farmers were killed while tending to their crops. On Boxing Day that same year, the stratovolcano’s dome collapsed, causing a massive landslide that pushed part of the airport and the village of St. Patrick’s into the sea. Most residents, including my family members, left the island to rebuild elsewhere in the Caribbean or in the United Kingdom. The crisis has dominated Montserrat’s recent history and caused the population to plummet by two-thirds.

Today, the center of the St. Patrick’s Day festival is Salem, the southernmost village in the island’s intact northern half. Soca and reggae concerts featuring international musicians, such as Kes the Band, who closed the festival on Monday, took place in Salem Park. There was a pub crawl throughout the village’s bars—one of the few Irish traditions that Montserratians accept. Inebriation, the condition that the slaves who rebelled tried to capitalize on, was a daily occurrence during the festival, too. Angela Estwick, the director of policy and planning for the government of Montserrat, delivered the annual St. Patrick’s lecture, on sustainable development, at the cultural center, in Little Bay. The calypsonian and agriculturalist Justin (Hero) Cassell sponsored daily tours to historic sites, including the Montserrat Volcano Observatory and Plymouth, the desolate capital of the island.

The low-lying town center is buried under at least three stories of hardened mud, ash, and boulders. I was only six years old when the volcano erupted, so I do not know the old Montserrat, but two of my cousins who spent their formative years on the island accompanied me on my trips to the evacuated and exclusion zones. We visited Garibaldi Hill, which overlooks Plymouth, and the odor of sulfur lingered in the air. From our vantage point, we tried to identify once-familiar landmarks. My cousins’ childhood home was impossible to locate in the vast sea of gray and overgrown bush. The American University of the Caribbean and its medical campus are in ruins, and the Government House, the war memorial, and the clock tower are buried. Sand mines that have been established by local businessmen dominate the wooded expanse.

To be on Montserrat for the St. Patrick’s Festival is to feel both the vibrant culture of the island and the frustration that so little has been done to redevelop it. I went on a hike with friends throughout Baker Hill and Mungo Hill, where the views of the peaks and valleys were ideal for zip-lining and camping, but no such ecotourism offerings exist. This year, as in 2017, when I last visited the island, I sensed a strong sentiment among many residents that the United Kingdom has not promoted Montserrat’s economic growth. St. Patrick’s Day is a short-term boost for the island’s economy, but it is, of course, only temporary. Montserrat’s land is fertile, yet the island’s only major export is sand deposited from the volcano. In the exclusion zone, two geothermal wells have been completed and tested by engineers; the energy yield is sufficient to power the entire island and also to export, but I was told that the pilot project will end this month. There is healthy debate among locals and the diaspora about whether or not Montserrat should seek independence from the United Kingdom, despite the ever-present threat of the sleeping giant in the south. In 2019, the island is both fragile and full of hope. I think often of the words that the Montserrat playwright and novelist Edgar Nkosi White wrote about how the meaning of St. Patrick’s Day should shift following the volcanic eruptions: “I suggest that for Montserrat St. Patrick’s we just deal with our self and our yet untreated madness. Close the doors and say simply: the Montserrat slaves would like to shut down the Plantation.”

‘Higher Casualty Rates’ to Emerge From US Prisons as Inmates, Guards...