Home Culture Stephen Cheng Released One Single That Sounded Like Nothing Else. But Who... 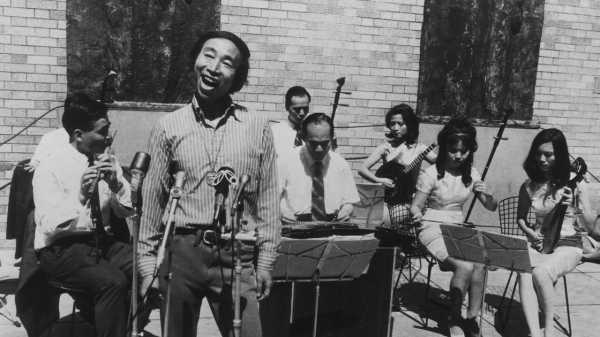 Pop-music history is filled with dreamers who came and went, leaving behind just enough to scramble a latter-day listener’s sense of what was once possible. In 1967, the Jamaican record label Sunshine released a seven-inch single by a man named Stephen Cheng, titled “Always Together (A Chinese Love Song).” The track begins in the loping, offbeat style of rocksteady: a guitar
cranking through a skanking rhythm, the bass slinking up and down

in the background. But things get odd when Cheng starts singing. Most Jamaican rocksteady singers of the time mimicked the cadences of American soul. Cheng
sings in a bold, over-the-top style reminiscent of Chinese opera.

The words he sings are in Mandarin: the lyrics for “Always Together” were adapted from “Girl from Ali Shan,” a folk song that originated in Taiwan, thousands of miles from Jamaica. “Always Together” was obscure even upon its release; eventually, it became a cherished novelty among hard-core Jamaican-music fans. But, for years, the few historians and collectors who knew about it wondered about its provenance. Chinese Jamaicans played a significant role in the island’s rocksteady and reggae scenes, as both performers and producers, but Cheng was an unknown. Where did he come from? And where did he go?

Last year, I joined the curatorial team at New York’s Museum of Chinese in America for “The Moon Represents My Heart,” an exhibit focussed on the role that music has played in Chinese-American life. Our show didn’t have a central story, because there’s no single thing that might credibly be called “Chinese-American music.” Instead, we tried to explore how music brings meaning to our lives, whether we are singing in church or at a karaoke bar; freestyling with friends or dancing at a rave; learning enough chords to make a racket at a club or in the garage. Sometimes the meaning of such experiences doesn’t come into focus until later—the piano lessons you were forced to take as a child morph into a predisposition for synth-pop. Music shapes our identities in ways that, like a forgotten recording artist, can be difficult to trace. Our show’s title came from a 1977 hit by the Taiwanese pop singer Teresa Teng, whose songs about romance and reunion bound people throughout the Chinese diaspora, serving as a beacon for those who would never return home. Naturally, we were drawn to musical stories involving unlikely circuits of encounter. One day, while working on the exhibit, I mentioned Stephen Cheng to one of the museum’s curators, Andrew Rebatta. I played “Always Together” for him, and he was entranced. Within a week, he had tracked down Cheng’s family.

Cheng, we were surprised to learn, was a New Yorker. He had died in 2012 and was survived by five children, who told us that music was a constant part of their upbringing. Their father was born into a well-to-do family in Shanghai, in 1921, and worked as a journalist there after college. In 1948, he moved to Hawaii, where he had family, and then to New York, where he attended Columbia, and later studied singing at Juilliard. He was cast in Broadway shows, including “The World of Suzie Wong” and “Flower Drum Song,” and he recorded an album of Chinese folk songs for New York’s Monitor Records. His summers were spent performing theatre and touring.

Cheng’s children knew most of this growing up. But they had not learned about “Always Together” until recently. In November, 2017, Cheng’s son Pascal discovered it by chance on YouTube—he had listened to some of his father’s other recordings, and the site’s algorithm suggested it to him. The song had been uploaded to YouTube in 2010, around the time the single was reissued by a Japanese record label specializing in Jamaican obscurities. Pascal left comments below the YouTube video and on music blogs, touting his father’s long career and asking if anyone knew about the song’s origins.

After Rebatta, the curator, contacted Cheng’s family, Cheng’s daughter Danielle came by the museum. She brought a collection of files that their father had kept about his musical exploits: news clippings and magazine articles, advertisements of shows in Jamaica and Trinidad, glossy photos of him performing on “The Steve Allen Show” and the Jack Paar show. (He also performed on “The Ed Sullivan Show.”) In some of the photos, Cheng is dressed in a silk robe, marking him as Chinese; in others, he sports the sharp suit or flowy shirt of a nineteen-sixties lounge singer. He wears a broad, blissful smile in nearly all of the pictures.

Cheng saw music as a way of reaching people outside his predominantly Chinese-speaking world. His ability to sing in different languages allowed him to tour throughout the West Indies, catering to communities of Chinese immigrants, and, after a successful string of shows in Suriname, he secured a hotel-lounge gig in Trinidad and Tobago, where he performed a repertoire that included songs in English, French, German, Italian, Spanish, and Chinese. He became a minor star. In the late sixties, he worked with the local government to stage a series of shows as a benefit for the National Stadium of Trinidad, bringing, as he would later write, “the Chinese out of the confines of the strictly Chinese community to work with the other racial groups for the benefit of their whole country.” His fame spread to Jamaica. On a visit sponsored by the Chinese Benevolent Association, he met Byron Lee, a renowned Chinese-Jamaican musician, and they recorded “Always Together.”

Back in New York, in the early seventies, Cheng started a band called the Dragon Seeds. (Byron Lee had a band called the Dragonaires, though it’s likely the similarity is a coincidence.) Among the files that Cheng’s children brought was a draft of a press release that described the Dragon Seeds’ approach to blending Chinese traditional song with a softened version of American rock—“a new Chinese folk rock sound,” minus the “screaming.” Trying to imagine what the Dragon Seeds actually sounded like was dizzying. Reviews described Cheng’s singing as “attractive,” “sensitive,” and “attractively unassuming”; the Times praised his “superior way of reacting to the moods of each song.” The band’s lineup featured twelve musicians playing Chinese instruments, surrounding a four-piece jazz band. They played the Public Theatre and benefits for Chinatown churches. In 1971, they were invited to be part of Jazz in the Garden, a Museum of Modern Art concert series that also included legends of jazz, blues, and Latin music. The program included Elvin Jones, Odetta, Big Mama Thornton, and Mongo Santamaría among the performers. Cheng and the Dragon Seeds was the only act that I had not previously heard of, the only one that hadn’t left an obvious legacy.

Some time after Danielle dropped off the files, she provided a couple of reels of quarter-inch tape, one recorded in Jamaica, presumably with a local band, and the other a live Dragon Seeds set from Town Hall. It seemed possible that the second reel represented the entirety of the Dragon Seeds’ extant recordings.

So much of what we know about immigrant life, even in the not very distant past, is thanks to hoarding and scavenging, rather than the sort of careful personal archiving one sometimes sees among the more powerful and well-to-do. When we were putting together “The Moon Represents My Heart,” we wanted things that could bring shape and texture to the role that music had played in Chinese-American life, and I thought it would be easy to find personal mementos and fan-club membership cards, mixtapes or photos of epic karaoke nights. But, when you don’t see yourself as part of a scene or a movement, you may not think such things need to be saved. Immigrants have not tended to regard their own lives as rising to the status of history. Sometimes they simply don’t have the room or the resources to keep records of their lives.

We converted Cheng’s reels into audio files, but I was hesitant to listen. Lost artifacts are almost always better in the imagination, burnished by hope and yearning. When we pressed play, I was captivated by Cheng’s voice. He croons with a kind of desperate earnestness. There were standards, such as “The Shadow of Your Smile” or “Softly as I Leave You,” that I’d heard hundreds of times before, but never with his amateurish zeal, which soars above his band’s tasteful, jazzy pop. He sings with a slight accent and seems to compensate for it by singing louder, with more passion. There’s a groovy song inspired by the Chinese tale of the “Butterfly Lovers”; he races through English-language lyrics about lovers reuniting in heaven,
accentuating his words with a series of delirious, scat-like trills and the Chinese expression “Ai-ya! Ai-ya!”

The Dragon Seeds fizzled out after a few years, and Cheng redirected much of his energy from performance to teaching. He gave voice lessons at the New School, N.Y.U., the Stella Adler Conservatory, and Sarah Lawrence College. In 1991, he published “The Tao of Voice: A New East-West Approach to Transforming the Singing and Speaking Voice,” a book that tried to fuse ancient Chinese philosophy and breathing practices with Western vocal technique. It wasn’t intended only for aspiring performers: Cheng wanted to help all kinds of people feel confident using their voices, whether to sing or to give presentations at work.

The reels that Cheng’s children brought didn’t contain other rocksteady gems like “Always Together,” though the Dragon Seeds did record
a more traditional version of “Girl from Ali Shan.”

There was also a funky version of another Chinese folk song, “Girls from Daban City.” On all of the tracks, Cheng sounds impossibly hopeful, as though his effervescence can’t be contained, and he can’t help but share it. His performance spans styles and eras: he affects a heavy vibrato croon here and lightly tiptoes through syllables there, occasionally flitting between English and Mandarin. The song I can’t stop listening to is his version of “Yesterday.” The recording begins with a dutiful polish, but soon Cheng breaks free of the cool economy of the Beatles’ original, and begins singing with a kind of operatic gusto. It’s a song about longing and memory, and he’s trying to sing it into tomorrow.

“The Moon Represents My Heart: Music, Memory and Belonging” is on view at the Museum of Chinese in America, in New York, until September 29th.

The New Zealand mosque shooter could be the country’s first person...

Request to Use Military in Libya May Be Submitted to Turkish...