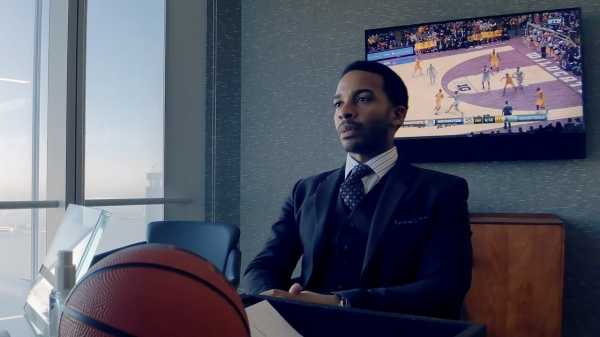 Looming like a rock formation in “High Flying Bird,” the actor Bill Duke plays a South Bronx youth-basketball coach named Spence, whose imposing form and glower give physical shape to his moral eminence. Spence’s code of conduct indicates him as the ethical center of Steven Soderbergh’s Netflix film, or least a righteous obstacle to be scaled by the sports agent Ray Burke (André Holland). “I have a rule on my court,” Spence says, laying down the law to a transgressor. “Anybody who refers to the institution of slavery in front of me, particularly in reference to basketball or its players, must say the words, or they’re banished forever.” The words are, “I love the Lord and all his black people.” When we first see Ray speaking them, after offhandedly referring to Spence’s cracking of the metaphorical whip, he delivers the sentence in a rush of respect, as if hurriedly making the sign of the cross in a confessional.

Soderbergh shot the movie on an iPhone, from a brisk and silky script by Tarell Alvin McCraney, the playwright of “In Moonlight Black Boys Look Blue.” Set during the 2011 N.B.A. lockout, it’s another of Soderbergh’s procedurals about processes, offering an intimate view of a sprawling system; its examination of human nature is mostly confined to a study of men and women tinkering with the structural machines that they operate under. While waiting for labor negotiations to conclude and the season to start, one of Ray’s clients, Erick Scott (Melvin Gregg), has been borrowing money on bad terms, and it’s clear that the usury is business-as-usual exploitation.

Settling a bill, Ray musters a fine show of nonchalance when his corporate credit card is declined. He rolls into his office to learn it’s been frozen, along with his salary, until the lockout ends. A scheme swings into gear without further preamble: Ray, greasing wheels and pulling hidden levers, will end the walkout, and he will do so while an imperceptible half-step ahead of the audience, so that connivance is indistinguishable from desperation. This is not a “Jerry Maguire” saga but a light thriller about a talent agency given weight by its emphasis on personal autonomy.

The film is as preachy as a vintage pinko melodrama of social protest but funny and fleet enough that its didacticism slides by on charm. Ray’s first round of banter with Samantha (Zazie Beetz)—she was his assistant until she made a lateral move amid the belt-tightening—is typical in its friskiness, and also in its twists on conventions of the office drama: it’s a walk-and-talk in which she cannot get a word in edgewise but, nonetheless, it communicates her ambition and her wit. As a tale about power plays, “High Flying Bird” is her story as a much as anyone’s: What makes Samantha run? Meanwhile, the visual scheme has a playful blatancy. Ray and other big players—a team owner whose insincere smile is the face of insipid corporatism (Kyle MacLachlan), a players’-association representative with steel in her gut and liquor on her breath (Sonja Sohn)—meet in office towers and power restaurants: glass boxes filled with invisible money and frictionless modernism. But Ray’s apartment is in a stone row house, and Spence’s court has the look of the windowless citadel.

In the first scene of “High Flying Bird,” Ray gives Erick a book, advertised as a Bible, and tells him that he’ll know when the time is right to open to it. He does so in the film’s final minute, when the object is revealed as an intriguing cousin of a MacGuffin, or a presence that corroborates the film’s themes—among them, that it’s counterproductive to skirt talk of subjugation when discussing professional sports. I like the idea of pairing “High Flying Bird” with “The Girlfriend Experience,” Soderbergh’s 2009 film about a sex worker living through the 2008 financial crises, for a critique-of-capitalism double feature about commodified bodies. In each case, the filmmaking is highly economical, and the economic analysis deeply pleasing.

Manchester United to establish women’s team: All you need to know

US, Russia Likely to Go to Mars Together, Former NASA Astronaut...