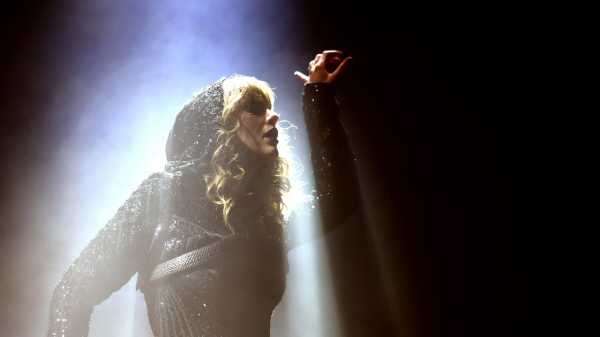 Last summer, the pop singer Taylor Swift began a stadium tour in support of her sixth LP, “Reputation.” It was a wildly successful jaunt, and, on its final night, in Arlington, Texas, more than a hundred thousand people filled A.T. & T. Stadium to watch Swift perform. The two-hour show was filmed for a Netflix special and released on New Year’s Eve. If it’s been a while since you witnessed that many human beings gripped by what appears to be complete and utter joy, “Taylor Swift: The Reputation Concert Tour” is a quick fix. Swift’s fans—beaming, sobbing, gasping in a kind of deranged ecstasy—receive her desperately and gratefully. Even through a screen, the heady, collective love is palpable.

Swift first appears onstage wearing dark lipstick, lace-up knee-high boots, and a hooded, sequinned black leotard. While she isn’t the most instinctive dancer, Swift is practiced and spirited, and she has surrounded herself with a crew of world-class athletes. Their routines are elaborate and inventive. Swift is constantly accenting her lyrics with physical flourishes (eye rolls, jazz hands, hair flips), all of which seem intensely pre-plotted; the relentlessness of her choreography allows us to briefly imagine a universe in which nothing plain ever happens and no moment is unproductive. Her tours have always felt more like elaborate theatrical productions than concerts, in part because Swift is not the sort of artist who is prone to spontaneity. Her limbs snap dutifully into formation, over and over. Pop music isn’t exactly predicated on bold expressions of authenticity—there is no reason why, in 2019, any grown person should be griping about the relative “realness” of pop stars—and stadium tours are always tirelessly rehearsed. Still, I winced when Swift and her backing dancers looked at each other and heartily fake-laughed in the middle of “This Is Why We Can’t Have Nice Things.” Truly, I winced so hard.

Swift was an early adopter of the faux-intimacy afforded by social media, and she has mastered, if not pioneered, its weird, chummy cadences (“You guys!”). She is terrifyingly expert at addressing millions of strangers as if each were a cherished and familiar confidante. It’s easy to be cynical about this way of communicating, which favors a kind of dopey, manipulative warmth. In my darker moments, I fear that it portends some kind of societal collapse, in which we are all seduced into complacency by robots giddily announcing, “You guys!” It is more likely that this is simply what happens when powerful women are expected to be both sweet and savvy, nurturers and entrepreneurs—eventually the line between the two fades, and friendliness and salesmanship become inextricable.

The narrative premise of “Reputation,” both the album and the show, is Swift either shrugging off the gossip and innuendo that has followed her for much of her career or leaning deeper into it. (The latter is represented by a large cobra motif.) But Swift never quite manages the snarling belligerence of Joan Jett, whose “Bad Reputation,” from 1980, remains the definitive text on not giving a shit: “And I don't really care if you think I'm strange / I ain’t gonna change,” Jett promises.

Swift cares a lot, even when she’s strutting and flipping her hair. To be fair, she has been subject to plenty of sexist belly-aching—what might read as ambitious or confident in her male counterparts is derided, in Swift, as shrewd, conniving, callous. But the fact remains that she’s not exactly enduring endless, seething comparisons to Pol Pot, which sometimes makes her boundless self-pity feel odd. “Reputation” is a resurrection story—there is even a film-within-a-film that figures Swift as a kind of gossamer phoenix, overcoming persecution to stand and love again!—but it’s hard to know what Swift is rising above, exactly, beyond some moderate embarrassment and the usual celebrity hounding. A montage at the start of the film features inane chatter from entertainment hosts and radio d.j.s—the sort of idle, trivial taunting that every superstar contends with. The worst thing anyone says about her is, “All this drama is exhausting.”

But drama is, of course, the pop star’s stock-in-trade. Swift has always been proud of the extent to which she transparently mines her own life for lyrical fodder. The songs on “Reputation” toggle between tender and boastful, as Swift recounts various professional and romantic entanglements. “I Did Something Bad” revels in the (satisfying) idea of being a jerk to a jerk (“If a man talks shit / Then I owe him nothing”) but nonetheless contains moments of real vulnerability—like when, on the second verse, she offers the deeply sad advice, “You gotta leave before you get left.”

One of the gentler moments of the film is Swift’s performance of “All Too Well,” from the album “Red,” from 2012. The song was never a proper single, yet it’s one of Swift’s most beloved ballads, and she plays it solo, on an acoustic guitar. The song is about being haunted by memories of a bungled love, maybe for a little longer than you should be. “I know it’s long gone / And that magic’s not here no more/ And I might be O.K. / But I’m not fine at all,” she admits—so go the scars of love. What’s most striking about “All Too Well” is how Swift validates and reaffirms her experience; when a complicated relationship ends, it’s easy to feel bewildered and betrayed, unsure of everything that happened prior to the moment of collapse. Were you swindled? Or, worse, did you somehow invent the whole thing? Swift’s repeated assertion—“I was there”—begins to feel like a kind of corrective to whatever unkind maneuvering her ex (in this case, the actor Jake Gyllenhaal, according to Swift lore) was up to. Though later in her career she would become more brash about broadcasting her own empowerment, “All Too Well” might be Swift’s most quietly feminist moment.

The show ends with a medley of “We Are Never Getting Back Together” and “This Is Why We Can’t Have Nice Things,” two buoyant singles about holding your ground. It’s worth sticking around through the closing credits, both to watch the stadium empty out—enterprising fans stuff their bags with scraps of confetti or “Reputation”-themed newsprint from the floor—and to watch a few minutes of backstage footage, in which a surely exhausted Swift and her dancers climb into golf carts and zoom off.

The critic Jon Caramanica, writing in the Times, recently argued that pop music—which he defines as songs that strive for “gloss, pep, ecstasy, spectacle”—has faded as a dominant cultural force. “Pop, the genre, is no longer pop,” he writes. Instead, pop music has been replaced on the charts by hip-hop and more niche or global sounds (which are usually inspired, in one way or another, by hip-hop). This shift was surely quickened by what Caramanica refers to as “the largely frictionless Internet,” which makes it easy for listeners to acquire precisely what they want and nothing else, and for smaller or regional genres to spread quickly. Pop, as a sound, has always been guileless and optimistic; these days, chart-topping songs tend to be morose, melancholy, and angry. The massive pop stars of yesteryear—Katy Perry, Justin Timberlake—are fading from the public consciousness. Their work seems corny and off-center now. In that context, “Taylor Swift: The Reputation Concert Tour” will soon either be regarded as a museum piece or as a testament to Swift’s era-defying longevity. I suspect it will be the latter.

Chasing Captain America: why superhumans may not be that far away

Solskjaer looks forward but was unnerved by aspects of draw at...