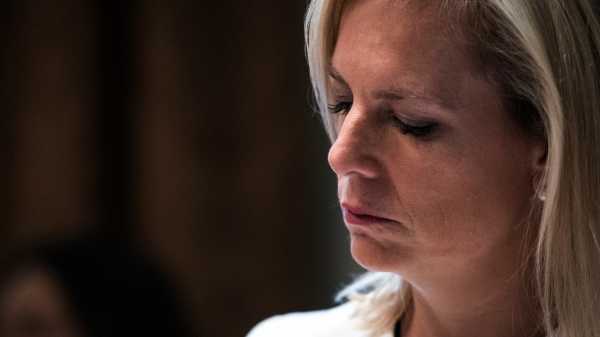 In September of 2016, in the run-up to the Presidential election, Marco Gutierrez, a founder of the online activist group Latinos for Trump, appeared on MSNBC to discuss what he saw as a looming immigration threat at America’s southern border. “My culture is a very dominant culture,” Gutierrez, who was born in Mexico, said. “And it’s imposing and it’s causing problems. If you don’t do something about it, you’re going to have taco trucks on every corner.” Gutierrez meant this as a warning, a dire vision of what the future would look like were Donald Trump to fail in his Presidential bid. But Hillary Clinton’s supporters quickly reclaimed the idea as a welcome, and appetizing, possibility. At a campaign stop, Clinton said, “I personally think a taco truck on every corner sounds absolutely delicious.”

Last year, C.H.D. Expert, a hospitality-industry analysis firm, identified Mexican restaurants as the second most popular kind of dining establishment in the nation, and estimated that they make up about nine per cent of the half million or so restaurants in the United States—more than the total number of pizzerias. Countless additional restaurants bear signs of Mexico’s culinary influence: you can find fajitas at Chili’s, guacamole and chips at the Cheesecake Factory, churros at Disney World, quesadillas repurposed into burger buns at Applebee’s, margaritas at LongHorn Steakhouse, Baja-style fish tacos at hipster brunch spots, and nachos at every sports arena in America. Even the ubiquitous Caesar salad is Mexican—it was invented at a restaurant in Tijuana. In many respects, you might say, Mexican food is American food.

So it may have been pure statistical inevitability that caused Kirstjen Nielsen, the Secretary of Homeland Security, to eat at a Mexican restaurant this week, in the midst of the nightmarish crisis at the border caused by the Trump Administration’s family-separation policy. On Wednesday evening, Nielsen arrived at MXDC Cocina Mexicana, a restaurant in Washington, D.C., that promises “classic Mexican cuisine with a modern touch.” It seemed almost unbelievable, on the day we heard a wrenching audio recording of migrant children crying out for their parents, that Nielsen, the chief enforcer of the Administration’s immigration policy, could be out in the world having dinner in a neighborhood restaurant like a normal person, let alone enjoying food from the very region the policy targets. As Nielsen and a dining companion sat in the restaurant for what a D.H.S. spokesperson later described as a “work dinner,” she was recognized by a patron at a nearby table, who covertly snapped a photograph, and sent it to friends in the hopes of inspiring a protest.

In short order, a cadre of demonstrators from the D.C. branch of the Democratic Socialists of America filed into the restaurant and stood between the tables adjacent to Nielsen’s. “How can you enjoy a Mexican dinner as you’re deporting and imprisoning tens of thousands of people who come here seeking asylum?” one shouted, before leading the crowd in a rumbling chant of “Shame! Shame!” “In a Mexican restaurant, of all places,” another cried. “The fucking gall!” In the blurry darkness of a video from inside the restaurant, posted to Facebook Live, Nielsen and her dining companion appear to be sharing an order of guacamole. The protest went on for more than twenty minutes, while Nielsen—shielded by two Secret Service agents—kept her head ducked low.

Some observers suggested that Nielsen’s decision to dine at a Mexican restaurant seemed like an intentional provocation, a trollish act consistent with the ethos of spite and petulance that guides much of what happens inside the Trump Administration. (See, too: Melania Trump’s Zara jacket, or Ivanka Trump’s smiling Instagram of her son.) This suspicion was compounded when, the day after Nielsen’s meal, it was revealed that Stephen Miller—the senior White House adviser responsible for the Trump Administration’s “zero-tolerance” immigration policy—had dined on Sunday night at Espita Mezcaleria, a buzzy Mexican spot in Washington’s hip Shaw neighborhood that, according to The Washingtonian, serves the best chips and salsa in town. (The New York Post reported that a customer at the restaurant, spotting Miller, cried out, “Whoever thought we’d be in a restaurant with a real-life fascist begging [for] money for new cages?”) In the midst of the Presidential campaign, which he kicked off by asserting that Mexican immigrants are rapists, Donald Trump celebrated Cinco de Mayo by tweeting a photo that showed him grinning and giving the thumbs-up in front of a tortilla bowl, with the caption “I love Hispanics!” Perhaps Miller, known for his smug embrace of xenophobic politics, was making a similarly sneering gesture.

A Crisis at the Border

More coverage of the Trump Administration’s immigration policy from The New Yorker.

MXDC is a slick, anodyne restaurant, one of a half-dozen or so East Coast establishments affiliated with the celebrity chef Todd English, who rose to fame in the nineties making Italian food in Boston. Neither English nor the restaurant’s owner, nor the bulk of its clientele, is Latino, but—as is true of so many restaurants in America—most of the staff is. Indeed, Nielsen and Miller would have been hard-pressed to find any restaurant, serving any kind of food, that didn’t rely on the labor of the same individuals their immigration policies seek to expel at all costs. Latino workers are the backbone of the restaurant world, at bistros, pizzerias, sushi counters, and rotisseries across the country—many of them are Central American, like the majority of the migrant families being torn apart in recent weeks. (And, it’s worth noting, many of those workers are undocumented: the hospitality sector is one of the largest employers of undocumented labor in the country.)

To many people—the protesters and hecklers, the demonstrators gathered in front of ICE and D.H.S. offices across the country during the past week, the horrified parents watching the news and holding their children close—it seems impossible that Nielsen and Miller could miss the through line that connects this Administration’s cruel, dehumanizing policies toward Latino migrants and the real lives of Latino people who already live and work in this country. It seems as if it would require high-wire moral acrobatics, Jedi-level compartmentalization, to enjoy the fruits of Latin American culture, and labor, at this time. But for many other Americans, including those leading our government, there is a simple, reflexive disconnect between cultural product and cultural producer, between policy and people. “Everyone hates Mexicans, but everyone at the same time loves Mexican food,” the Mexican-American writer Gustavo Arellano told the Huffington Post, in 2016. “When they’re eating it, they’re able to disassociate it from the people who made it, or who picked it or slaughtered those cows.” Shortly after Marco Gutierrez issued his taco-truck warning, a Bay Area online magazine asked him what sort of food establishment he would be happy to see on every American corner. “Uhh . . . Probably taco trucks,” he said. “What?!” the interviewer responded. “Yeah,” he conceded. “Taco trucks are fine with me.

Jack Davison’s Throwback to a Golden Age of Editorial Portraiture |

Buried Ammo Explodes in Russia’s Udmurt Republic Due to Grassfires –...

Son calls himself the ‘happiest guy in the world’ after making...