Home Culture The Agreeable Staginess of “State of the Union” | 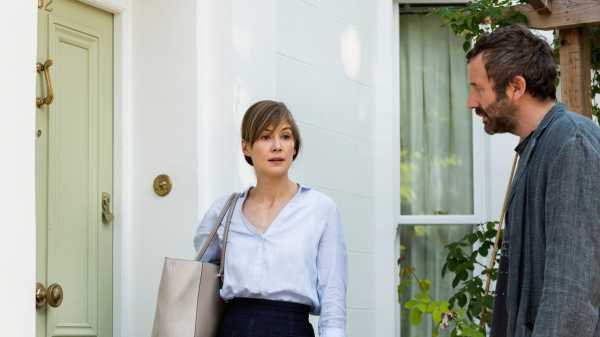 Each brief episode of “State of the Union” (Sundance TV) covers about ten minutes of the marital strife defining the personal lives of a fortysomething couple in London. Louise (Rosamund Pike) is a medical doctor. Tom (Chris O’Dowd) is an unemployed music critic. Each week, just before their couples-counselling session, they convene at a pleasant pub in an antiseptic corner of Hammersmith, just opposite their therapist’s door. “We are in a permanent marital crisis,” Louise says, at the season’s happy ending.

The creator, Nick Hornby, and the director, Stephen Frears, have created something that, in its agreeable staginess, looks back seventy years to drama anthologies like “The Philco Television Playhouse” and “Playhouse 90”—golden-age telecasts that put ace writers (Horton Foote, Paddy Chayefsky) to work on good chewy middlebrow scenarios. All of the “action”—Tom’s moving out of the family home, their sparking up the defibrillator paddles of makeup sex—happens offscreen. When Tom and Louise construct narratives of their problems and mess around in the meaning of them, there’s a light touch of Beckett in their double-act repartee. “Have you noticed how we only even seem to be able to talk about the last four seconds?” Louise says. “We start talking, and then somebody says the wrong thing, and then we spend the rest of the time talking about the wrong thing somebody said.” On this verbal surface, ten minutes is plenty of time for a fond frivolous moment, shining with the hope of reconciliation, to collapse like a rotten floorboard.

An instance of lust precipitated their current crisis. “You slept with someone else, and now here we are,” says Tom. “Except there’s a bit more to it than that, isn’t there?” Louise replies. Yes—a whole constellation of specific and philosophical complaints about sex, love, partnership, and the difficulties of mating for life. “State of the Union” can be a bit self-conscious about its ideas and blatant with its metaphors. Tom—whose cultural references and aesthetic preferences mark him out as a well-curated boy of the “High Fidelity” school—quickly name-checks Kant, later invokes Newton’s laws of motion, and compares their chatter to Bergman’s “Scenes from a Marriage.” The couple argue, ridiculously, when comparing their potential divorce to Brexit. It’s a little labored—but the argument itself, its spirals of talk and Sisyphean seesaws of power, is meaningful in its dynamics.

This is, clearly, not a Cassavetes psychodrama of visceral anguish and animal revenge. “State of the Union” is more realist than romantic about marriage, but it’s fundamentally optimistic. (One of Tom’s cherished texts is “The Lady Eve,” a classic Preston Sturges comedy of remarriage.) The narrowness of the show helps it wear its drawing-room lightness well, and it is littered with tiny delights. Admire, in the first episode, the aerodynamic way Tom flings his newspaper away when bolting from the therapist’s door in fear. Watch how Louise staggers off from a moment of social embarrassment, as if she had thwacked herself in the head with a cartoon rake. I’d be fascinated to revisit Tom and Louise from time to time, like the subjects of “Seven Up” or “Before Sunrise,” to watch them pick at each other’s onion skins of feeling.

A leading Holocaust historian just seriously compared the US to Nazi...