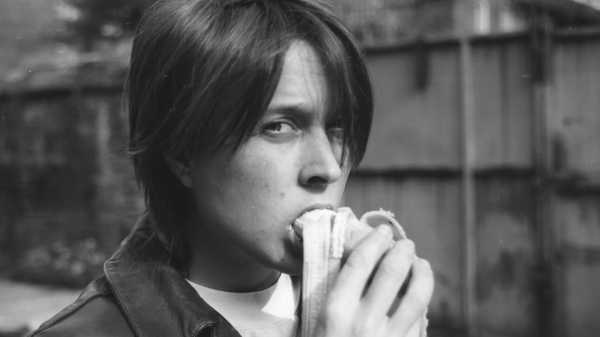 In 1992, Sarah Lucas and Tracey Emin, two young British artists who emerged from Goldsmiths College, in the late eighties, decided that, in lieu of having a studio, they would open a shop together—a place to make art, sell it, and socialize, all within one storefront. The Shop, a former doctor’s surgery clinic on the rundown Bethnal Green Road in East London, was a prime locus of the then-nascent Shoreditch arts scene, where collectors and artists and in-the-know onlookers gathered and partied. As well as operating during regular business hours, it stayed open from Saturday evening all the way through Sunday afternoon. Like Warhol’s Factory, or Malcolm McLaren and Vivienne Westwood’s store Seditionaries, it remains in memory the kind of place that more people claim to have visited than possibly could have done so during its six short months of existence. 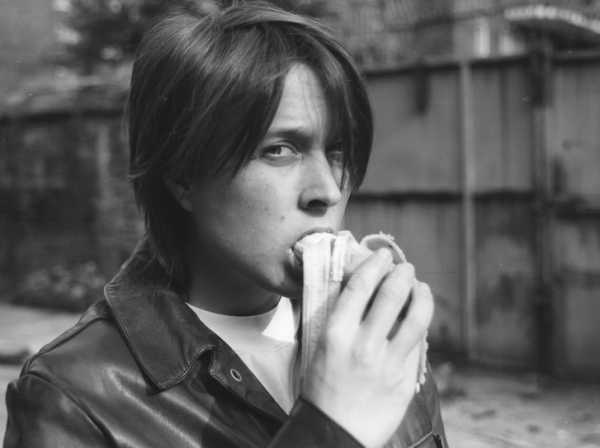 The stock consisted of work that Lucas and Emin made, much of it fashioned from materials they found at the nearby Brick Lane Market and sold at disposable prices. There were ribbons with phrases written on them, like “Help Me” and “So Boring,” to be pinned inside a jacket. (“When you were out and got trapped in a difficult conversation you could flash the label to a friend to get help,” Emin later explained. They cost fifty pence each—less than a dollar.) There were ashtrays that had on their bottoms an image of Damien Hirst, another of the Goldsmiths generation who was making a rapid ascent in the art world, so that a smoker could stub her cigarette out on his face. They sold T-shirts on which they wrote slogans like “Have you wanked over me yet?” and “Complete Arsehole,” the latter of which was printed on the shirt’s front and back, to indicate, Emin has explained, that the wearer was “an arsehole all the way through.” 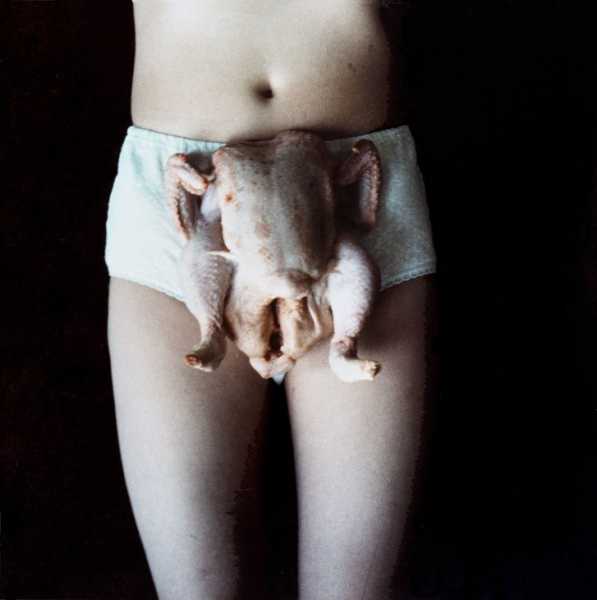 “Complete Arsehole” is also the title of Lucas’s collection of self-portraits, included in her first solo retrospective, which opens this month, at the New Museum. (A book, from Phaidon, comes out on September 21st.) One of the images, from 1993, shows Lucas shot from behind, from neck to thigh, naked below the waist and wearing the T-shirt that gives the collection its name. Like much of her work, the portrait is simultaneously outrageous, comical, and touching: the human body exposed in its effortful swagger and its innate vulnerability. Lucas’s figure is slim-hipped and might be called boyish were it not for the wispy pubic hair and the shadow of vulva just visible between her legs. Her rounded shoulders, with her arms folded in front of her, bespeak a combination of abjection and defiance: an unsparing portrait of the artist as a young woman. 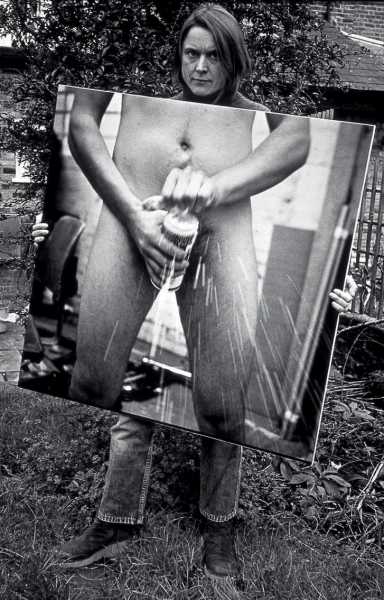 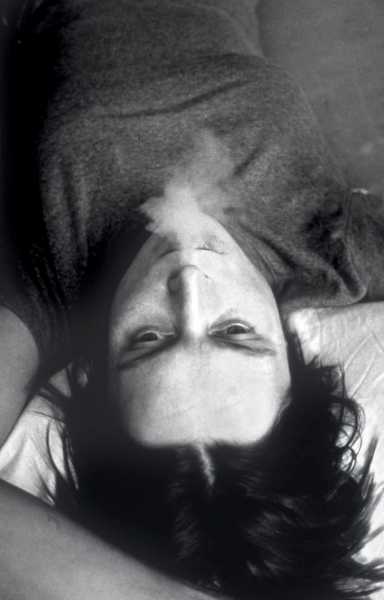 Since her emergence in the late eighties and early nineties, Lucas has fashioned unforgettable representations of the body from unlikely objects. Her best-known work, “Au Naturel,” from 1993, consists of a stained mattress slouching against the wall and occupied by two human figures reduced to abstractions of their genitals: a pair of melons and a water bucket on one side, an upstanding cucumber nestled between two oranges on the other. (It bears a family relation to Emin’s more discursive mattress-based work, “My Bed,” from 1998.) Lucas’s self-portraits similarly draw upon the animal and the edible to reveal not only dimensions of her interior life but also the exterior pressures placed upon it by virtue of her gender. In “Chicken Knickers,” from 1997, a supermarket carcass ready for roasting is affixed to the front of a pair of high-waisted white underpants that Lucas is wearing. Its cavity stands in for female genitals, while its splayed wings and legs suggest to disturbing effect the naked female body in its most reduced, sexualized incarnation. 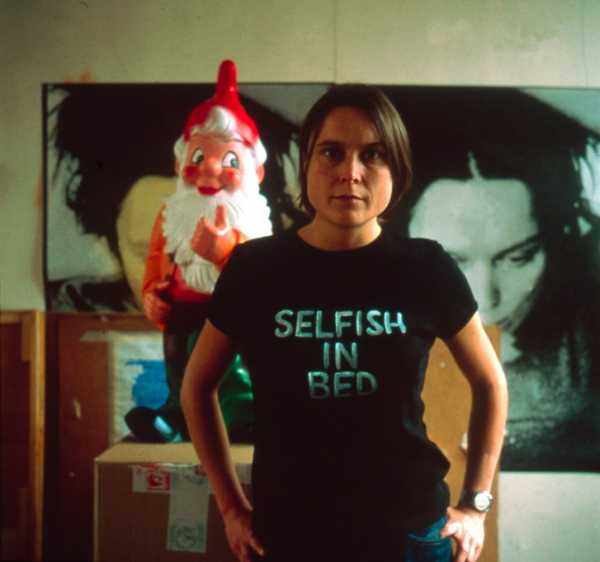 With her lank brown hair, high cheekbones, strong jaw, and the crease of a frown carved into her forehead from an early age, Lucas is a striking presence in these images. She is commanding and sober-seeming, even when her environs offer a subversive note of humor, such as “Got a Salmon On,” in which she holds a large fish over one shoulder as if it were a rifle at ease; or “Self Portrait with Knickers,” in which, dressed in jeans and leather jacket, she stands, hands on hips, in a garden, while on a washing line in the background, pairs of white underpants hang like the nodding heads of orchids. Her earliest self-image, “Self Portrait with Banana,” from 1990, shows her in a leather jacket and a T-shirt, her hair falling over one eye while she stares assertively into the camera with the other, a banana in her mouth. The phallic connotations of the fruit would be obvious even if Lucas hadn’t gone on to make numerous works that included representations of the penis, variously rendered in fruit, or mesh, or wood, or plaster, or concrete. 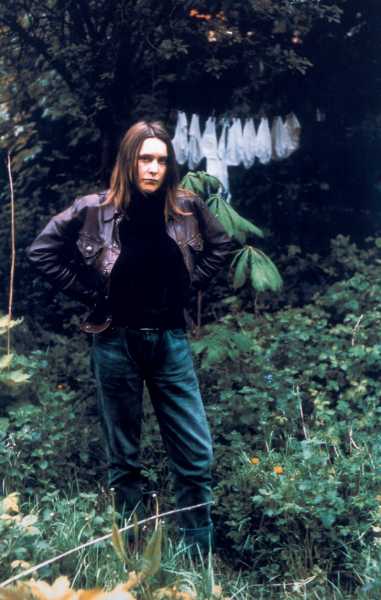 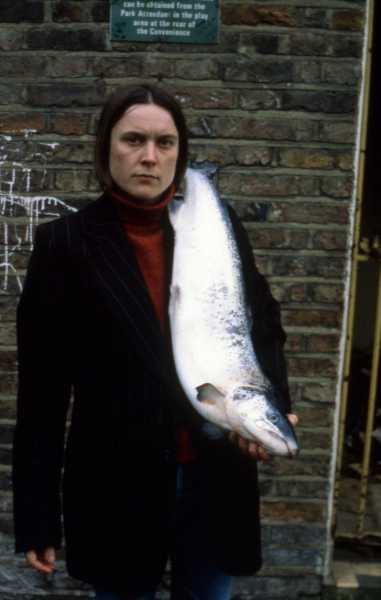 None of the self-portraits were actually shot by Lucas herself: they were most often made with a friend or a lover. In those that show her face, the arresting quality of her gaze feels mediated through this unacknowledged partner. In the image “Self Portrait with Fried Eggs,” from 1996, Lucas sits in an armchair, dressed in a T-shirt, ripped jeans, and chunky shoes. Her legs are spread with the kind of nonchalant comfort usually only claimed by men, and her aspect is on the borderline where, for a woman, an air of confidence can be misread as an incitement to confrontation. Laid on her chest are two fried eggs, resembling cartoonish breasts, which undermine the self-assurance of her posture with surreal comedy and serve as a reminder of the ways in which women’s bodies are so often offered up for others’ consumption. The work, like so much of Lucas’s bawdy, witty work, is ironically self-deflating, but nonetheless riven with a sense of purpose. Eat or be eaten? Why not do both? 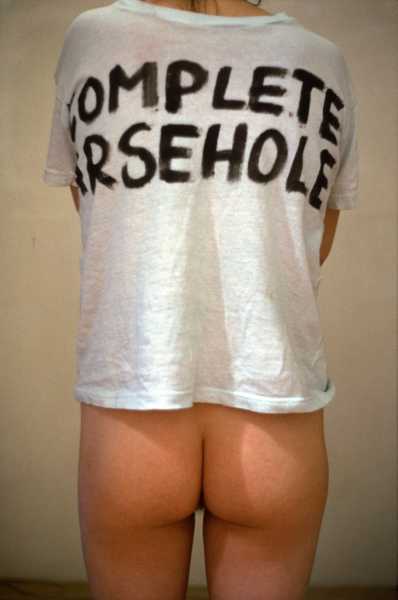 Genetics has learned a ton — mostly about white people. That’s...