Home Culture The Art and Politics of Crosswords | 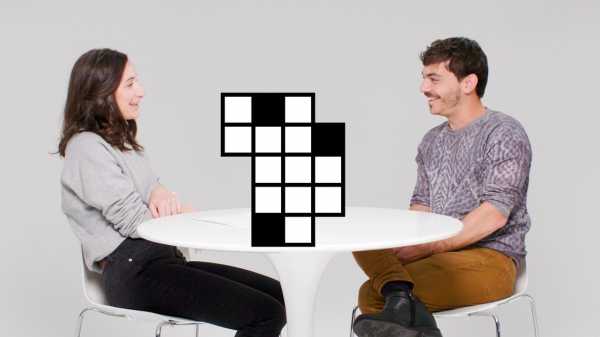 The crossword constructor Natan Last talks about how he approaches the grid.

In “From Square One,” a literary meditation on crossword puzzles, the writer Dean Olsher describes the practice of solving them as “a habit, like smoking.” In myself I see it more bluntly: it’s an addiction (also like smoking). I couldn’t stop even if I wanted to, so it’s fortunate that I don’t. The gridded expanse of black and white soothes and thrills me. I crave the velvet dissociation of turning off my usual cognitive Abstract Expressionism in favor of the specific rhythmic mental state of solving: building momentum and settling into the satisfying intellectual cycle of clue and solve, clue and solve. When a text alert from the Times arrives on my phone each evening, informing me that tomorrow’s crossword puzzle is ready to play online, I am helpless in its face. I’ve paused TV shows, ended phone calls, sneaked away from family dinners, barricaded myself in night-club bathrooms, and even (shamefully, shamelessly) remained in polite company while pretending that I was buried in my phone owing to an urgent work-related e-mail exchange. The puzzle is here, so the puzzle must be done. When I reëmerge, four to eleven minutes later, my head is clear and my heart is calm.

Surveying my recent life in crosswords—the apps and printouts, the modest stacks of puzzle books, the grids in the backs of magazines and in the op-ed sections of printed newspapers—I would estimate, conservatively, that in my five or so years of relentless puzzle-solving I’ve cranked through some three thousand or four thousand puzzles, averaging about two a day, but sometimes spending hours bingeing on a dozen or more in a row. There’s the Times’, of course, and the New Yorker’s—with the hardest puzzles released on Mondays and medium-challenging ones on Fridays—plus the Wall Street Journal’s and the American Values Club Crossword and New York’s, plus the cryptics in The Nation and the Guardian. In my ravenous puzzle consumption, I’ve inevitably developed tastes and preferences. I prefer vocabulary to trivia, I love visual jokes, and I live and die for twisty, punning clues that require their own decoding.

Grumbling about a displeasing puzzle, like yelling at the ref from the bleacher seats or critiquing celebrity ball gowns at the Oscars, is, for a solver, all part of the fun. We may complain about a corner being blocked by some obscure Founding Father, or note an overreliance on “Brian Eno” or “nene” (the state bird of Hawaii). I despair at obscenely specific proper names, groan at clues that make reference to other clues without a clever payoff, and (worst of all) sigh with abyssal disappointment at grids that waste their longest words, those that fill the full fifteen-space span—effectively the puzzle’s pièce de résistance—on the inelegant or the uninteresting. Why would you ever devote that full row or column to phrases as pedestrian and beige as REAL-ESTATE AGENT or EXPRESS DELIVERY when you could let your solvers luxuriate in the golden sunshine of HALLUCINOGENICS or NO, I’M A FRAYED KNOT?

And, just like solvers, crossword-puzzle creators have their own pet peeves and favorite moves. In this video, Liz Maynes-Aminzade, an editor of The New Yorker’s crossword puzzles, talks with one of my very favorite crossword constructors, Natan Last, about how he approaches the grid. Even the simplest one is the result of a lot of acrobatic thought. The grid can be a tool to popularize phrases, ideas, and names; the clues can be little narratives unto themselves. Last delights in cleverly positioning related (or wittily unrelated) words near one another in the grid; he finds musicality in a well-written clue. “It sounds like you would say puzzle-making is a form of art,” Maynes-Aminzade says to Last. He nods along: “Yeah, I’ll say it.”

New poll shows that Republicans have become the party of #MeToo...