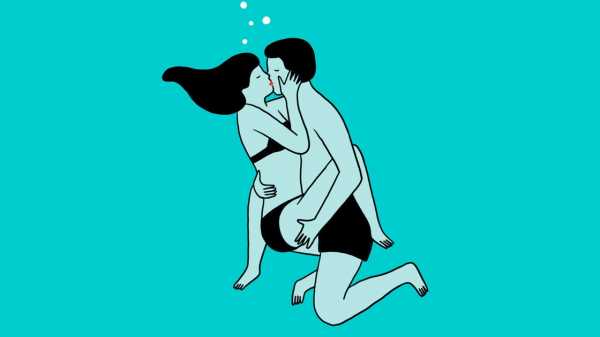 Not long ago, my co-worker Josh Rothman and I each listened to several hours of audio erotica—a broad swath of podcasts and such—as research for a proposed story about “sexy self-care.” Erotic podcasts, like many genres of podcast, have been booming in recent years, and, in theory, it was a fun story idea. Josh likes radio shows and romance novels; I like podcasts and all kinds of frothy things. But in practice it was a bad scene. When we compared notes, we discovered that we’d had the same reaction to what we’d heard: recoiling. The reason was simple. Good erotica is hard to write; graceful and convincing audio drama is hard to produce; and the awkwardness of flawed attempts at both is excruciating. Think of the wrong-note sex scenes you’ve read in books, or in those bad-sex-writing awards that come out every year, or in excerpts from embarrassing novels by disgraced public figures. Reading them silently, you might chuckle and wince. Now imagine a stranger’s voice unctuously reading them right into your ears. The only appropriate response is heebie-jeebies.

But there was a startling exception—one source of audio smut didn’t make us recoil, and a great deal of money and strategy had been invested in insuring that we didn’t. Dipsea, an app founded in 2018 by Gina Gutierrez and Faye Keegan, is a subscription-based purveyor of original erotic short stories, designed with women in mind, with a hot yet tasteful aesthetic. It somehow manages to avoid the common pitfalls of both erotica and audio drama. The writing is respectable, by erotica standards, and the stories are performed by believable, likable actors. The whole enterprise has a startup vibe—erotica with V.C. money behind it ($5.5 million, in fact)—and it feels like a Quip or a Headspace or a Casper, a cleverly designed something you could imagine being pitched to you on Instagram, aiming to revolutionize a solvable realm of your life. The elegance of Dipsea’s marketing, the thoughtfulness of its visual design, the slightly abstracted illustrations of bodies of different colors, sizes, and genders, and the tastefully intriguing story titles are so on the nose, Zeitgeist-wise, that it’s almost unnerving. And its content is just what the marketing suggests: tasteful erotic scenarios that play out among young, educated, sexually and ethnically diverse urbanites, sometimes on vacation in Tulum or at a ski resort (“First time fucking in a gondola—check!”), sometimes in town, after a run-in with an old crush in an Uber Pool. (“He kind of smells like a luxury candle I’d buy at Barneys and then return out of guilt,” the narrator says.) Each story is tagged with dramatis personae indicators, such as “her+him,” “her+her,” and “her+him+them”; scenario indicators, such as “adventurous,” “hookup,” “blindfold,” and “nostalgic”; and hotness-flame ratings, as voted upon by listeners.

The creators seem to have thought of everything, with care, including contemporary sensibilities. If you’ve perused the smuttier written realms, you know how rare that is. Sexual content, from literary fiction to romance novels to nonfiction milestones (“The Joy of Sex,” et al.), often reflects cultural shortcomings as much as it reflects healthy sexual desire. The first dirty book I read, Nancy Friday’s 1973 women’s-true-fantasies classic “My Secret Garden,” was full of scenes involving garden-party hanky-panky and other delights—but also scenarios that ranged from the racist to the perhaps-not-one’s-bag to the horrible, involving incest, rape, teen-age boys, and dogs. (A truly staggering preponderance of dogs.) And all kinds of written sexual content, whether by Updike or Nin or an enthusiastic amateur, often involves some amount of reading around unsavory couplings, phrases, and perspectives (self-delusion among them), which can require elaborate mental gymnastics. I avoided the “Fifty Shades of Grey” franchise not because I wasn’t game for a bunch of dirty books but because I knew that, by my standards, the ratio of fun (sex, romance) to unfun (wealthy tycoon, helicopters, girlish naïveté) would render the whole thing pointless.

Dipsea avoids such melodrama so thoroughly that it seems to have created a genre of its own, with audio details that enhance a sense of pleasure, safety, and calm. The first story I listened to, a short two-part piece called “Chiara,” about a woman vacationing in rural Italy, begins with birdsong and the subtle sounds of a bike riding along a dirt road. A young woman’s voice, confident and relaxed, describes the afternoon heat and her desire to try her villa’s outdoor shower. She sounds present, non-creepy; she avoids the pitfalls of over-obvious self-description; when a young Italian man named Lucio arrives to fix the shower, she appraises him respectfully, admiring his shyness. Her narration doesn’t use an “Ooh—sex is around the corner!” tone. Their flirtation, and their subsequent shower-focussed sexual encounter, is playful, tender. The language is straightforward; she says “dick” and “ass” but avoids the genre’s more regrettable nouns and verbs. You hear realistic, non-gross sex noises—the depressing yips and “Oh, yeah”s of porn are almost entirely absent on Dipsea. They conclude their encounter to mutual satisfaction and a lack of weirdness; later, they glimpse each other in town, and it’s pleasant, a little mysterious. They might do it again, and let’s hope that they do—who knows?

Many of Dipsea’s stories end abruptly—post-satisfaction, pre-afterglow—as if to indicate that all that narrative care was meant to get us where we needed to be for believable sex to happen. Once it’s accomplished, we can roll over, man-style, and go to sleep. The narrative is the hard work, and, assuming you can clear the hurdle of the app’s demographic hyperspecificity, Dipsea stories generally achieve a surprisingly natural union of fantasy and reality. The yoga-studio series, in which a young woman is turned on by her commanding, intriguing instructor, a former marine, manages, via a snowstorm, a near-cancelled class, and a bit of dignity, a magnificently non-skeezy transition between yoga instruction and fucking. In another chapter, we hear the yoga instructor’s perspective, and he’s just as excited and vulnerable as the female narrator. (The straight men tend to be confident and rugged but sensitive enough to stop short of bro-ish.) We hear him talking to a bilingual male friend who encourages his relationship and also makes fun of his Spanish. There’s light conversational humor in many stories, reasonably close to jokes your friends might make. (“I’m stuck here forever?” a woman in another story says to her partner, who embraces her as they horse around. “Yeah, this is your Fyre Festival,” he says.) All of these details seem to suggest, as most of the app’s content does, that we’re in a realm of decent, appealing people and a world full of sexual possibility.

Narrative balance and a well-imagined scenario can be hard to achieve in fantasy, even for oneself. The comedian Jen Kirkman, on her 2007 album “Self Help,” articulates this in a bit called “Underdeveloped Sexual Fantasies.” In sexual fantasizing, “Guys need a visual,” she says. “Women don’t need that. I need a story.” But if the story doesn’t work, she says, she gets confused and falls asleep. She tries fantasizing about a sexy movie star, but she can’t just think about him “in some friggin’ vacuum that makes no sense”—How did she meet him? Why is he interested in her? “I thought he was married. Is he still married? Because I don’t want to be an adulterer,” she goes on. “I thought he lived in France. Is he visiting? Am I going to France?” For many of us, especially women, perhaps, narrative is strangely crucial, whether romantic or sexual or both, and offers pleasures of its own. This week, when I opened Dipsea, I was excited to discover that there was a fourth chapter for the vinyasa couple. They were going on a yoga retreat, and I wanted to know what happened.

Trump again boosts a baseless conspiracy theory, this one about Jeffrey...