Home Culture The Beauty and Burden of Being a Nigerian Bride | 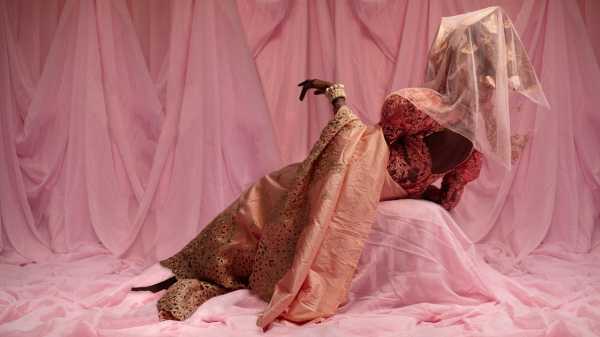 There are millions of pictures of Nigerian brides on Instagram, many of them taken by talented artists who work as wedding photographers on the weekends, to pay their bills. I know some Nigerian artists, on the other hand, who swear that they will never stoop so low, no matter how needed the remuneration. Their reasoning is that wedding photography in Nigeria is, at its crudest, an interminable record of competitive ostentation, and that enough weekends spent thus engaged might turn you into something other than an artist with integrity.

Lakin Ogunbanwo’s portraits of Nigerian brides suggest no such artistic compromise. His pictures are, rather, an ingenious investigation into the elements of our culture’s wedding traditions that have been taken for granted. There are thirty-six different states in Nigeria, each with its own set of tribes, individual family customs, community ideologies and neuroses, rationales and taboos. Finances allowing, Nigerian weddings are densely peopled affairs spanning days or weeks, uncompromising in their opulence. They involve sequences of events that must never be contravened, lest the carefully apportioned roles of mother, father, sons, and daughters get disrupted or undermined. There are long lists of gifts that must exchange hands, oiling the self-worth of every relevant kin of the bride: forty tubers of yams, forty sedulously smoked aba-knifefish bellies, a large metal wedding trunk, a goat, new underwear for the bride, a fancy walking cane for the father of the bride, and so on. 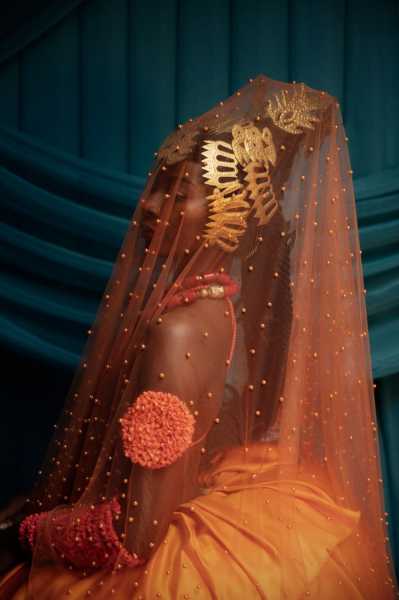 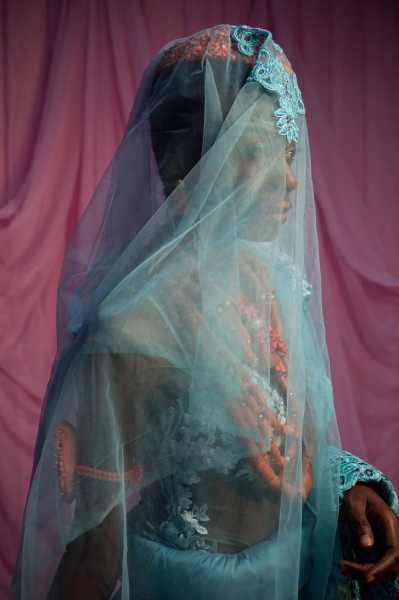 Look closely and you can see the weight of these endless traditions on Ogunbanwo’s brides. The title of the series, “Ẹ wá wò mí,” means “Come and look at/admire me” in Yoruba. The summoned eye obliges, admiring and indulging in the delectable minutiae of the brides’ luxurious appearances—the intricate beading, the elaborate gele (head-ties), the vivid colors, the imported cloth. Even as you revel in these details, though, you intuit something else: that, rather than the bride being carried and elevated, as the ceremony promises (in Yoruba, a wedding is called Ìgbéyàwó, “the carrying of the bride”), the bride is the one doing the heavy lifting—bearing the burden of the values and cultures and self-conceptions of two families at once. 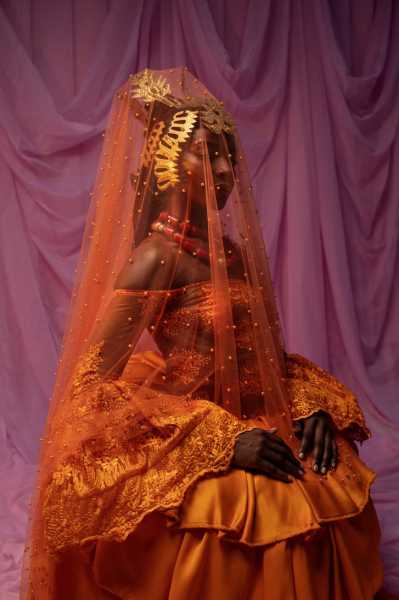 You wonder about the solitary figures in Ogunbanwo’s portraits, his shadowy highlighting of the aloof, costumed figures—their intense, unsmiling expressions, the hanging hand of a veiled reclining bride, whose back is turned to us as if in an expression of diffidence. It is a common saying among Nigerian matriarchs that you can tell the self-indulgent, greedy bride by her age at the wedding, the ideal bride being a young woman with ẹlẹ́jẹ̀ tútù, “fresh blood.” The matriarch’s counsel is antediluvian: in Nigeria today, especially among the kinds of families who can afford lavish weddings, it’s not uncommon for women to wait until their late twenties to marry. But one never wholly throws away the fables that old Nigerian women tell. Thus, for brides of any age, the ideal posture is a slightly chilled temperature of disdain. She arranges herself with demureness to gain veneration. Nigerian men, in turn, are socialized to see women’s concealment of desire as a sign of virtue, in turn stoking their own desire for her quickly fading worth. 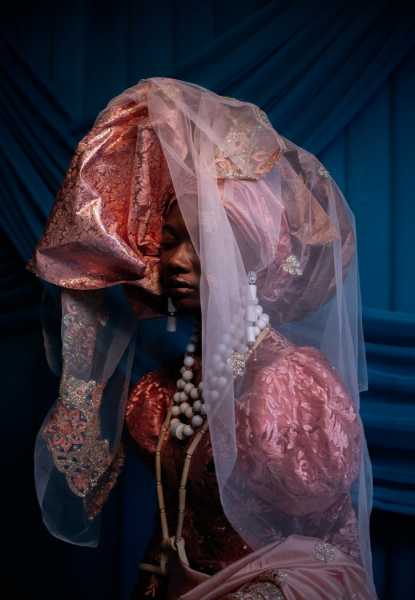 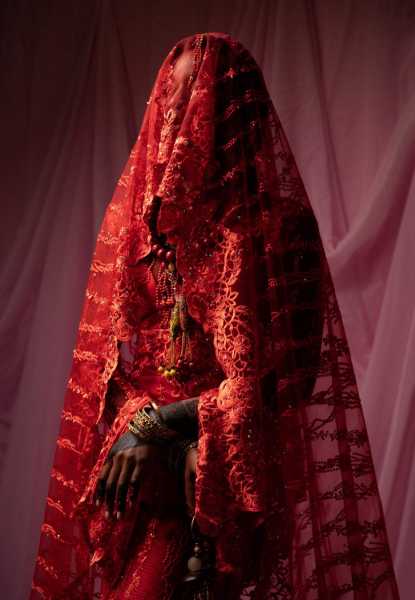 One of the preliminary bureaucracies of a Yoruba wedding, increasingly adopted by other Nigerians, involves the family of the bridegroom delivering a letter to the family of the bride. The content of the letter is always the same stale poetry—“Our son was walking past your garden one day and saw a flower, and he needs your permission to cut the flower.” The thoughtlessness with which these words are repetitively employed, offering an act of destruction as an inevitable good, is one enigma in Nigerian wedding culture. But the metaphor doesn’t end there. In the ceremonies, there are continuous evocations of blooms merging, cut flowers, fruits and their transient freshness—lilies, dressed to kill, only to flash in a moment of glory and then perish. 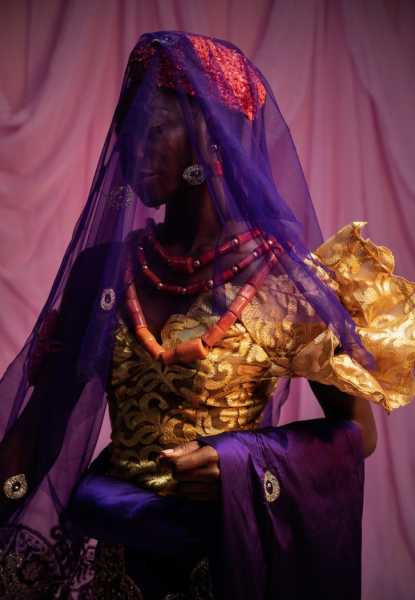 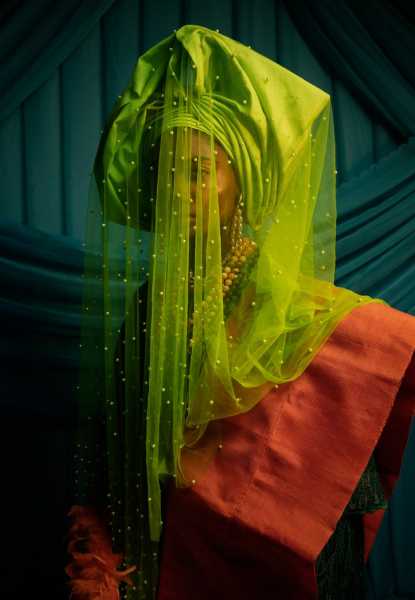 Cynosure for a single day—what is that worth, in any case? In Nigerian weddings, the bride and groom’s side each has a master of ceremonies, often called an alaga. The alaga who oversaw my own wedding, Foluso Ogunjimi, has a subversive allegory of the bride as a ripe pineapple—she isn’t dying to be harvested, splayed, and eaten, and her crown pricks disrespectful fingers. Ogunbanwo’s portraits, similarly, serve as an exposé on the dignity of the bride in Nigerian culture. I see in his pictures a challenge to the metaphor of the bride as a dying flower: the layers of exquisite adornment will soon be removed; what is borrowed must be returned. The queen will step down into commonplace humanity, into the possibly confusing paradoxes of Nigerian society (among them, culturally accepted polygamy). You can’t come away from looking at and admiring these young women without wondering, even dimly: After the jewelry is put away, the head-tie folded into a trunk . . . what then? 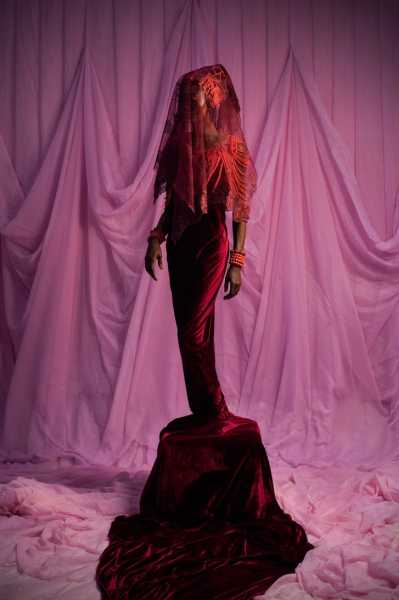 Less is more as companies explore shopping by voice

Modi Govt Hits a $10.84 Bln Jackpot Ahead of National Budget

Attack on Sputnik Staff an ‘Orchestrated’ Act to Suppress Journalism –...