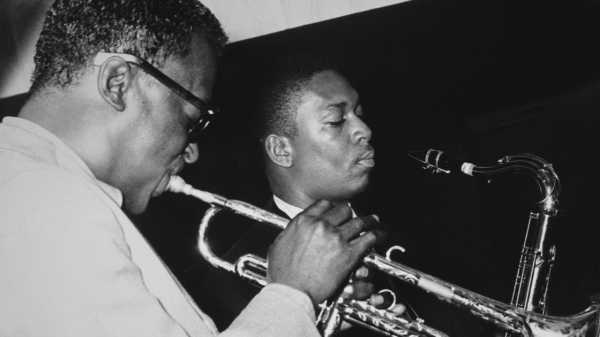 Even as the history of jazz advances through the work of new musicians, it deepens in the release of archival albums that illuminate previously hidden corners of the classic repertoire. The most noteworthy of 2018, “Miles Davis and John Coltrane—The Final Tour” (Sony/Columbia Legacy), features two of the twentieth century’s musical titans facing a crucial moment in musical history. After a prodigious yet fitful decade on the scene, Davis established himself, in 1955, with a new quintet featuring the yet-unheralded tenor-saxophonist Coltrane (like Davis, born in 1926), whose rapid musical advances were matched by the incomprehension of audiences and critics. Ready to launch his own quartet in 1960, Coltrane was persuaded by Davis to join him on one final European concert tour; the resulting music—long available on bootlegs, now largely (though not completely) collected in a four-disk set—rescues from obscurity a series of performances that are among the most daring and thrilling in the history of jazz. Davis’s solos here are bold, vigorous, and expansive, and they fill in a significant gap in his discography at a great moment in his career. (It had been a year since Davis had brought a small group into the studio and would be another year before he’d do so again.) Coltrane’s, however, are revolutionary. On the intimate scale, it’s the sideman overthrowing the leader’s preëminence and dominating the concerts, audibly shocking some in the audience and delighting others; on the grand scale, it’s a dramatic leap of jazz in the direction of complexity, vehemence, and self-excavation, a grand and joyful foreshadowing of what Coltrane would accomplish, with his own groups, when he got back to New York soon thereafter. 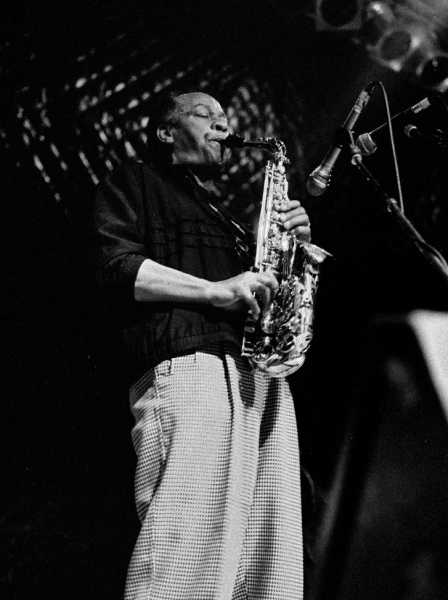 Frank Morgan plays at the Subterranean Club, in London, in 1990.

The story of Frank Morgan is painful to consider, and all the more so in relation to the vulnerable beauty of his music. Born in 1933, he was a prodigious alto saxophonist as a teen-ager and a rising star at twenty-two, burdened with sloganeering praise as “the second Charlie Parker.” He recorded one album, became addicted to heroin, and then spent the next thirty years in and out of prison and utterly outside of the music industry. But, upon his heralded return, in 1985, he played with uninhibited fluency, originality, and imagination. The release of “Montreal Memories” (HighNote), a live duet album featuring Morgan and the pianist George Cables, recorded at the Montreal Jazz Festival in 1989, highlights his agonizingly intimate artistry: blues-inflected, achingly melodic, punctuated by flurries of notes that are countable only by ears as sophisticated as his own. His style is based on Parker’s but is nonetheless utterly personal; his richly nuanced tone sounds decanted, a vintage treasure profoundly enriched by decades of painful experience. It’s easy to imagine that Morgan, if he’d have stayed in the music business from the late fifties onward, would have played with other innovators whose own careers were taking off at exactly the time that he left the scene, such as Davis, Coltrane, Thelonious Monk, and Art Blakey. In “Montreal Memories,” Morgan and Cables play a batch of compositions by or associated with Parker, several compositions of their own, and a poignant version of Wayne Shorter’s “Nefertiti” (recorded by the Miles Davis Quintet, featuring Shorter, in 1967) that suggests Morgan’s thwarted affinity for the musical changes that happened in his absence. (I’d recommend N. C. Heikin’s documentary, “Sound of Redemption: The Frank Morgan Story,” from 2014, as a useful source of information about Morgan’s life and music.)

I had long dreamed that rediscovered live recordings of the guitarist Grant Green would turn up; the dream became reality this year, with two album releases by Resonance Records, “Funk in France: From Paris to Antibes (1969-1970)” and “Slick!—Live at Oil Can Harry’s,” featuring performances from three concert tours that reveal rarely glimpsed aspects of Green’s art. Self-taught by listening to records (especially of Charlie Parker), Green offered long, horn-like solo lines of a subtle audacity, seemingly floating the harmonies with a fluidity that was as much at home in funky rhythm-and-blues-based sessions as in modernist contexts with such innovators as Larry Young, Tony Williams, and Sam Rivers. Green’s two new concert albums feature a trio, from 1969, that reclaims his copiously recorded style as an instant classicism; an electric quartet, from 1970, that reflects popular styles to which Green responds with new heat and energy; and a club date, from 1975, in which those styles are synthesized into a new tradition, with a new generation of musicians equally at home in jazz and rock. Green died of a heart attack in 1979, at the age of forty-three, and didn’t live to see these syntheses flourish and expand nor to carry them further himself.

In January, 1960, just a few weeks before the Davis and Coltrane concert tour, the twenty-eight-year-old pianist Sonny Clark, who’d been recording copiously for a few years, went into a New York studio with the bassist George Duvivier and the drummer Max Roach (one of the founders of modern jazz percussion in his work, from the mid-forties, with Charlie Parker and Dizzy Gillespie—and the teen-age Davis), under the auspices of the producer Bob Shad (who happens to be Judd Apatow’s grandfather) to record an album that, even from its most general contours, has the hallmarks of a significant personal achievement. This album, “Sonny Clark Trio—The 1960 Time Sessions” (Tompkins Square), features only original compositions by Clark (no show-tune standards or bebop anthems). In the trio format, Clark (who’d only recorded in that format once and used no originals) would have the overwhelming bulk of the solo space. Clark took full advantage of the situation to create a masterwork of balance and exuberance, with a mercurial lyricism inflected by the bebop heritage of virtuosity and the cultural heritage of the blues. Most of his documented improvisations come in the context of larger groups, from quartets to sextets, in which his solo time is brief and leaves listeners hungry for more. This recording highlights the ingenuity of a modest but unmistakable innovator. Also, the second disk, of alternate takes, offers some performances that sacrifice elegance for excitingly impulsive moments. Clark—who at the time of this session had already recorded with such essential modern musicians as Coltrane, Sonny Rollins, and Jackie McLean—died of an overdose in 1963, at the age of thirty-one. (Sam Stephenson writes movingly of Clark’s life in the book “Gene Smith’s Sink: A Wide-Angle View,” from 2017.)

The trumpeter Woody Shaw died too young, at the age of forty-four, in 1989, and, although he left a significant recorded legacy, the spate of live recordings that has emerged since his death has filled out the archive to include some of his more freewheeling performances. The new release, “Live in Bremen 1983” (Elemental Music), takes it a step further. The quartet format, with Shaw’s trumpet (and sometimes flugelhorn) as sole wind instrument, was something of an accident. The trombonist Steve Turre, a member of Shaw’s band, was absent from this concert, giving Shaw both a huge burden of solos and a vast musical canvas on which to create, aided greatly by the pianist Mulgrew Miller, the bassist Stafford James, and the drummer Tony Reedus. Shaw builds his solos gradually, holding ideas, motifs, and moods up to the light with contemplative energy that he unleashes in blasts of excitement and explosive bursts of notes that leap from the soundscape with the high-relief angularity of a cubistic extrusion. Particular thrills come from Shaw’s burst into double-time during Miller’s jauntily, lopingly polyrhythmic “Eastern Joy Dance,” his high-powered high-range effusions in “Pressing the Issue” (followed by a superb duet between Miller and Reedus), the exuberant cadenza-like fanfares of “400 Years Ago Tomorrow,” and the rocking rhythmic punctuations of Shaw’s undulating solo in “Sweet Love of Mine.” This new release offers the thrill of a still-young artist meeting the haphazard circumstances of a concert and seeming to expand his musical personality in real time—and the miracle that it was recorded.

There’s an ethical question at the root of one of the year’s best jazz releases. Nothing in the notes to “Jackie McLean Quartet—Montreal ’88” (Hi Hat) suggests that it’s authorized—no sourcing of the recording of the concert from the University of Québec (which, the notes say, was broadcast on the radio station CBC/CBOF-FM); there’s no acknowledgment or even mention of the McLean estate, the concert producers, the station’s engineers and managers, or anyone else who’s involved with the event and the recording. But for those who love McLean’s music, it’s essential listening; it captures his full, overtone-rich in-concert sound as well as his explosive solos, which, at times, reach a Dionysiac frenzy. McLean and Clark, born in 1931, and Green, born in 1935, reflect a fascinating current of jazz history. They were part of the rise, in the fifties, of so-called hard bop—a blues-oriented paring down of the intricacies of the music of Charlie Parker, Dizzy Gillespie, and Bud Powell—but, with its nudging and breaking of orthodoxies, that loose movement lent itself both to more popular forms of jazz and to the rarefied audacities of the avant-garde—sometimes in the work of the same musicians.

Like the release dates of movies, the release dates of music are often arbitrary. For instance, the Clark trio recording, recently released on CD, was issued in 2017 on vinyl (a format for which I have little nostalgia—see the recording engineer Rudy Van Gelder’s remarks on the subject). Similarly, there’s an extraordinary collection of reissues and rediscoveries, “Eric Dolphy—Musical Prophet: The Expanded 1963 New York Studio Sessions” (Resonance Records), that was issued on LP in November and will appear on CD in January. I’ll discuss it in detail then; for now, it’s worth mentioning that it features Woody Shaw in his first recording, at the age of eighteen.

Almost Half of EU States Give No-Go to New Rule Requiring...

Football Pitch-Sized Asteroid Soon to Fly by Earth Bigger Than 90%...