Home Culture The Best Bit of Steve Carell’s Turn on “S.N.L.” This Week | 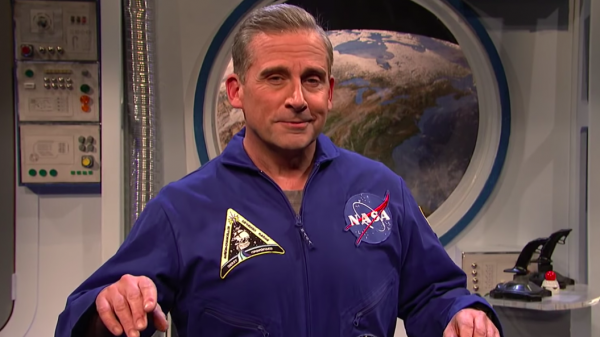 After two months of being pummelled by the news, everyone in the “S.N.L.” cast this week looked ready for a break. Throughout Saturday’s show, the presumably exhausted writers relied on throwbacks and old reliable tactics. (At times they swerved lazily into the tone-deaf.) Even before the host, Steve Carell, brought a handful of his former co-stars on stage to tease an unlikely reboot of “The Office,” the cold open dusted off a sketch that has hardly had time to gather dust: another Laura Ingraham segment lampooning Fox News.

As in the previous iteration, from two weeks ago, Kate McKinnon as Ingraham offered a crack about the kind of advertisers you get when you offend most of the country. (“Order Reverend Whitaker’s Home Dog Baptism Kit,” McKinnon said. “All dogs don’t go to heaven, unless they’re properly baptized.”) The same gag had been used in yet another cold open, from 2012, after the conservative radio-show host Rush Limbaugh called a Georgetown law student a “slut,” because she criticized the Jesuit university’s policies on contraception. (“Moist Books,” Taran Killam as Limbaugh shouted, listing off his new sponsors, “The Mosquito Breeders of America.”) “Feel Facts,” another bit from Saturday’s Ingraham segment, satirized the cable-news channel’s warped version of objectivity (“Santa is Jesus’s Dad,” “Blackface is a Compliment,” “If You Have Less Than Five Guns, You’re Gay”). In doing so, the segment reached even further back and smacked of “truthiness,” the concept popularized on “The Colbert Report,” in 2005, to explain the particular flavor of displaced authority under the George W. Bush Administration. Colbert’s “truthiness” was a word so powerfully descriptive that the definition he suggested made its way into the dictionary.

“The Colbert Report” was, of course, helmed by Stephen Colbert, Carell’s longtime friend and former colleague. The two Second City alums, both reared in Catholic families, voiced Gary and Ace, the intimate crime-fighting partners of “The Ambiguously Gay Duo,” an “S.N.L” animated short that spanned the years of Bill Clinton’s “Don’t Ask, Don’t Tell” policy. They also engaged in mock debate on “The Daily Show” in a segment called “Even Stevphen” (Carell: “The federal government should stay out of the natural disaster business!” Colbert: “You, sir, are an idiot . . .It’s time for those fat cats down in Washington to get off their keasters and pass legislation outlawing these hurricanes and tornadoes, forever.”) During their “Daily Show” tenure and beyond, the two skewered cable news punditry by wearing different versions of the same strangely angry, opinionating mask.

Carell’s particular spark as a “Daily Show” correspondent felt native to the middle of the twentieth century, even though it helped shaped the twenty-first. It’s there in Sonny Bono’s smiling bravado and false stupidity on “The Sonny and Cher Comedy Hour,” and in a young Steve Martin’s refusal to acknowledge the vise that’s squeezing his head. Carell is a comedian in this mold. He, along with the likes of Samantha Bee, Wyatt Cenac, John Oliver, and Colbert, travelled off set for live segments with real people, to create the antic masquerade that made Jon Stewart’s characterless character on that program seem more human, more reliable, and a lot funnier. Carell had a soft heart. In a technique later perfected by Nathan Fielder on his fake business-advice show, “Nathan For You,” Carell often tried to make himself the butt of the joke and largely spared the often unwitting real-world guests who appeared in his farcical reports.

Carell was often at his best, comedically, when thrown into these live situations, but not necessarily when that situation is “Saturday Night Live.” For all the episode’s seeming anarchy—a sketch reminiscent of original “Star Trek,” in which an ear of sentient corn voiced by Pete Davidson cries out for help, was loosely written and appeared to fall completely apart at the end—the show can often be fairly conservative and tightly scripted. As Tad Friend wrote, in a profile from 2010, Carell helped pioneer the last decade’s wave of heavily improvised comedies. Across multiple takes, he apparently came up with many of his lines in the 2004 cult hit “Anchorman” on set, with his only instruction from the director Adam McKay being to “say something.” This freedom really let his abilities sing. Even when his characters are at their most deadpan, their most inexplicably ignorant, there’s a wink—something real lurks beneath the mask, a hint of truthiness.

Of course, improvisation is embedded in the D.N.A. of “Saturday Night Live.” Much of “S.N.L.” ’s writers room is made up of improvisers, like Carell, who developed their ideas at institutions like the Upright Citizens Brigade. But those ideas become ossified once they have been polished and plastered on cue cards. From there, the engine of laughter in S.N.L. relies on delivery and physicality, and a rhythm that’s set, in part, before the cast takes the stage for taping. They can only do it once. This may be why the best sketch of the night had Carell, Leslie Jones, and Mikey Day as NASA astronauts onboard the International Space Station, taking questions from school children on Earth, when, all of the sudden, a problem with an air lock leads to chaos. The whole thing is a coordinated dance of floating slow-motion panic, dad jokes (“I Apollo-gize”), animal props, screens within screens, and one other astronaut (I won’t ruin it), who beats on the ship like a drum.

Carell and the rest of the cast did well here, but elsewhere the comedian turned dramatic actor who unsettled audiences in “Foxcatcher” couldn’t quite find his tempo. To be fair to Carell, as he recently told a reporter for Esquire, he hasn’t truly exercised his live-action comedy muscles in years. Perhaps they’re a little withered. And, to give the tireless “S.N.L.” writers their due, most of the season’s episodes have been quite strong. They’re off next week for Thanksgiving. Hopefully, they’ll be back on December 1st, refreshed, ready to take up their comic mallets, hear the metronome tick, and play it again.

The Magic of “Environments,” a Set of Sound Recordings That Made...