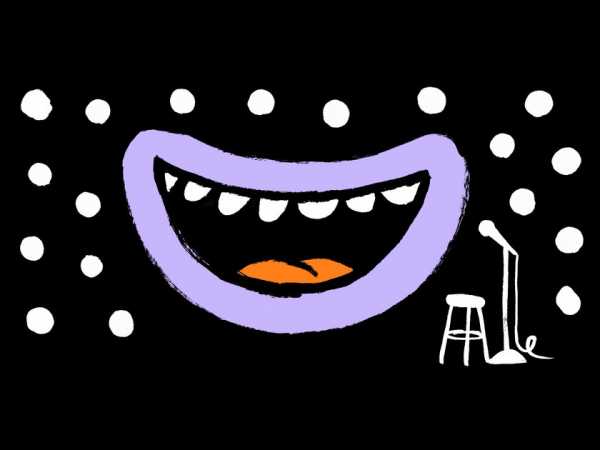 No one, to my knowledge, has attempted a systematic study to identify the funniest year on record, but I feel safe in saying that 2018 wasn’t it. But isn’t laughter the best medicine? The answer, at least according to the comedian Hannah Gadsby, whose special “Nanette” was the breakout hit of the year, is no. “I reckon penicillin might give it the nudge,” she jokes, in a thrilling set about how jokes might be the very things making us feel so shitty. O.K., ready to laugh? 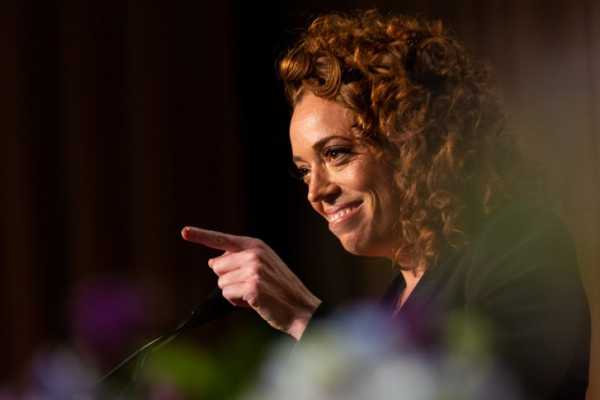 Photograph by Cheriss May / NurPhoto / Getty

Wolf’s joke about the White House press secretary’s “perfect smoky eye,” got the most attention in the aftermath of the White House Correspondents’ Association dinner, in April. But the better joke was a different one about Sanders:

Wolf’s set was judged by some as too mean-spirited; journalists lamely rushed to defend Sanders’s honor as a woman and a mother, and the W.H.C.A. issued a weaselly statement saying that Wolf’s set was “not in the spirit” of “honoring civility.” All the pearl-clutching was merely evidence of the success of Wolf’s jokes, which, in the months since—with Sanders lying ever more boldly and white women still turning out to support the President—have only gained resonance.

Adam Sandler on “That’s What She Said”

When Sandler released his comedy album “What the Hell Happened to Me?”, in 1996, I had the good fortune to be twelve years old, with a CD player and a room to laugh alone in. So it was gratifying to see the Sandman make a skillful return to standup with this year’s special “100% Fresh.” At fifty-two, he retains his impish persona and casual, mumbly delivery, often pausing mid-joke to laugh and take the air out of the moment. But the special, which was edited together from several live performances, also demonstrates his often overlooked gifts: his genre-spanning talent as a songwriter; his immense vulnerability, which is layered over with rage; and his charming self-effacement, as if, even as the featured act in front of large, adoring crowds, he’s wary of taking up too much space. In the best joke of the special, Sandler’s daughter, who’s in the sixth grade, has asked him why the boys at her school keep saying “That’s what she said” and laughing hysterically whenever she speaks. His response is that of a vulgar, nervous kid turned lame, tongue-tied dad, as mystified by parenting as he once was by sex: 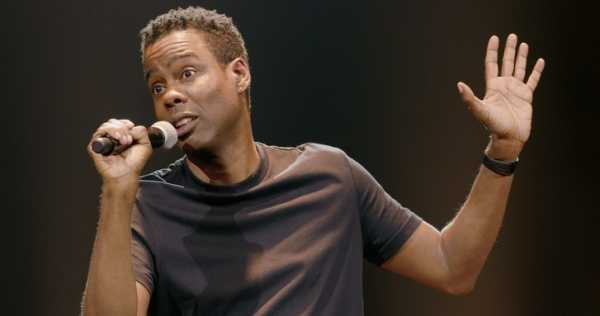 Rock is often praised for his work in the higher registers, but my favorite joke from his Netflix special “Tamborine” was a minor one. Talking about how police officers who kill unarmed black people are often referred to as mere “bad apples,” Rock says:

The line captures much of where Rock’s comedy is right now: the precision of the delivery; the workmanship of the rhythm; and the rich-guy fussiness of the word “tart,” played as a classic Rock staccato note, juxtaposed against the harder lives that he asks us to imagine.

The Country of Finland on Raking the Forest

In November, while President Trump was touring the damage of the Camp Fire in northern California, a reporter asked him what might be done to stop such wildfires in the future. Citing a conversation he’d had with the President of Finland, Trump said, of that country’s fire-prevention strategies, “They spend a lot of time on raking and cleaning and doing things, and they don’t have any problem.”

The Finnish President, Sauli Niinistö, said, as diplomatically as possible, that he didn’t recall saying such a thing. His countrymen were less circumspect, ridiculing Trump with scalding hot memes from the frigid Baltic north—pictures of themselves carrying rakes, fulfilling a kind of national duty to tidy up the forests. All the jokes were good: #RakeNews, Make America Rake Again, Rake America Great Again. My favorite was this variation, posted on Twitter by Pyry Luminen: 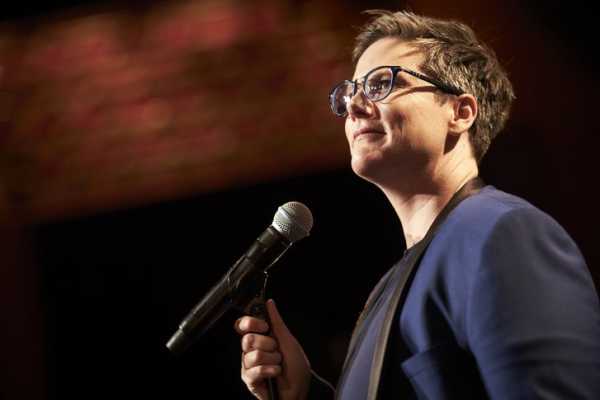 Hannah Gadsby on Identifying as Tired

In “Nanette,” Gadsby, who grew up in Tasmania, begins in the mode that made her famous in Australia—making jokes about her appearance, her sexuality, and the awkwardness that she experienced growing up gay in a closed-minded small town. But at the seventeen-minute mark she departs from icy observational patter to something hot and rageful and entirely captivating.

“I don’t think even lesbian is the right identity fit for me. I really
don’t. I may as well come out now. I identify—as tired.”

The special is about quitting comedy—about being exhausted by the medium and by the world—and it has, for this reason, been framed by some as performance art. In fact, Gadsby rejuvenates standup by making a moral statement about the self-deprecation that allowed her to disembody her trauma. Gadsby grips the audience, building immense tension while explaining how comedic tension works. At times, the audience gets so quiet that it seems as if the sound mixer has turned the balance down to some kind of negative level. “I need to tell my story properly,” she repeats at several points. Properly, in this case, means doing so with a brutal honesty that unlocks transcendent, unifying insights. It’s not some strange new thing—it’s just comedy, performed at the pinnacle of its possibility.

Accepting this year’s Mark Twain Prize for American Humor, Julia Louis-Dreyfus did a great bit on the nuisance of attending other people’s lifetime-achievement-award ceremonies. Then she reflected on the difficulty of raising two sons while working in Hollywood. It’s a classic joke delivery—what seems like earnest emotion is undercut, at the end, by a kind of blithe, self-centered meanness—but the thrill of it comes from Louis-Dreyfus’s renowned timing, the mixture of poise and nervousness that animates her best-loved characters:

“You know, when you’re a working mother, oh, you really worry about
the time spent away from your kids. You try your best to be there as
much as possible, but the truth is that you miss stuff. And you worry
that they’re gonna just get all screwed up and suffer all kinds of
angst and neuroses when they grow up. And then you get the Mark Twain
Prize, and, I gotta say, it’s worth it.”

“The Death of Stalin” on Problem-Solving

Armando Iannucci’s satire “The Death of Stalin” is about the power struggle that followed Stalin’s death, in 1953. But it’s reimagined with characters speaking contemporary English, and its milieu feels terrifyingly modern. The film shows a people ruled by the absolute worst among them: a cadre of small and bitter men whose only goal is to outlast, and outlive, the other men sitting around the table. In one scene, Stalin’s loutish son, Vasily, storms into the room to demand a role in the official memorial service:

I want to make a speech at my father’s funeral.

I want to fuck Grace Kelly—

I simply don’t care. I want to make a speech at my father’s funeral.

There are programmatic complications.

The last line is a joke to delight grammar nerds, and sold perfectly by Jeffrey Tambor, whose Malenkov is a man who hasn’t made a decision in years without looking askance for the approval of others. It’s also a tidy articulation of one of the movie’s central ideas: that in a society deadened to lies, words and punctuation can be deployed in one way to win the skirmish at hand, and then shifted around a bit to win the next one.

If anyone is looking for a good lawyer, I would strongly suggest that you don’t retain the services of Michael Cohen!

Speaking of a society deadened to lies . . . Oh well, credit where it’s due. 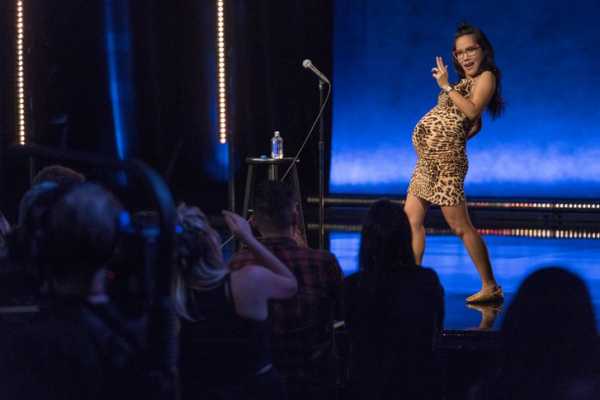 Ali Wong on Being the Breadwinner

Wong’s second standup special, “Hard Knock Wife,” came two years after her breakout hit, “Baby Cobra.” She’s pregnant again in this one—her physicality is central to her act—but she’s also considerably more famous, which is one of the hour’s principal subjects. Suddenly and quite surprisingly, she reports, she is now making more money than her husband, which is something that her mother worries will alienate him. Not so, she explains, in her great, drawn-out whisper voice:

“The only kind of man that would leave a woman who makes more money is the kind of man who doesn’t like free money.”

Gritty on Time’s Person of the Year

The rise of Gritty, the new googly-eyed orange mascot for the Philadelphia Flyers hockey team, was one of the few unreservedly good things about the past year. He began his tenure by falling flat on the ice, and was roundly mocked as weird and ridiculous. But very quickly, public opinion swung in the other direction—thanks in large part to the Flyers’ savvy social-media team—and Gritty was embraced by residents of his home city, and by young leftists across the country, for whom Gritty became the mascot of anti-fascism and a star of the resistance. Gritty was the subject of dozens of funny memes, but my favorite Gritty joke came from the creature himself. When Time asked Twitter users for nominations for its Person of the Year, Gritty had a suggestion:

Katt Williams on the City of Jacksonville

There was nothing famously funny about Jacksonville, Florida, until Katt Williams went there to film his most recent special, “Great America,” and devoted the first ten minutes to the city’s particularities. Williams, who fills big theatres and sweats like a revival preacher onstage, marvelled at the city’s bridges, its shopping malls, its local cuisine, and its weather—mundane stuff elevated, thanks to Williams’s nearly deranged commitment, to the sublime.

“Jacksonville do it big. It ain’t just hoods. They got certain
streets. If you even type it in your phone, your phone will not let
you make it there. If you type in
‘Moncrief,’ . . . your phone say,
‘Relocating.’ ”

At the mention of Moncrief, a street in a rough section of town, the audience explodes—in applause and cheers and outright shrieks. It’s crowd work at its finest—the kind of stuff that Williams has perfected while performing in cities across the country. Yet it also translates to a general viewer. Although none of the specific references mean much of anything to someone who lives outside of northern Florida, it’s the execution of specificity itself that absolutely kills. Williams’s specials feature a lot of crowd-reaction shots, and in “Great America” we see a truly diverse set of faces. “The real reason we love coming here is because when we come here, we get a real taste of what the fuck America is,” he says. “We get everybody in the same building at the same time.” It’s enough to make you feel almost patriotic.

Sokratis and Xhaka in ‘Let’s do it for Mkhitaryan’ Europa League...

‘When Endia Was India’: Pakistan Tech Minister Comes Under Fire For...