Home Culture “The Best of Enemies,” Reviewed: A Tale of Interracial Friendship Only Slightly... 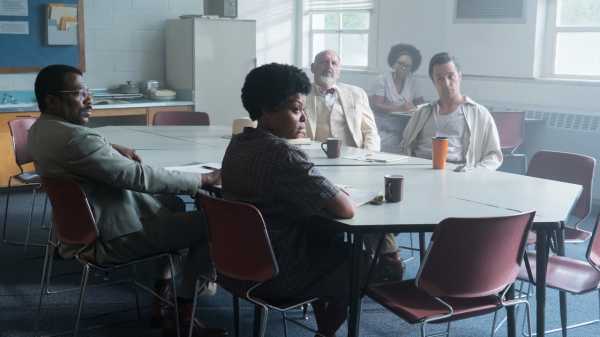 The best thing that can be said about “The Best of Enemies,” which opens Friday, is that it isn’t quite this year’s version of “Green Book.” Like this year’s Oscar winner, “The Best of Enemies” is a historical drama, based on a true story, that’s set in the Jim Crow-era South and centers on an unlikely relationship between a black person and a white racist who, as a result of that relationship, comes to reconsider his racism. The differences between the two films are significant, in ways that are to the modest advantage of the new film. But their similarities, which are marked, reflect a narrow, bowdlerized view of modern American history with which Robin Bissell, the writer and director of “The Best of Enemies,” is positioning the film.

“The Best of Enemies” is set in Durham, North Carolina, in 1971, a time when that city’s schools were still segregated. It stars Taraji P. Henson as Ann Atwater, a black resident of Durham and a community organizer who helps other black residents on issues of housing discrimination, and Sam Rockwell as C. P. Ellis, a white Durham resident who is the leader of a Ku Klux Klan chapter in the town. After an elementary school for black children is damaged by a fire, local officials—all white, all male—refuse to let these circumstances hasten school integration. Though black parents insist that their children be allowed to attend classes in a school reserved for whites, the officials force the black students back into a few usable classrooms in the damaged building.

With the town in conflict, a local white judge, hoping to defer imposing a decision (and seemingly hoping to placate white residents), accepts a suggestion from his white assistant, Wilbur Hobby (Ned Vaughn). Wilbur calls a colleague named Bill Riddick (Babou Ceesay), a black academic who has had success organizing charrettes, or conflict-resolution meetings, in other communities. Bill goes to Durham to run a town charrette on school integration—and taps Ann and C. P. to co-chair. It’s in the course of the subsequent reckoning, a rigorous, stressful, highly publicized ten-day affair, that Ann and C. P. are compelled to spend time together. C. P., in acknowledging his growing friendly feelings for Ann, must overcome a lifelong and deep-rooted hatred for black people, leading to his ultimate, and public, renunciation of his Klan membership and repudiation of white supremacy and segregation.

“The Best of Enemies” opens with images of a Ku Klux Klan initiation, accompanied by a voice-over (of the real-life C. P. Ellis, taken from “An Unlikely Friendship,” Diane Bloom’s 2002 documentary about Atwater and Ellis) talking about the sense of belonging that he got from his Klan membership. When the fictionalized C. P. is first seen, he’s chairing a Klan meeting and setting out the group’s hatreds but adding that the movement is about being “a part of something bigger” than oneself. Even here, Bissell muddies the historical waters: where, in the documentary, Ellis talks about the Klan’s main trio of enmities, toward “the blacks, Jews, and Catholics,” in “The Best of Enemies,” the fictionalized C. P. inveighs against blacks (using, of course, the N-word, which is said repeatedly throughout the film), Jews, and Communists—not Catholics. In the next sequence, a group of four Klansmen are shown shooting up the house of a white woman whom they say has a black boyfriend. It’s not clear whether they’re trying to kill her or scare her; the scene is filmed in stylized slow motion, set to Roy Orbison’s recording of “Blue Bayou.” Is the woman injured? Does she speak of the incident to the police, to friends, to family members? Bissell, from the start, is interested in perpetrators, not victims, in illustrations of plot points, not curiosity about context.

Ann’s activism is on view from the start of the film as well, as she represents a young black woman who’s facing eviction from a notorious slumlord named Abe Greenfeld (who’s never seen). When Ann leads a group of black citizens into City Hall for a meeting with a councilman, she finds that all the seats have been taken by whites, led there by Ellis, at the behest of the council president. Yet Atwater, in the documentary, describes the closed-door meeting as addressing “children being mistreated in a school” and says that, at the council meeting, it was, in fact, robed Klansmen who were there filling the chamber in full public view.

The story that the real-life Atwater tells is one that grows ever more confrontational and ever more audacious. The temptation to compare the sanitized fictionalization of “The Best of Enemies” with the historical record of the documentary isn’t a matter of mere critical diligence—it’s something Bissell virtually invites himself, both opening and closing his film with clips from that one. The clips show the real-life Atwater and Ellis discussing the events separately and then, at the end, appearing together to display their friendship. In this way, Bissell relies on Bloom’s documentary, and the real people in it, to lend an air of authenticity to a story that he has freely changed in ways that downplay the controversies that were, in fact, roiling Durham at the time.

Another historical participant who turns up as a fictional character in “The Best of Enemies,” Howard Clement (played by Gilbert Glenn Brown), tells Bloom that Durham was a site of demonstrations led by younger, more assertive black activists (he was one of them), and that these resulted in counter-demonstrations by the Klan, led by Ellis. What’s more, the city’s schools were, at the time of the events dramatized in “The Best of Enemies,” already under court order to desegregate. As a result, there was a lot to hash out in the charrette—and, inasmuch as it brought residents together for ten days, twelve hours each day, plenty of tough and substantive talk took place there.

But Bissell displays little interest in those discussions. When the charrette gets started, he offers a bland montage sequence centered on shots of Ann looking bored, while the discussions themselves are muffled, on the soundtrack, to an indecipherable walla. In the documentary, Atwater and Ellis both say that, because they were thrown together in a single office, and were going on missions together in local schools (one is briefly seen in “The Best of Enemies”), they started conversing and then kept going (Ellis says, “We begin to talk about what was on our heart”); from there, they developed a mutual understanding. I have nothing but contempt for the condescension with which Peter Farrelly, the director of “Green Book,” treated the character Donald Shirley. But it’s at least noteworthy that Farrelly has the inclination, and the skill, to make scenes of two men talking in a car dramatic. Bissell doesn’t even try.

“The Best of Enemies” isn’t silent; it’s full of plot-advancing dialogue in which conflicts are defined and challenges are pressed, but the dramatic core of the movie—the long discussions that forged the protagonists’ friendship—is displaced by a secondary, offensive story line. One of C. P.’s sons, Larry (Kevin Iannucci), is mentally disabled and living in a nearby institution, where he’s not getting the care that C. P. and his wife, Mary (Anne Heche), think he needs—and which the Ellises can’t afford to provide on their own. Knowing this, Ann pulls strings with a black nurse at the facility, securing Larry a private room and earning the Ellises’ gratitude. The altered action shifts the premise of “The Best of Enemies” drastically. Instead of being about a relationship that develops on a basis of understanding and empathy between equals, it is about the effect of an act of personal service, as if Ann had to prove to C. P. that she could be both benevolent toward him and helpful to him in order to earn his acknowledgment as an equal.

Though the movie’s ostensible subject is the politics of race, Bissell seems to be more interested in questions of class. Throughout the film, he plants small details (as in several brief conversations between C. P. and high-handed city officials) in which, it’s suggested, the town’s moneyed white leaders are stoking the racism of poor whites, which keeps them from questioning a system that keeps them disadvantaged. But Bissell gets at the theme of ostensible economic anxiety as fuel for racism only in winks and nods. Here, too, he exhibits a desire to downplay and sanitize. (For instance, a title card states that the real-life Ellis went on to become an A.F.L.-C.I.O. organizer, which is all the more significant inasmuch as the charrette itself was sponsored by the union—a fact that’s absent from “The Best of Enemies.”) Bissell exhibits a preconceived, prefabricated, predigested notion of what constitutes a movie story—or, perhaps, of the kind of story that current-day audiences are likely to embrace—and he makes the events of Durham in 1971 fit into that Procrustean template. In the process, he does a disservice to the people, the history, and his own fictional world.

Art to See This Weekend |

10 House races where health care could swing the 2018 election