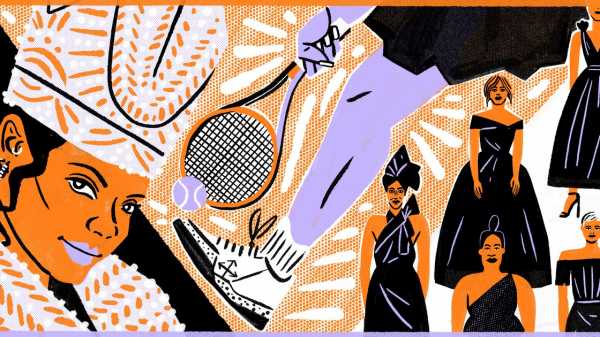 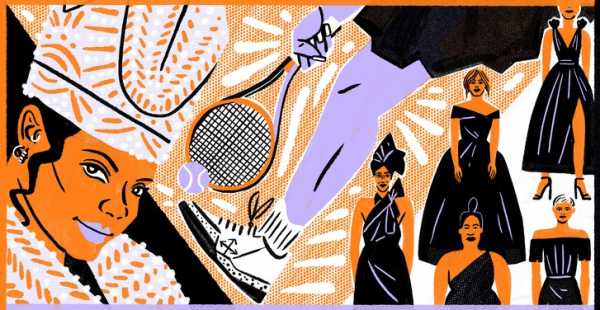 What makes an outfit compelling? Is it an artful cuff, or an oversized accessory, or the satisfying slipstream of perfect tailoring? Maybe it’s the place where wit and elegance meet; or the moment a person looks truly comfortable. This year, though, I was most transfixed by maximalism—the over-the-top aesthetic that has been making its way back onto the runways for several seasons now, thanks to the likes of Gucci and Margiela and even the formally austere Calvin Klein. It has invaded our homes and our streets with neon, glitter, shimmering mermaid paillettes, animal prints, hulking tasselled jewelry, metallic booties, an aviary of feathers. Perhaps this is a kind of giving in to the sense that we are overwhelmed—by the news, by push notifications, by our insatiable social-media feeds. If everything is already too much, why not dress to match?

When I think of who went gloriously big this year, I think of the reigning queens of sartorial maximalism: Rihanna, who wore a jewel-encrusted Margiela Pope outfit to the Catholic-themed Met Ball, complete with a foot-tall mitre that crowned her as the pop papess of the evening. Lady Gaga, who showed up to the Venice Film Festival first on a speedboat, and then in a massive pink Valentino dress that made her look like a cupcake decorated with flamingo plumage. Cardi B, who arrived at Milan Fashion Week wearing not only knee-high D&G leopard-print boots and a tiger-stripe trench coat but fuzzy feline goggles that made her look a bit like a spy at a stuffed-animal convention. (Why is it that Cardi B seems like she is just having more fun in clothes than anyone else?) But there were plenty of others, whether on the runway or big screen or tennis court, who took oversized opulence and turned it playful or provocative, twisting style excess into unexpected new shapes. Here, in no real order, are some of my favorites.

If you did not see the movie “A Simple Favor” this year, you missed out on extreme sartorial pleasure. In the comedic mystery, Blake Lively plays a sphinx-like working mother who goes missing, but before she does, she glides around in impeccable suiting, including ivory pinstripes, crisp floating shirt cuffs (not attached to an actual shirt), a fedora, a necktie and blazer with no blouse underneath, and, at one point, a lacquered walking cane. She looks like a cross between Marlene Dietrich and Mr. Peanut. And Lively did not just wear suits when the camera was rolling: she spent the entire fall making public appearances in tailoring. There was a camp quality to her choices: this wasn’t just androgynous dressing but purposeful, heightened drag, as she channelled Mick Jagger in velvet smoking jackets, wore double-breasted styles out of the nineteen-twenties, and even managed to pull off a Versace suit in neon green. She seemed to legitimately delight in her giant lapels on Instagram, and in doing so reminded us all that, at the very least, we should invest in a new blazer.

Rita Moreno at the Oscars 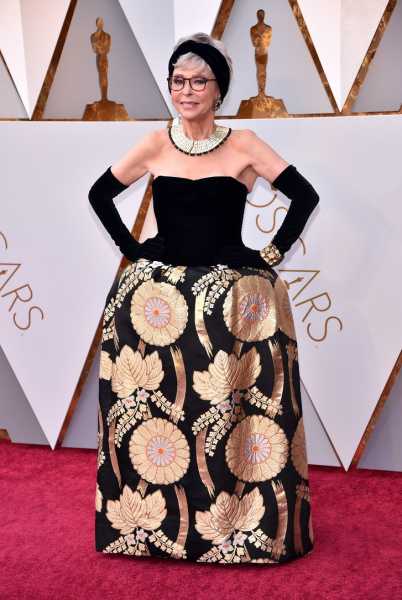 The Oscars are always a de facto fashion show, but they are rarely very interesting. Everyone is on best behavior, cosplaying matinée idols in traditional column silhouettes. There were a few standouts this year, including Annie Clark (a.k.a. St. Vincent) arriving in a black mini-dress that made her look like a chorus member in a Fosse show, the figure skater Adam Rippon’s S&M-inspired leather harness that recalled Cher, and Lupita Nyong’o in a Versace micromesh called Oroton, which falls over the body like melted metal. But my favorite dress of the night was a re-boot: Rita Moreno, the eighty-seven-year-old star of “One Day At a Time,” wore the exact same gown she wore fifty-six years before, when she won an Oscar, in 1962, for “West Side Story.” The gown, which was made in Manila out of a single sheath of brocade fabric, was understated, but her power move was not: she secured her place as one of Hollywood’s grand dames who is able to nod to her own legacy, and looked effortlessly glamorous in a decades-old dress she fished out of the back of her closet.

The thirty-year-old British designer Molly Goddard has become infamous in fashion circles for making doll clothing for adult women. She stuffs the undercarriages of her empire-waist gowns with so much frothy bobbinet mesh that their skirts don’t sit so much on the hips as hover over them like low-flying aircraft. One such dress made an unforgettable appearance this year in Phoebe Waller-Bridge’s woman-on-woman spy thriller “Killing Eve,” on Villanelle, the psychopath assassin played by Jodie Comer. The costume perfectly captures Villanelle’s flair for petulance: Comer, in a puff of pink tulle and heavy black boots, looks like a mischievous child who has run away from her own birthday party, roaming the streets like a deranged Eloise. “Killing Eve” had my favorite costuming of any new show on television this year; I loved how the outfits served as a private language between the two female protagonists, the dangerously chic Villanelle and the more subdued (but sartorially curious) Eve (Sandra Oh), the detective who is chasing Villanelle, and finds herself increasingly under her spell.

Chadwick Boseman at the Met Gala 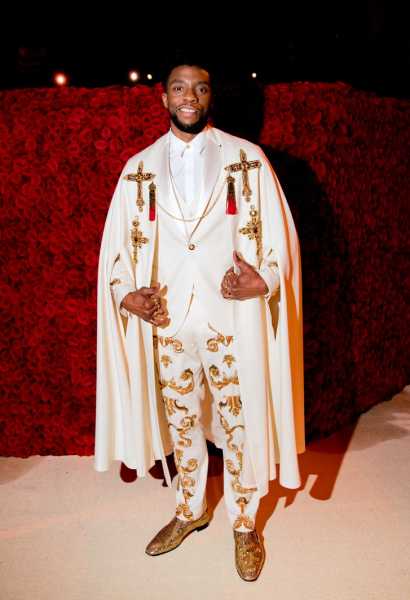 The cast of “Black Panther” spent the entire winter on red carpets, and they didn’t really make a single misstep. At the Oscars, Danai Gurira, Lupita Nyong’o, and Winston Duke arrived arm in arm (the women, dressed in shimmering column gowns, flanked Duke, who wore a classic tux accessorized with a paisley tasseled scarf), while Daniel Kaluuya arrived in a velvet tuxedo jacket the color of pumpkin-pie filling, my favorite menswear item of the night. Throughout their press run, the cast seemed to delight in appearing together, cementing their fashion dominance offscreen as well as on. (For the Style Issue, Doreen St. Félix wrote on the bold designs of Ruth E. Carter, who created the Afrofuturist “Black Panther” costumes.) But my favorite look from the Season of Panther was Chadwick Boseman’s cape-suit combo at the Met Gala. There was the heavy ivory mantle, encrusted with jewelled crosses and golden lariat chains, and those golden dress shoes, with just the slightest heel. Perhaps it was because I had just finished watching the brilliant “American Crime Story” season about Versace (a decadent re-imagining of the nineties, from which so many of my favorite menswear looks came this year), but I was so pleased to see Boseman show up in full Italianate regalia.

Serena Williams in Off-White at the U.S. Open

This year, Serena Williams collaborated with the Off-White designer Virgil Abloh for Nike, releasing her “Queen” collection just in time for the U.S. Open. Abloh, who started out as the creative director for Kanye West, has had one of the most successful years of any high-fashion designer, growing his five-year-old Off-White brand with buzzy shows in Paris, and debuting his first collection as the creative director for menswear at Louis Vuitton. But, for me, the sporty tutu he designed with Serena Williams for the U.S. Open had the greatest impact. At the French Open, Williams wore a compression catsuit that served the double purpose of aerodynamics and helping prevent the blood clots she had struggled with since giving birth. The French Tennis Federation’s president, Bernard Giudicelli, banned the suit from the court, provoking an outcry among Serena fans. When she showed up at the U.S. Open in a sleek designer tutu for her first match, it felt like a knowing gesture—if she couldn’t wear head-to-toe spandex, then she would find other ways to push forward the concept of the tennis dress. The Off-White tutu only had one sleeve—leaving her right arm free to serve—and the voluminous skirt felt capricious, lending her a gossamer lightness as she hustled across the court. She did not win the Open this year, but the outfit was a victory.

Nicholas Hoult’s Wigs in “The Favourite”

Yorgos Lanthimos’s new movie doesn’t gloss over how disgusting it must have been to live, even at the heights of royalty, in eighteenth-century England. In one scene, Olivia Colman, playing the spoiled Queen Anne, wears so much black eyeshadow (likely sourced from fireplace coal) that Rachel Weisz, playing her ambitious advisor and lover, tells her that she looks like “a badger” and must not leave her chambers. In another scene, Colman stuffs her mouth with cake, vomits, and then returns to the cake for more. The period clothing is sumptuous, but always just a little off-kilter: the corsets look terribly tight and uncomfortable, the ringlets look limp, the nightgowns all look yellowed and sweaty, and like they smell like a stable. There was very little room for glamour, even at a palace. If anyone was having fun, it was the men in Parliament, who had the garish powdered wigs to prove it. Nicholas Hoult, who plays the palace schemer Harley, provides the film’s best sight gag, wearing a dizzying array of fake hair pieces that resemble, variously, a Toblerone bar, a Persian cat, a bowl of linguine, and a young Mozart, if Mozart had hidden an entire harmonium under his hairpiece. In their brazen pomposity, they embody a theme of Lanthimos’s period piece that’s as resonant as ever in 2018: behind all the wigs and rouge and powder, no one during Queen Anne’s decadent, indulgent reign had any idea what they were doing.