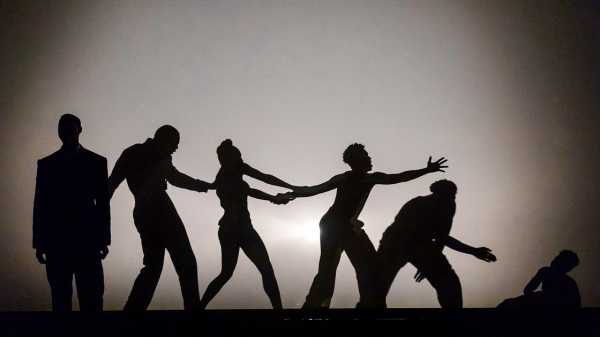 “In order to engage something with the hope of making change to it, you have to get to know something, and, when you get to know something, you have to open yourself up and allow that thing to become part of you. And that makes change,” the singer Davóne Tines said this past Monday, at the New 42nd Street Studios, in midtown Manhattan. The first day of rehearsals had just ended for his new show, “The Black Clown,” which is premièring in New York at the Mostly Mozart Festival, at Lincoln Center, on July 24th. He was speaking about his starring role in the production but also about engagement with tough racial issues, a theme at the heart of his work. “The Black Clown,” adapted from the Langston Hughes poem of the same name, is a collaborative piece of music and dance brought to life by Tines and the composer Michael Schachter.

Hughes, one of the most prominent voices of the Harlem Renaissance, best known for works such as “I, Too,” and “Let America Be America Again,” wrote “The Black Clown” in 1931. A deep cut in his catalogue, the poem was published in “The Negro Mother and Other Dramatic Recitations,” a trim collection of longer poems written as dramatic monologues. These poems are sometimes dismissed as uplifting to the point of being overly sentimental. Hughes’s aim, however, in writing the poems was to provide an accesible, “unpretentious” answer to “the modern Negro Art Movement,” which he said was “largely over the heads, and out of reach, of the masses of the Negro people.” Contemporary black poetry, he said, had “a distinct lack of rhymed poems dramatizing current racial interests in simple, understandable verse, pleasing to the ear, and suitable for reading aloud, or for recitation in school, churches, lodges, etc.” “The Negro Mother” was the result, and Hughes toured black churches and schools in the South reciting its poems. The book went into seven printings; Hughes joked that it “sold like reefers on 131st Street.”

“You laugh / Because I’m poor and black and funny,” the poem begins, speaking from the mouth of a racist trope: the acquiescent, happy-go-lucky Uncle Tom, the black clown. In the course of fifteen stanzas, Hughes moves through a short history of black America. The turns are sharp, sudden: “Strike up the music. / Let it be gay. / Only in joy / Can a clown have his day,” he declares in the second stanza, the short lines, with their simple diction and steadily falling and rising meter, giving the poem a peppy step and satisfying rhythmic crests before it sinks into the next lines, “Three hundred years / In the cotton and the cane.” The poem brims with irony and is studded with staccato, commanding exclamations—“Freedom!” “Nigger! Nigger! Nigger!” “Laugh at me!”—that serve as signposts of its evolution: the point-counterpoint of racial inequality and the promise of progress, then back to the reality of systemic oppression, and then on to, hopefully, finally, real freedom and justice.

Hughes provided stage directions—called “the mood”—for “The Black Clown,” which he suggested should be spoken “to the music of a piano, or an orchestra.” In the current staging of the work, Tines, playing the role of the clown, opens with Hughes’s instructions before speaking the first three lines of the poem. He then launches into an operatic blues rendering of the lines, with the first word a low rumble of a note, like a drumroll, before his sonorous, gravid bass baritone rises and squares off with the song. By the end of the number, Tines is joined onstage by other singers and dancers—a community of black characters that Schachter calls a “fluid ensemble,” which enriches, and reaches beyond, the single voice of the clown.

The show’s development was similarly rooted in an ensemble effort. Tines and Schachter, who first met in undergraduate school, at Harvard, came to Hughes through their mutual love of his poetry. Tines was interested in pursuing singing but was put off by the impersonal stodginess of the typical art songs, or recital fare, and wanted something more personal, so the pair set another Hughes poem—“A Black Pierrot”—to music. That song became a kind of predecessor to “The Black Clown,” a much longer work that they envisioned as a song cycle. When Tines floated the idea by the American Repertory Theatre, in Cambridge, Massachusetts, the theatre company jumped onboard, but asked for something even more expansive. Alongside the director, Zack Winokur, the choreographer, Chanel DaSilva, and the rest of the cast, Tines and Schachter created a full stage production instead.

“A gay and low-down blues,” Hughes directs, as if from the orchestra pit, in “the mood” of his piece. But he then demands “melancholy jazz,” “the spiritual syncopated,” and “gay, martial music.” When he composed the show, Schachter kept these directions—and the content of the poem—in mind but also maintained a degree of creative independence from the text. “It was a big priority for us that, if you knew the poem or if you were to just read the poem alongside the stage, you could feel like it was bringing it to life, but also that it could work on its own,” he told me. Hughes himself would agree with this approach. Hughes was frequently accompanied by live bands when he performed his poems, and he wanted the music to serve not just as background sound but as a commentary on the work, so he invited improvisation.

In the course of the seventy-minute show, Schachter’s score tracks the changing tones of the poem’s stanzas, likewise shifting in tempo and style. The numbers—performed by an eleven-piece band, inspired by the kind that one would see in a nineteen-thirties dance hall—jump from the blues to minstrel-performance music, from spirituals to military marches, and from gospel to sixties- and seventies-style R. & B. and funk, with a twanging banjo and thumping drum, keyboards, and electric bass. Tines’s solos, foundationally operatic but with some flexibility to the protean score, serve as a through line, and his spoken parts bookend the piece, grounding the production in the text. (The libretto is all Hughes, consisting solely of words taken from the piece alongside two classic spirituals.)

DaSilva’s choreography is alternatively jocular and disquieting. Dances inspired by the moves of Cotton Club greats, like Cab Calloway, Josephine Baker, and the Nicholas Brothers, are juxtaposed with more cartoony minstrelsy steps—flung limbs, hops, tumbles, and stumbling gaits. In one of the more brutal numbers, inspired by a stanza about the false promises of the Emancipation Proclamation, performers dance with chains and gleefully jump rope with a giant noose. In choreographing that section, DaSilva said that she aimed to use objects that were functional—rope, chains—but “have a layered meaning behind them” because of the hateful legacy of slavery, racism, and white supremacy in America. In another scene, the performers pantomime a plantation scene behind a backlit screen, their silhouettes a conscious nod to the work of the visual artist Kara Walker. “One of the beautiful things about working with a poem is that there are moments when you can be very literal and it feels epic or abstract in another way,” Winokur said, and the work of translation that the production undergoes—translating Hughes’s text, of course, as well as translating a whole history and multiplicity of experiences, and translating objects and symbols from one context to another—leads to a theatre piece that feels resonant with and woke to the past and present of black America.

But, for all of the production’s dealings with the context of Hughes’s page, there’s also the context of the stage to contend with. Theatre is an art form dominated by white voices: predominantly white casts, white audiences, white critics. If, in his poem, Hughes confronts blackness as it exists in the white imagination, along with racial performance and the burden of “double consciousness,” as W. E. B. Du Bois termed it, just three decades earlier, then how will such a production play for white audiences today? Tines says that was an element he was aware of, first in performing the show in Cambridge, before chiefly white audiences—something that may be the case yet again as the production comes to Lincoln Center. “Just as this piece is as much about the people onstage and giving them space and focussing the attention on everyone’s individuality and also a collective community, it is also hopefully not ignorant of the people we hope to receive it,” Tines said. “If we’re being so fastidious about who is onstage, we also have to be very aware of who is not onstage, and who this is for.” But it isn’t simply awareness that the production achieves; it challenges its audience members, creates enough of a tension between frivolity and terror to make them uncomfortable, as in the noose scene, or the plantation scene, which, DaSilva said, is meant to hold viewers accountable as witnesses to tragedy.

One can easily imagine, after seeing “The Black Clown,” the production renewing general interest in the neglected text, perhaps alongside Hughes’s more popular lyrics, and, even more, living a long life alongside it. “One of the great things about doing this production is the opportunity to speak that poem to as many people as possible. And it continues, and, I think, will continue to be needed,” Winokur said. “The words are timeless, which is amazing and horrible at the same time,” DaSilva said.

Tines’s clown wanders through the centuries, occasionally bolstered with hope and merriment but so often buffeted by misfortune. His is not just an individual narrative but a snippet of a collective history. Who is the clown, really? Is he some version of Hughes or simply an anonymous stock character? A version of Tines or another black man with a history and background that exists somewhere beyond what’s portrayed onstage? The answer, the creative team said, is all of the above. “Every time I watch it, I see the black men close to me,” DaSilva said. “Sometimes I am my brother,” Tines said, of stepping into the clown character. “Especially in 2015, racialized police brutality was at the forefront of the news . . . everything was about thinking about my brother. He was just two states away, driving down the road, and he’s a six-foot-six large black man, and it’s, like, if he gets caught in the wrong context, who knows what could happen? So sometimes on that stage I’m living out the possibility that he can be freed from that context.”

At the end of his poem, Hughes doesn’t promise freedom from societal or institutional oppression, but he does give his clown hope and freedom from that double consciousness. The clown’s final exclamation in the poem reclaims a sought-after selfhood. The lines are spoken by Tines simply, without fanfare, as though we’ve finally arrived, after so long, at the most basic and obvious truth: “I was once a black clown / But now— / I’m a man!”

Huddersfield job too good an opportunity to turn down – Danny...