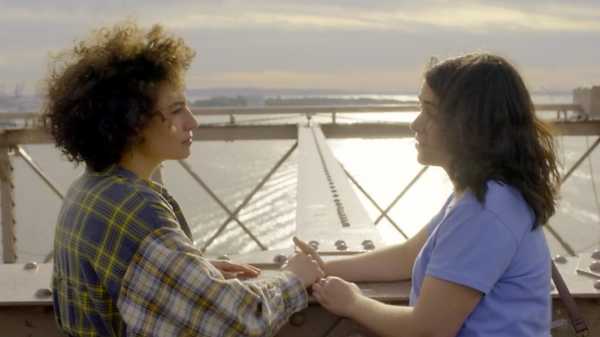 “Broad City” ended on Thursday night in exactly the way one hoped it would: with its two heroines dragging a toilet across the Brooklyn Bridge. There was a purpose to this task—Abbi and Ilana, the plucky codependent B.F.F.s at the heart of the show (played by the show’s creators, Abbi Jacobson and Ilana Glazer) had discovered a fully-functional, ten-thousand-dollar Japanese toilet sitting in a pile of garbage on the street. It’s not like they could just leave it there. One man’s trash is another woman’s treasure, especially when it comes with a heated seat and a bidet. “God, every time you are sprayed, you are reborn,” Ilana says, of the luxury-toilet experience, her eyes flashing with the zeal of a convert. The only problem is that no cab will pick up two women carrying a used john, and that Uber is surging sixty times the normal rate. The pair’s only choice is, naturally, to wheel the commode back to Brooklyn on a skateboard.

The plan is visually absurd—it makes a deliberate reference to Marcel Duchamp’s Dada urinal art—but to Abbi and Ilana it makes perfect sense. Their New York is a New York of endless possibilities, where unplanned adventure is simply a byproduct of walking out of one’s front door in the morning; it helps that they have always counted on each other as accomplices, sisters in shenanigans, permanent partners in crime (though most of their transgressions are misdemeanors at best). In the show’s final season, though, the inseparable duo is finally being separated. Abbi is preparing to move to Boulder, Colorado, for an artist’s residency. Ilana is also moving on, though not from the city—she is starting grad school to become a therapist. Both women are taking giant strides forward, but this means they have to consciously uncouple.

For five seasons, “Broad City” was at its heart a love story, albeit an unconventional, mostly platonic one, about two twentysomething women with paper-thin boundaries. Abbi and Ilana experience the city the same way, as a neon funhouse where anything can happen, where some strangers are absolutely delightful and others will vomit on your shoes. When they make the decision to part ways, it feels like not only the cleaving of a unit but the end of a way of moving through the city. At some point, on the Brooklyn Bridge, the two pause to stare out over the East River underneath a lavender sunset. Ilana tells Abbi, in a tearful goodbye, “I’ve never felt so cool . . . really, not as when I’m with you.” “Broad City” has always done funny better than sentimental, but this line got me: Abbi and Ilana were each other’s hypewoman and promoter. It is difficult to think of them navigating their respective obstacle courses alone.

The real Abbi and Ilana met in an Upright Citizens Brigade improv class, when Glazer was nineteen and Jacobson was twenty-three. In a competitive, male-dominated comedy scene, they gave each other an essential gift from the beginning: they were kindred comedienne spirits; they made each other feel cool. When they started “Broad City” as a YouTube series, in 2009, there was no road map for their brand of comedy, and no clear pathway from Internet fame to major success; they became one of the first Web series to make the leap to television. (The other show in this vein, “High Maintenance,” still airs on HBO and shares a similar affection and empathy for New York.) In 2015, when I followed Jacobson and Glazer for a profile as they made the second season of the show, they told me that they credited their success to the fact that they always presented themselves in meetings as an unbreakable partnership. “Some people are scared of us,” Glazer said, “and some think we are dumb little girls. But the way we combat that is just being ourselves in meetings. And having a partner makes that so easy, because when all else fails, I’ll just talk across the table at Abbi like we are chilling by ourselves.”

When I spent time with the women, I remember feeling baffled that they were not more exhausted, given all they had taken on with their show. They were obsessively hands-on in making “Broad City,” overseeing the writers’ room, starring in every episode, and editing every frame themselves. (I sat with them in an edit bay as they argued over the visual continuity of a hot dog.) But they seemed to provide an endless source of energy for one another, each one serving as the other’s mobile recharging station. After “Broad City,” the two will continue to produce shows together—they recently signed a first-look deal with Viacom—but they are also ready to branch out on their own. Glazer is booking film roles and is working on her standup; Jacobson recently published a memoir, and will produce a reboot of the women’s-baseball film “A League of Her Own” under her own shingle.

At the very end of the finale, before Abbi heads to the airport (in true “Broad City” fashion, the duo do this as a misogynistic taxi driver grows impatient and calls them “dumb broads”; they fire right back at him), she tells Ilana, “I don’t even feel like I was alive before I met you.” What a blessing, to find someone else in this numbing, neurotic, noisy city who makes you feel like you really lived here. In the final thirty seconds of the show, we see a pair of female friends exiting the subway, making small talk about d.j.’ing a party. Then, right after them, the camera pans to two other friends, gossiping about getting drunk on a rooftop. Then the perspective pulls back to show two more friends, and two more, until the final wide shot hovers over a Union Square Park filled with duos. The message is clear: Abbis and Ilanas are everywhere. Symbiotic relationships will continue to fuse, and grow, and change. “Broad City” was a wild, ferocious, expansive show that ran amok through the city, but, in the end, it was about the intimacy that comes from making mischief in the presence of another.

The past 72 hours of Brexit ridiculousness, explained