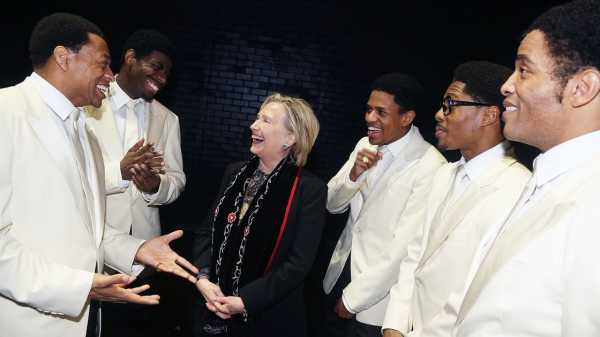 A few weeks ago, I was speed-walking through midtown Manhattan toward the Cort Theatre, where Glenda Jackson is starring in “King Lear.” It was a few minutes before curtain, and I was running late. As I approached the marquee, I spotted a black S.U.V. on the curb and fleetingly wondered whether someone fancy was attending the show. Greeting my friend on the sidewalk, I heard someone tell me, “Move to the right, please.” I glanced left and saw Hillary Clinton, in a gray pants suit, stroll into the theatre. “Welcome, Madam Secretary,” a publicist told her.

Clinton is an avid theatregoer. In the past few months, she’s been at “The Cher Show,” “To Kill a Mockingbird” (with Bill), and the opening night of “Network.” The day before “King Lear,” she had attended “Ain’t Too Proud,” a jukebox musical about the Temptations, and then posed backstage with the actors. (“Got to practice my snap last night with the best in the business,” she tweeted.) At “King Lear,” a ritual that I had seen in viral videos played out in front of my eyes: an entire theatre’s worth of New Yorkers and tourists gave her a pre-show standing ovation, as she smiled and waved from her aisle seat. The performance artist Anna Deavere Smith, who sat directly in front of her, looked on with uncharacteristic shock. I’m sure Clinton loves Broadway, but I do wonder if she sometimes goes just for the pick-me-up.

Or maybe I’m projecting. Maybe everyone is projecting, as we always do when Hillary Clinton is involved. Midway through “King Lear,” the audience burst into applause at Gloucester’s line, “ ’Tis the times’ plague, when madmen lead the blind.” I looked back and saw Clinton clapping along, too. What must it be like to be her, of all people, watching a crazed, vain king with scheming adult children destroy his kingdom? (Sam Gold’s production, among a number of other problems, unnecessarily doubles down on the Trump factor with a tacky gold-leaf set.) Or is it poignant for Clinton to see, in Jackson, a woman getting a crack at a traditionally male job?

Imagining what goes on inside Clinton’s head has been a national pastime for at least two decades. The latest person to make the attempt is the playwright Lucas Hnath, whose new work, “Hillary and Clinton,” is the only Broadway play at which Clinton is guaranteed not to show up. As Joe Mantello’s production begins, the actress Laurie Metcalf walks onstage in a turtleneck and faces the audience holding a microphone. Your first thought is, Why isn’t she blond? But that’s the point—to wash away the idea that this is a “Saturday Night Live” sketch or HBO-movie-style reënactment. Hnath’s notes in the script make this clear: “It might be tempting, very tempting, to play these characters as imitations of the real deal. An actor playing Bill Clinton might be very tempted to mimic Bill’s signature southern drawl and lip bites just as an actor playing Hillary might want to emulate her cadences and laugh. Don’t do it!”

“Instead,” Hnath goes on, “imagine that the audience watching this play has never heard of the Clintons or Obama and that this is an opportunity to create these characters anew. An audience watching Shakespeare’s Henry V has no reference point for the real Prince Hal, nor does the actor have much of a reference point for what he looked like or sounded like.” Shakespeare had even more leeway when it came to King Lear, based on the ancient King Leir, who supposedly ruled Britain around 800 B.C., and whose tale dates back to Geoffrey Monmouth’s 1135 volume, “History of the Kings of Britain.” In other words, he was even less of an immediate figure to Elizabethan audiences than Queen Elizabeth I is to us, and Shakespeare felt free to use his story to say what he wanted about power, madness, old age, and folly.

Hnath, the dauntless author of “A Doll’s House, Part 2,” wants to do something similar with characters who are much closer to home. As D. T. Max wrote in a recent New Yorker Profile of Hnath, “Although his play was inspired by the Clintons, it is pointedly not a Broadway version of a bio-pic. Reality becomes a springboard for a roundelay of ideas.” Hnath begins with a distancing device. Metcalf, not quite yet in character, asks us to imagine the infinite universe, in which there may be any number of planet Earths. Then, she says, imagine an Earth “like this one but slightly different,” in which a woman named Hillary is running for President. She is married to a man named Bill, who has already been President. “And now imagine that I’m that woman named Hillary who lives far away from here.” Action.

It’s not hard to imagine multiple Hillary Clintons on multiple Earths, because there are already multiple Hillarys on this one. There’s Hillary the Feminist Pioneer, Hillary the Policy Wonk, Hillary the Hawk, Hillary the Striver, Hillary the Wronged Wife, Hillary the Deep-State Puppet Master Who Did Benghazi, Hillary the Victim of the Vast Right-Wing Conspiracy, Hillary the Grandmother, and, of course, Crooked Hillary. During her first run for President, she often said, “I may be the most famous person you don’t really know,” a paradox that hasn’t gone away. Hnath’s play is set during that campaign: it’s 2008, in New Hampshire, and Hillary is convinced that she’s about to lose Tuesday’s primary to Barack Obama. In a moment of weakness—or perhaps cunning—she calls Bill (John Lithgow, who, true to the stage directions, doesn’t attempt a Southern drawl), previously banned from the campaign trail. Bill wants Hillary to connect with voters through emotion, like he does, while her adviser Mark Penn (Zak Orth) argues for Hillary the Policy Wonk. She seems to agree with Mark, telling Bill, “Feelings are a terrible reason for doing anything,” to which he responds, “Yeah, but your problem is people don’t think you have them.”

“Hillary and Clinton” isn’t the most politically savvy play in the world—Hillary’s hapless maneuverings with Barack (Peter Francis James) are particularly far-fetched—but politics seem to be of secondary interest to Hnath. The Hillary that he has chosen to highlight is Beleaguered Hillary Who Can’t Catch a Break, a persona that falls conveniently close to Metcalf’s character on “Roseanne.” This Hillary knows that, no matter what she does on the campaign trail, she’ll always be Hillary Who Got Cheated On but Didn’t Divorce Her Husband. (Could it be that the 2016 election finally washed away that truism, only to replace with it something even more absurd and dispiriting: Hillary Who Lost to Donald Freaking Trump Even Though She Got More Votes?)

Watching “Hillary and Clinton” a week after spotting the genuine article at “King Lear,” I thought about the day after Clinton conceded the 2016 election, when a woman named Margot Gerster went hiking through the woods of Chappaqua to take her mind off the results and, miraculously, ran into Clinton taking a contemplative walk of her own. Like Lear, Hillary had been exiled to the wilderness, but she had all her wits, and it looked like a beautiful day. It seemed as if some new, private Hillary had emerged from the ashes of Hillary the Presidential Candidate, whose job was, now, to soothe our pain and her own. Hnath’s version of Hillary has pain, but she’s way past allowing herself to feel it. “I’m not not a broken mess because I’m trying to play like I’m perfect,” she tells Bill. “It’s just that those things that are supposed to make me cry just don’t make me cry anymore. I just don’t have it in me.”

Ultimately, nothing that comes out of this Hillary’s mouth hasn’t been said about her already, though there’s a thrill in seeing “Hillary” say it. At the end of a brisk ninety minutes, Metcalf’s Hillary returns to the starry sky, the infinite universe in all its possibilities. “I’m starting to realize,” she tells us, “that I live in one of the universes where I don’t win.” Historic figures have historic fates, and Hillary’s—right now, in 2019—is that of a private citizen who has time to wander in the woods and see Broadway shows, while an alternate-universe Hillary is too busy being President. If “King Lear” is about losing one’s mind, “Hillary and Clinton” is about losing, and how difficult it is to accept its finality.

The Hillary in the play, despite her foreboding, tries to gauge what the public thinks of her, so that she can change how the public votes. The sum of people’s perceptions, she seems to feel, is like a second Hillary, an untamable twin who walks around causing havoc, “while the real me is off asleep in bed—and then I get blamed for it all when I wake up in the morning.” Of course, in Metcalf’s faux Hillary, we’re watching a version of this twin nightmare unfold on a Broadway stage. Late in the play, even after Hillary has won New Hampshire, she still senses that something is “off.” “It’s like I’m trying to stare at the back of my own head,” she says, “trying to see something that I just can’t see, but if I could catch a glimpse of it, then I would know what to do.” Like Lear, she’s straining against her own self-blindness. This other Hillary, whose head she’s trying to see—is that the real one? Is she trekking through the woods? Is she sitting at another theatre down the street, applauding a different play? Is she unknowable even to herself? How does she seem so close, so accessible, and yet always so far away?

George Groves fears that a domestic fight with James DeGale will...

Why were Phil Foden and Jadon Sancho not called up by...