Home Culture The Brutal Logic of Stardom in “Once Upon a Time … in... 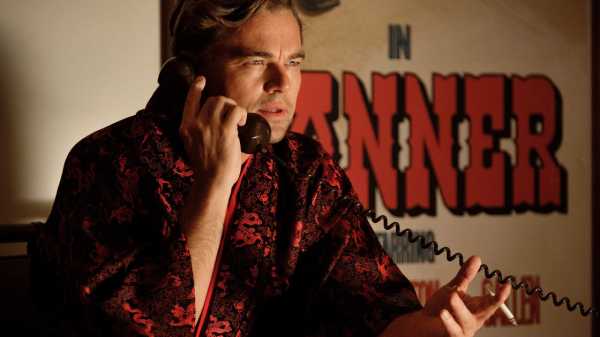 In Quentin Tarantino’s new movie, “Once Upon a Time … in Hollywood,” a fantastical retelling of the Manson murders, Rick Dalton (Leonardo DiCaprio) is an actor who has seen better days. In the late fifties and early sixties, he was the star of a TV Western called “Bounty Law,” but, in grasping at the dream of having, in his words, “some sort of rinky-dink movie career,” he has strayed off the path of success. It is now 1969, and he has been relegated to a string of minor guest spots playing the bad guy on whichever schlocky TV shows will have him. With his tight stovepipe pants, clipped hair, and cowboy boots, he is a man behind the hip, shaggy times, a liquor drinker rather than an acid dropper. A mostly functional alcoholic, he wanders Los Angeles—from his house, on Cielo Drive, in the Hollywood Hills, which he bought when he was more prosperous, to studios for the occasional day of filming, and to various watering holes, ferried around by his confidant and employee, Cliff Booth (Brad Pitt). Cliff was once Rick’s stunt double, but, in a decline that parallels his friend’s fading fortunes, now serves mostly as his boy Friday.

Since its opening, in late July, “Once Upon a Time …” has significantly outperformed expectations at the box office, a success due, in part, to the movie’s high-wattage cast and Tarantino’s own tenacious status as an auteur who is still able to draw an audience to the big movie that isn’t part of a comic-book franchise. “Once Upon a Time …,” however, pulls a neat trick by casting DiCaprio and Pitt—two stars who have rarely, if ever, experienced a devaluation in their bankability—as Hollywood players struggling to hold on to their former glory days. As the movie opens, we find Rick and Cliff at Musso & Frank Grill, where Rick is told by an agent, Marvin Schwarzs (a deliciously over-the-top Al Pacino), that, if he wants to retain some semblance of a career, he needs to go to Italy to make Spaghetti Westerns. “It’s official, old buddy,” Rick tells Cliff, in tears, as they exit the restaurant. “I’m a has-been.” Getting into the passenger seat of their car, he spits through clenched teeth, “No one knows who the fuck I am anymore.” DiCaprio, who is sensational in the role, plays the scene largely for laughs—we understand that, even at the height of Rick’s career, he was a hack. But there is also poignancy here, and a sense of the ruthlessness of Hollywood, whose denizens are devastated when the industry almost inevitably turns away its gaze. There is a flip side to this devastation, however. As Cliff and Rick arrive back at Cielo Drive, Rick’s young, glamorous new neighbors—the celebrated director Roman Polanski (Rafal Zawierucha) and his beautiful wife, the actress Sharon Tate (Margot Robbie)—drive past them in a stylish sports car. “Holy shit, that was Polanski,” Rick tells Cliff. “Here I am, flat on my ass, and who’s living next to me? The director of Rosemary’s fucking Baby.” He is buoyed by the idea that a return to fame is still within grasp. “I could be one pool party away from starring in a Polanski movie!”

“Once Upon a Time …” is a movie that deals in doubles. We have, of course, Rick and Cliff, with the latter’s body literally standing in for the former’s. We also have Jay Sebring, Tate’s former fiancé, and Polanski, who are both, as a guest at a house party notes, “short, cute, talented, and look like twelve-year-old boys,” and who have been swapped for each other in Tate’s affections, and may yet be swapped again. But, to Rick Dalton and Sharon Tate, the actors in the story, the most significant double of the self is the one that appears onscreen. Fame isn’t just a matter of social currency; it is about being seen. “At this very moment, the town was full of people lying in bed thinking with an intense, an inexhaustible, and almost raging passion of becoming famous if they weren’t already famous, and even more famous if they were,” Alfred Hayes wrote, in 1958, in his tough, spare Hollywood novel, “My Face for the World to See.” This relentless desire is, in Tarantino’s estimation, the most powerful structuring principle of Hollywood.

When the desire for fame is satisfied in the film, it creates moments of pure delight. At one point, Tate slips into a matinée of the Dean Martin vehicle “The Wrecking Crew” to watch herself in the role of “Miss Carlson, the klutz,” as she puts it to an unimpressed ticket seller. With her bare feet up on the seat in front of her, she sneaks looks at the audience to gauge their enjoyment, and, during a fight sequence, reflexively mimics her own moves in the film. Robbie plays the character with a tentative, subtle sweetness. The fact that the actress in the onscreen movie is not Robbie but, instead, the real—and, in real life, soon to be murdered—Sharon Tate not only adds to the tenderness of the scene but goes a bit further toward making Tarantino’s point: an actor onscreen is herself but also outside herself, a conduit for her own fantasies and those of others.

When an actor fails to make this magic happen, it can be torture. While Tate is at the theatre, we see Rick playing yet another bad guy on a pilot. Hung over from overindulging the night before (“Eight whiskey sours!” he rages contritely), he screws up his lines and throws a fit in his dressing room. “If you don’t get these lines right, I’m gonna blow your brains out tonight!” he growls at his reflection in the mirror, his face in the glass eerily turned away to one side, dead-eyed. He is speaking to himself but also to his recalcitrant double, who refuses to gel into a coherent form for the camera. It’s a hoot of a moment, but there is menace there: in Hollywood, if you can’t succeed in being known by the world, you might as well be dead. Even Cliff, a laid-back tough guy (Pitt’s relaxed performance is a marvel), ultimately despairs at no longer being used on set. In one scene, at Cliff’s behest, Rick begs a director to give his friend a job, saying, “You can do anything you want to him. Throw him off a building, set him on fire. Do whatever you want. He’s just happy for the opportunity.” For a stuntman, the work of being a double involves literal brutality. More than anyone else in the movie, perhaps, his figure reveals the disposability that animates Hollywood.

As Rick and Tate have their acting adventures, Charles Manson’s acolytes are camped out at Spahn Ranch, an old Western-town TV-and-movie set, readying themselves to perform their own lasting and unforgettable spectacle. (From here on, please watch out for spoilers.) Manson has instructed them to attack the Polanski residence, killing Tate and anyone else in it. Near the end of the film, as the armed killers come up Cielo Drive, they encounter an inebriated Rick, who is wearing a robe and swilling frozen margarita from a blender, and who angrily shoos them off the property. (“God-damned fucking hippies!”) The Mansonites are angered, but they’re also starstruck once they realize that Rick is the long-forgotten hero of their childhood-TV mainstay “Bounty Law.” “I can’t believe that asshole was Jake Cahill!” they marvel, their rage mixed with love as they invoke the name of Rick’s television character.

It is at this point that Tarantino shifts history through an ingenious plot twist. The would-be murderers decide that, instead of attacking the Polanski house, they will kill Rick. “We grew up watching TV. Every show on TV was about murder,” a Mansonite says. “My idea is, we kill the people who taught us to kill. This is Hollywood. They live in pig-shit fucking luxury. I say fuck ’em.” Fame and violence are indelibly connected, and the stars of the screen must be punished for the wealth that funds their sumptuous life, which amounts to nothing but blood money. Crucially, however, even in this formulation, the psychic hold that Rick has exerted on these wayward American children owes its force to the pleasures of the screen. They want to murder Jake Cahill as much as they want to murder Rick Dalton. It is at the moment when the actor is marked as a target worthy of killing that he once again becomes a star.

As the killers approach Rick’s house, the song “Twelve Thirty,” by the Mamas and the Papas, plays. The melody is a little sad but sweet: the song’s protagonist has left New York behind (“Everything there was dark and dirty”) for the warmer pastures of Los Angeles. “At first so strange to feel so friendly / To say good morning and really mean it / To feel these changes happening in me / But not to notice till I feel it.” There is a distinct irony in the scoring of the sinister activities onscreen to this soundtrack, but the alignment between visuals and music also makes another point: Hollywood might try to kill you, but it is still beautiful. Even in its violence, it holds more promise, more potential dazzle, than any other place. The city’s topography, too, which the movie traverses—an arid desert buoyed by explosions of flora and brush and succulents, by the shimmering blue of swimming pools and of the ocean, by the web of freeways twisting along its length and width—feels both brutal and thrilling.

As “Once Upon a Time …” draws to a close, Cliff and Rick decimate the intruders, in a show of shocking carnage, and Cliff, injured, is carted away to the hospital, leaving Rick to bask in the triumph. The gates of the Polanski residence finally open, Eden-like, and Tate’s disembodied voice, piped in through an intercom, invites him inside. Rick is back on top again, at least briefly the toast of Cielo Drive. And, though we understand that this moment might not last, we also grasp that, even in its brevity, it might be worth all the bloodshed in the world. “It may be rotten. . . . but I like it and I wouldn’t have it any other way,” the failing actress in Hayes’s “My Face for the World to See” tells the novel’s narrator, who grasps what lies at the heart of her love for the town. “I began to understand then that for her it was the best of all places she could be in,” he writes, “an arena perfectly suited for a play in which she was always the permanent heroine whether she succeeded or whether she failed.”

Pompeo Arrives in Iraq 24 Hours After Rocket Attack on Iraqi...

Hogg challenges Scotland to play biggest game of their lives