Home Culture “The Burial of Kojo,” Reviewed: A Boldly Lyrical Portrait of a Young... 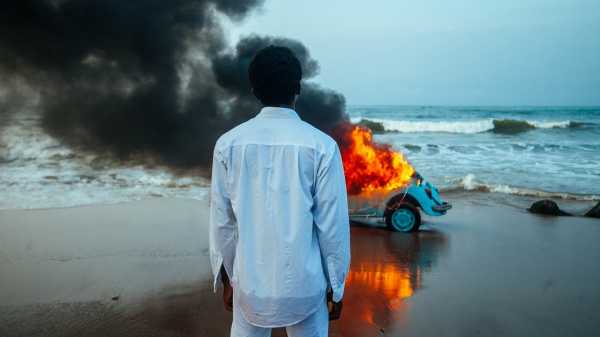 Once more, the world of streaming makes widely available a wonderful movie that would likely have made it into only a handful of theatres nationwide. This Sunday, March 31st, Netflix will release “The Burial of Kojo,” the first feature directed by Blitz Bazawule, who was born and raised in Ghana and is now based in Brooklyn. (Kudos to Ava DuVernay, whose company, Array, is distributing the film.) In its bold and limpid lyricism, the film is both an anguished delight in itself and an exemplar of dramatic freedom that should stand as a model for some filmmakers and a reproach to others.

“The Burial of Kojo” is centered on a young girl named Esi (Cynthia Dankwa), who lives with her mother, Ama (Mamley Djangmah), and her father, Kojo (Joseph Otsiman), in a wondrous but poor part of Ghana—a village of small houses built on struts in a lake and connected to the shore by narrow, slatted walkways. Esi tells her story—narrated in voice-over by her grownup self (played by Ama K. Abebrese)—with a tone of reminiscence that restores the perspective of her childhood, and Bazawule directs the film with a subjectivity to match. Esi’s childhood world is one of dreams, visions, and premonitions, which burst onto the screen with a spare, frank simplicity, reflecting the precocious yet ingenuous sensitivity with which she confronts implacable realities. Her father, Kojo, is a loving ne’er-do-well, who takes Esi around the lake in his boat and spins tales that are entrancing but aren’t always of the brightest cheer: he’s haunted by dreams that, in turn, are based on bitter days he spent living in the city, when he and his elder brother Kwabena (Kobina Amissah-Sam) were rivals for the same woman. Kwabena married her, but, on their wedding day, she died in a car accident, and the bond between the two brothers, who had been combative rivals since childhood, was definitively poisoned.

Esi’s parents are faring poorly, subsisting on the meagre earnings Ama brings in as a seamstress, when, one day, Kwabena turns up with brash promises of a better life in the city. Kojo—against Ama’s better judgment and in the face of Esi’s forebodings—uproots them from the lake village and brings them to a small apartment in Accra. There, Kwabena hatches a scheme to pan and dig for gold on the off-limits site of a mine where he used to work, which has been taken over and shut down by a Chinese company. He also lures Kojo into the risky plan. Meanwhile, Esi’s life at home—spending time with her mother in a small apartment, far from the adventures and splendors of lakeside life—is occupied with the TV, on which they watch telenovelas dubbed into English and find that the shows reflect, crudely but revealingly, some of the dramas of their own lives.

The world is full of signs and symbols to those who are alive to them, and Esi’s years in the country have made her intensely perceptive and intuitive. There, a visit from a blind shaman, bringing a gift of a sacred white bird and a premonitory tale of a menacing crow, instilled in Esi a sense of looming danger that her new circumstances threaten to realize. Working with the cinematographer Michael Fernandez, Bazawule reveals Esi’s inner world in images of poetic audacity, sometimes turning them upside down, employing bold color shifts (for instance, tinting the sky electric pink), using fast and slow motion and digital superimpositions, or running footage backward. He presents the practicalities of physical life with a vital visual energy, as well: showing shimmering reflections of sunlight on water, creating casually sculptural stagings of dramatic confrontations and even of conversations, finding strikingly original angles from which to regard banal doings (the entry into a new home, a sale of gold, a visit to a police station, a rooftop conversation), and transforming contemplative gazes of fleeting moments into indelible experiences. (Bazawule is also a musician, whose stage name is Blitz the Ambassador, and he composed the film’s score.)

The sites and conflicts that Bazawule depicts in “The Burial of Kojo” have broader social and political resonance, as well. Among the hard specifics of Ghanaian life that he explores is the economic colonialism of newly arrived Chinese businesses (which is also seen in the Chadian director Mahamat-Saleh Haroun’s great film “A Screaming Man,” from 2010). He displays the petty corruption of the local police force and the corruption of higher levels of law enforcement by the new business interests proliferating in the country. He shows the contrast between the growing and modernizing city and the citizenry left to struggle desperately in its shadows—and the personal abuses and cruelties that poverty and despair incite.

In its brief span of an hour and twenty minutes, “The Burial of Kojo” briskly and deftly evokes a tightly interwoven web of relationships fraught with long-standing tensions and grudges that leap beyond personal ties to evoke age-old curses and spiritual realms. The bonds of love are tinged with regret and resentment, but, in Esi’s warm retrospective view, it remains vital and inspiring nonetheless. Her adoring but clear-eyed and rueful recollections of her father, her admiring and tender vision of her mother, her memories of silent alertness to the dangers of miscreants and troublemakers in their midst, and her too-early confrontation with the emotional and social realms of grownups converge in an intricate vision of a turbulent and violent legacy that both roils and powers a lifetime of creative passion. Bazawule offers a portrait of a dawning artist that catches the early flame of artistic inspiration from within.

US and France to Boost Saudi Radar Systems in Bid to...