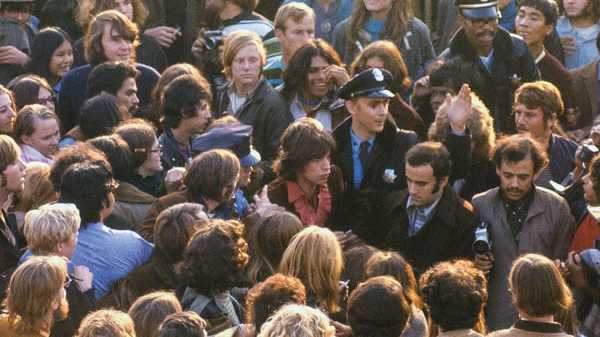 In December, 1969, the photographer Bill Owens got a call from his friend Beth Bagby, who occasionally shot photos for the Associated Press. As Owens explains in his new photo book, “Bill Owens: Altamont 1969,” the A.P. wanted to hire him for a day “to cover a rock and roll concert in the Altamont hills.” The Altamont Speedway concert had been reported as the West Coast’s response to Woodstock. It was also part of a return to public view for the Rolling Stones, who had started touring again, after nearly two years off the road. Their efforts began in July, with a free show in London’s Hyde Park. The concert was a success, an entirely peaceful event financed and filmed by Granada Television. Security had been provided by a ragtag group of people wearing leather, who the Stones mistakenly believed were part of the Hells Angels. Emboldened, the Stones hired the man who organized the Hyde Park concert, Sam Cutler, to work on an American tour in the fall of 1969.

The band wanted to keep filming their concerts, and, on the recommendation of the cinematographer Haskell Wexler, hired the filmmakers Albert and David Maysles, who had just released “Salesman,” a documentary about Bible salesmen. The Maysles filmed a Stones concert at Madison Square Garden, in November; happy with the outcome, the Stones decided to invest in a full-length film, for a fifty per cent share of the profits. In “Altamont: The Rolling Stones, the Hells Angels, and the Inside Story of Rock’s Darkest Day,” published in 2016, the music journalist Joel Selvin notes that the Stones wanted a “big finish” for the film. They learned that Jefferson Airplane and the Grateful Dead were planning a free concert in San Francisco’s Golden Gate Park and decided they’d join the bill. The mayor of San Francisco at the time, Joe Alioto—who was, according to Selvin, “very anti-hippie”—worked to squash the plans. Sears Point Raceway, in Sonoma, was suggested as an alternative, but that site was owned by a company called Filmways, which had just lost money over a tour date that the Stones cancelled. As payback, the company wanted distribution rights for any film that came out of a Sears Point Raceway concert. The Stones rejected this deal and chose the Altamont Speedway, between the cities of Livermore and Tracy, with security to be provided by the Hells Angels. Construction at the Speedway began on Thursday, December 4th. The show was on Saturday. 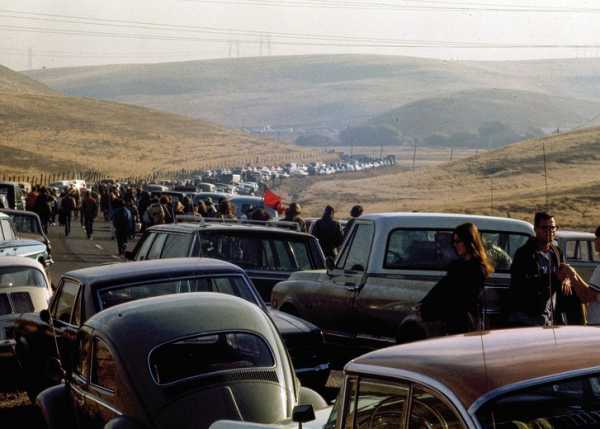 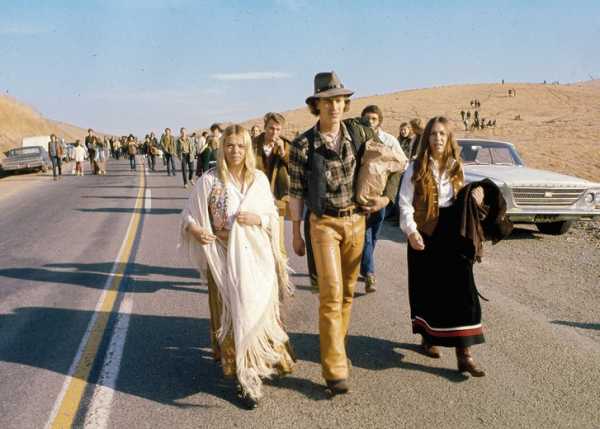 The short planning time and lack of official announcements meant that journalists who wanted to cover the event weren’t sure where to go, or when. There was no commuter path to the speedway, so people walked along the highway. Bill Owens arrived early and found a lighting tower to shoot from, above the fray. (Lights were scheduled to be attached to those towers but never arrived.) In his photos, you see a vast spill of people without borders or shepherds. Nothing had been done to turn the site into a venue, so most concertgoers could barely see the stage. The only protection for the bands was a piece of sisal twine stretched in front of the crowd; it had disappeared by the time Jefferson Airplane began playing, in the late afternoon. December brought a California winter—milder than an East Coast winter, but still winter—and the audience didn’t have the verve or color of the Woodstock crowd. Nudity was outweighed by corduroy. 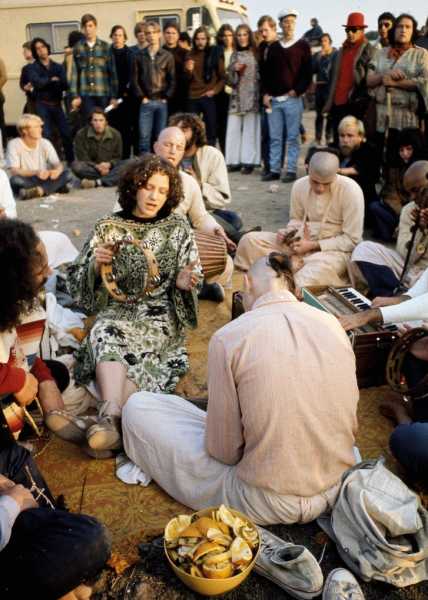 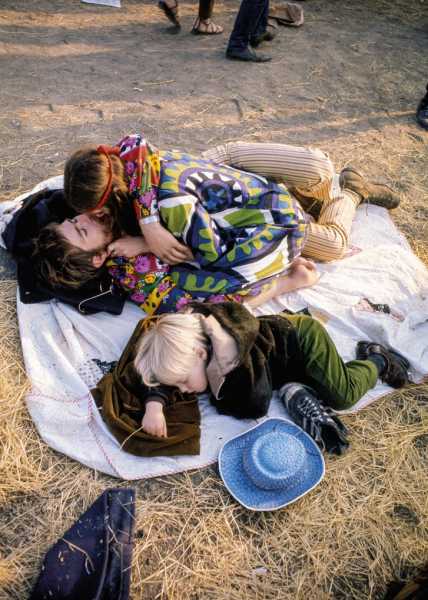 The critic Greil Marcus, then in his mid-twenties, got there early in the morning. “I went right to the front and sat down with the person I’d come with,” he told me. “It felt perfectly safe, except for acid casualties, and then the Angels, but people were unfriendly, territorial, selfish—just a weird reversal of Woodstock, where I’d been just a few months before. And completely different from the crowd at the Oakland Arena, where the Stones played at the beginning of their tour.” Fights began to break out. As Saul Austerlitz reports in his account, “Just a Shot Away: Peace, Love, and Tragedy with the Rolling Stones at Altamont,” published last year, “Four or five plainclothes Alameda County sheriffs stood around backstage, their weapons in their holsters. After intervening in one of the early fights between the Hells Angels and fans, they took note of how thoroughly outnumbered they were, and thereafter ceded the field to the Angels.” 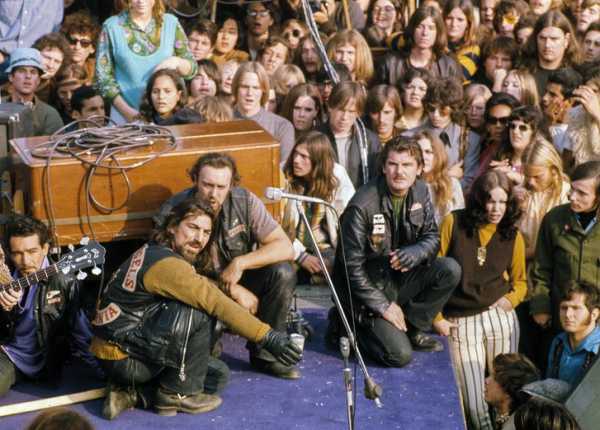 Members of the Hells Angels crouch together on stage. 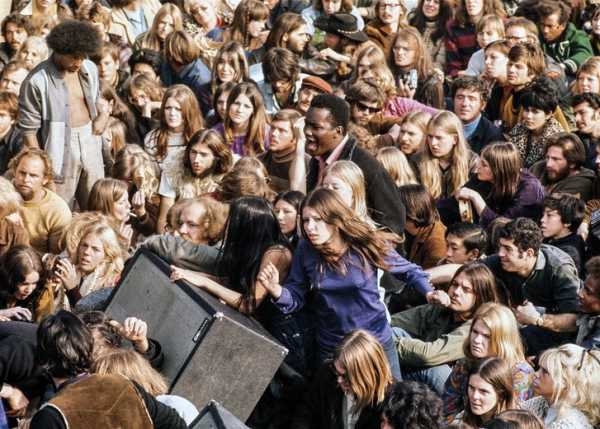 Altamont attendees cluster near the stage.

The Angels had been invited by Cutler and Rock Scully, the manager of the Grateful Dead, who had connections to the Angels in San Francisco. But, when the Dead reached the speedway, bad acid and wine had been flowing for hours, and the injuries were stacking up. The band decided not to play. In the years since, this absence has spared them from much of the blame for what unfolded. 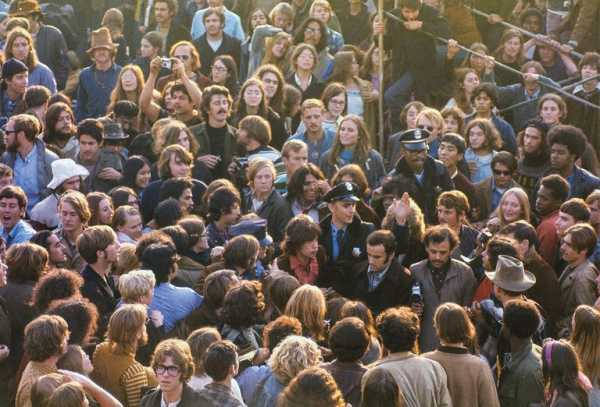 Police lead Mick Jagger through the audience at Altamont Speedway.

Dozens of people at the concert were beaten by the Angels, with fists and pool cues and whatever else was at hand. Marty Balin, of Jefferson Airplane, was knocked unconscious. Stephen Stills was stabbed repeatedly in the leg, with a sharpened bicycle spoke, by an unknown Angel. Four people died. One young man drowned in an irrigation ditch. Two men were killed in a hit-and-run after the show. A black eighteen-year-old named Meredith Hunter was stabbed multiple times by Alan Passaro, one of the Hells Angels providing security, and died before the Stones had finished playing. 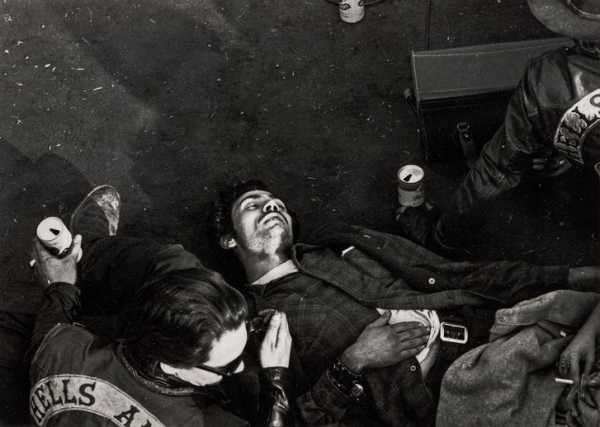 An unidentified man passed out at Altamont Speedway.

A few weeks after the concert, Rolling Stone published an exhaustive report titled “The Rolling Stones Disaster at Altamont: Let It Bleed.” The piece opens with an account from a witness who later testified at Passaro’s trial. An unidentified Angel, the witness said, “reached over and grabbed the guy beside me”—Hunter, that is—“by the ear and hair, and yanked on it, thinking it was funny, you know, kind of laughing. And so, this guy shook loose; he yanked away from him.” Another Angel “hit him in the mouth,” the witness went on, and Hunter tried to run, “and four other Hell’s Angels jumped on him.” According to the witness, after Passaro stabbed Hunter in the back, Hunter “pulled out a gun and held it up in the air you know. . . like that was kind of his last resort.” Passaro stabbed him in the neck, and someone, likely Passaro, stabbed him in and around the kidney. Other Angels kicked Hunter, stood on his head, and hit him with a garbage-can lid. Before Hunter died, audience members lifted his body onto the stage and the Angels pushed it off. In a photograph of the moment taken by Beth Bagby, Mick Jagger, looking dismayed, raises a hand to his face.

Several months after the Rolling Stone story appeared, the Stones, through a lawyer, sent the Hunter family ten thousand dollars, which Hunter’s sister Dixie Ward described to me as “a very nominal sum.” To this day, the Stones have never spoken to Hunter’s family.

“Gimme Shelter,” the movie that the Maysles brothers made about the Stones, was released one year after Altamont; the second half of the movie is dedicated to the concert. Hunter’s murder ends up providing a sort of climax, but his name is never said out loud in the course of the film. What’s more, although the Rolling Stone report on Altamont made it clear that Hunter was running from the Angels, “Gimme Shelter” implies that Hunter was the real threat. Toward the end of the movie, the footage of Altamont stops abruptly, and the film cuts to Jagger and David Maysles sitting in an editing suite. Maysles replays the footage that was just shown and slows it down to isolate and point out Hunter’s gun, set against the white crocheted dress of Hunter’s girlfriend, Patti Bredehoft. We are treated to a closeup of Jagger, looking sad. The film cuts back to footage of Altamont, where we see Hunter lying on a stretcher, dead. An unidentified bystander says that Hunter “pulled out a gun.” “The Hells Angels took away the gun. One of them has it now; he showed it to me,” he says. Four months before the movie opened the Cannes Film Festival, Passaro was acquitted of Hunter’s murder.

“Altamont—it could only happen to the Stones,” Keith Richards said to the Rolling Stone reporter Robert Greenfield, in 1971. Years later, in his memoir, “Life,” Richards emphasized the Grateful Dead’s role in planning the concert and blamed “the boneheaded, hard-nosed San Francisco council” for nixing the plan to play at Golden Gate Park. “In the film you can see Meredith Hunter waving a pistol and you can see the stabbing,” Richards writes. “He had a pale lime green suit on and a hat. He was foaming at the mouth too; he was as nuts as the rest.” Hunter was not foaming at the mouth, unless Richards got a view nobody else reported. But Richards was echoing the story told by “Gimme Shelter,” which is that Altamont happened not to Hunter or his family but to the Stones. Altamont is where Hunter lost his life. “Gimme Shelter” is where he lost his story.

Ward has never seen the film. “I couldn’t watch it,” she told me. “And my children wouldn’t watch. It’s horrible, because I see him running in my sleep.” 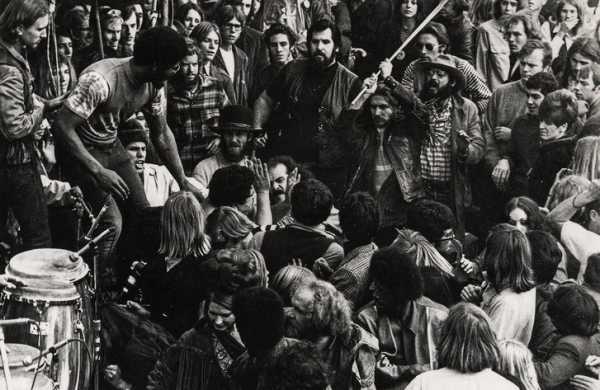 A member of the Hells Angels beats an unidentified man at with a pool cue.

Even before night fell, Bill Owens photographed the Angels battering a concertgoer with pool cues and swarming the stage during Jefferson Airplane’s set. Like the Grateful Dead, Owens decided that he should leave. The Stones didn’t, though, and, if they hadn’t performed, Hunter wouldn’t have had a show onstage to approach, and Passaro wouldn’t have had a boss to protect. Of course, things might have also gotten worse if the headliner had bailed. But the show went on, Hunter was killed, and, in the decade that followed, both the Dead and the Stones became bigger and more successful.

A great deal has been written about Altamont in the years since, but so much of the language around it has the exonerating blush of the passive: the sixties were ending; the Angels were the Angels; it could only happen to the Stones. There may have been larger forces at work, but the attempt to see Altamont as the end of the sixties obscures the extent to which what happened that night had happened, in different ways, many times before, and has happened many times since. “A young black man murdered in the midst of a white crowd by white thugs as white men played their version of black music—it was too much to kiss off as a mere unpleasantness,” Greil Marcus wrote, in 1977. Hunter does not appear in Owens’s photos and he is only a body in “Gimme Shelter.” It is worth returning to that day and trying to see Meredith Hunter again.

Bill Owens’s photographs of the Altamont Speedway Free Festival are collected in “Bill Owens: Altamont 1969,” out this spring, from Damiani Books.

Antarctica has lost 2.71 trillion tons of ice. Here’s what that...

Wimbledon 2018: We look at what we learned from another memorable...

Merits of Maj Gen Soleimani in Fight Against Daesh Are Unquestionable...