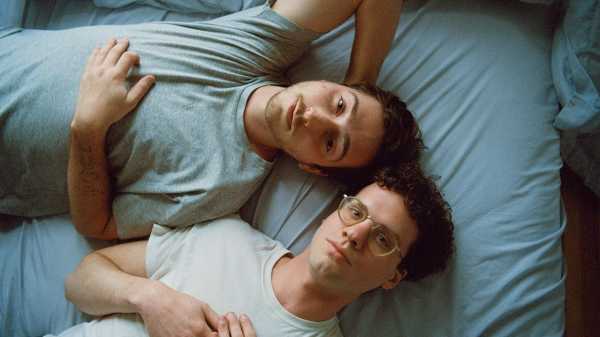 No new band of the past few years has sneaked up on me as completely as Whitney, a young Chicago act that uses warm guitar tones and wistful falsetto to make songs that sound like summer: sometimes summer afternoons, bright and free and endless-feeling, but more often late summer nights, the kind where the air is cooling and you can feel the season changing, second by second, into a nostalgic memory. This vibe is particularly strong on the band’s second album, “Forever Turned Around,” which was released on August 30th. Even more so than on Whitney’s 2016 début, “Light Upon the Lake,” the performances and production have an intimacy that lets you feel like you’re sitting with the band in a cozy, lamp-lit studio, or around a campfire.

When I first heard Whitney, I didn’t expect its music to become a fixture of my listening life. I pegged it as another example of “Spotify indie” (or “algorithm indie”): music that, for whatever reason, we don’t call “pop” but that has the right sonic signature and is suitably non-abrasive to find favor, however temporary, on the streaming services that exercise such a strong role in our listening landscape. Much of what ends up on playlists like Ultimate Indie, All New Indie, The Indie List, Essential Indie, or Indie Chillout feels good at first—it’s certainly fine enough background music for coffee shops—but quickly turns out to have little going on beneath the surface. I’ve been through this cycle of disappointment with songs enough times that I mostly avoid “indie” playlists and bands that superficially strike me as marked by their influence. I’m not saying that this is fair, just that it’s part of how I experience music today.

But Whitney slipped passed my skeptical defenses. Now, when I listen to the band’s music—and I go through long stretches where I do so every day—I don’t think cynical thoughts about the algorithm (at least not very many). I sing along and let myself feel transported and young. I smile. Whitney makes people smile, I’ve noticed. At this year’s Pitchfork Music Festival, in July, the band was joined onstage by a small crowd of fellow-musicians for the “na-na-na-na-na-na” sing-along that closes out “Golden Days,” an ode to the pull of nostalgia. This impromptu backup crew included the rapper Ric Wilson, the Japanese all-woman punk group CHAI, the singer-songwriter Tasha, and the rock musicians Soccer Mommy, Snail Mail, and Lala Lala. On-the-spot festival collaborations often have an awkward, forced air. During “Golden Days,” everyone onstage looked extraordinarily, goofily happy, in that particular way that entering the world of a song—and feeling it let you in—can do.

On a warm afternoon in August, I met Julien Ehrlich and Max Kakacek, who form the band’s songwriting and recording core, for lunch, in Chicago’s Logan Square neighborhood. The two have been making music together since they were in their early twenties and playing in the Smith Westerns, a now-defunct band that was much beloved in the music blogosphere of the late two-thousands. Talking over a booming dance playlist, I asked how, if at all, they thought about their relationship to genre, and especially the way that genre labels get reconfigured by Apple Music, Spotify, and streaming services. “The Internet is the final say of whether or not your band is going to do very well,” Ehrlich said. When they were in the Smith Westerns, the big MP3 blogs, such as Stereogum and Fluxblog, were trendsetters; today, those sites have been almost completely eclipsed by streaming, the inner workings of which are hard to make out. “The Internet is random now.”

As for “indie,” “We’ll only use the word ‘indie’ if we’re criticizing our own work,” Ehrlich said. “Seriously. Throughout writing ‘Forever Turned Around,’ we would be, like, ‘This idea should work on paper, but we need to change it so it doesn’t sound quite as indie.’ ”

Kakacek put down a taco and chimed in. “My two least-favorite words back-to-back are ‘breezy indie,’ ” he said.

Ehrlich grinned. “Or, like, ‘nostalgic indie.’ Really anything paired with ‘indie.’ ”

What did it mean, I asked, to avoid being “too indie”? How do you make sure that your music transcends the Spotify playlist that the world is going to find you on? Ehrlich and Kakacek said they weren’t sure, and that it was hard to talk about. High standards are part of it. A willingness to toss things out. Striking a balance between caring intensely about the arrangements and the production—the new album is full of lush strings, horns, and organ, and the band tours as a seven-piece—but remembering to give each song a core, something that would still be there if the outer trappings were stripped away.

Viewed one frame at a time—measure by measure, riff by riff, lyric by lyric—it’s difficult to point to anything that marks Whitney as a band making music in, or for, 2019. The act’s main influences are from the sixties and seventies, and it shows. Whitney’s lyrics contain almost nothing that explicitly grounds the group in the American present, focussing instead on more timeless experiences: how love and friendship can sustain us, how love and friendship can fade, feeling lost, feeling found. But it’s possible to feel the ambient anxieties and exhaustions of now hovering at the songs’ edges. It’s a line here, a line there: “There’s fire burning in the trees,” “Should have seen this coming somehow,” “I don’t feel alive, but I’ve been living,” “There’s got to be another way,” “Anything could happen.” The songs never dwell at length on these sentiments, or flesh them out with specifics; they just graze against them before moving on in search of refuge. This dynamic may account as much as anything else for the band’s appeal. Its songs feel like little hideouts from history, carefully constructed by people in the process of living through it.

Two Fridays ago, in honor of the release of “Forever Turned Around,” Ehrlich, Kakacek, and Will Miller, who handles the band’s horn arrangements, performed pared-down versions of their songs on the tiny stage in the back of Shuga Records, a vinyl- and cassettes-only record store in Wicker Park. (Vinyl, too, represents a popular form of refuge, partial and incomplete, from the defining forces—algorithms included—of contemporary life.) In a bizarre sign of the band’s growing popularity, and implicit recognition of its easy-listening surface appeal, Chicago’s new mayor, Lori Lightfoot, had proclaimed a “Whitney Day,” encouraging people to attend album-launch events, like this one, throughout the city. The audience spent most of the set watching in rapt silence, visibly grateful to be taken away for however long the music would last.

155 Crewmembers of US Aircraft Carrier Theodore Roosevelt Have Covid-19 After...

Black voters want 2020 candidates to talk about the economy. At...